For the second time in just over two months, members of the United States Capitol Police slipped on black mourning bands on Tuesday and watched as the flag-draped remains of a fellow officer were hoisted up the steps of the Capitol to lie in honor inside the building he died protecting.

Gathered under its soaring dome, President Biden, grief-stricken officers and leaders of Congress remembered Officer William F. Evans, who died after a car rammed into him as he stood guard on the Capitol plaza this month, as an unflappable 18-year police veteran and doting father of two who loved Legos, Harry Potter and a good laugh.

“He was defined by his dignity, his decency, his loyalty and his courage,” said Mr. Biden, who invoked the tragedies of his own life to try to comfort not only Officer Evans’s family but an agency still reeling from the deadly mob violence of Jan. 6.

“Never has there been more strain,” the president said, “on the shoulders of Capitol Police.”

Three months after being violently overrun by a pro-Trump mob targeting Congress, the 2,000-person police force that protects the Capitol is facing arguably the most daunting crisis in its nearly 200-year history. An overwhelming mix of grief, trauma and fear suffuses its ranks, and its future is uncertain as lawmakers and security officials reassess how to safeguard the nation’s legislative branch.

In addition to the death of Officer Evans, 41, two officers died in the days after the riot. Officer Brian D. Sicknick, who was besieged by the rioters trying to overturn Mr. Biden’s election victory, lay in honor in the Rotunda in February. The other officer took his own life, unable to cope in response, his family said. Nearly 140 police officers were injured, while many more suffered less visible harm such as being targeted with racist slurs by the mob. Others have described being racked by guilt, turning in their weapons for fear of suicide or wrestling with anger at the agency’s top brass for failing to heed warning signs about the coming violence.

Congress has pledged to invest billions of dollars to expand and harden the force, but the precise scope and timeline of an overhaul is unclear. For now, the agency remains understaffed and without a permanent leader, and lawmakers continue to pursue a series of grueling after-action studies that have both retraumatized and embarrassed the department. 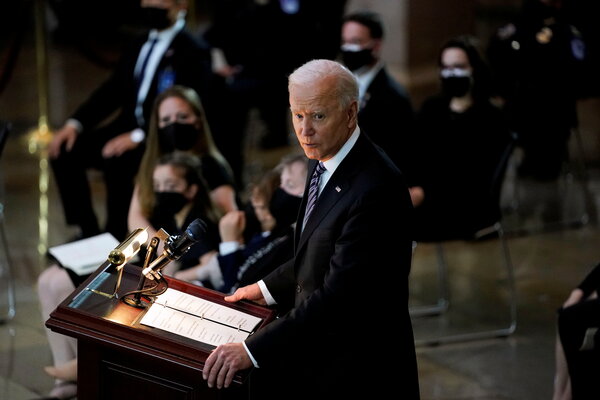 There have been spasms of violence in the agency’s past. Puerto Rican nationalists shot five lawmakers in the Capitol in 1954. A gunman killed two officers inside an entrance to the building in 1998. The terrorists who plotted the Sept. 11, 2001, attacks targeted the building, too, but never made it there.

But for the most part, a job on the Capitol Police force had been a relatively low-risk post. And never has so much violence been visited on so much of the department in such a short period of time, police and union leaders say.

One officer lost the tip of his right index finger during the Jan. 6 assault. Others were smashed in the head with baseball bats, flagpoles or pipes. Another lost consciousness after rioters used a metal barrier to push her into stairs as they tried to reach the Capitol steps.

Two officers, James Blassingame and Sidney Hemby, have sued former President Donald J. Trump for their injuries and suffering at the hands of the mob. Mr. Trump had spoken that day at a nearby rally, where he urged his supporters to “show strength” and “fight like hell.”

Officer Hemby has been in physical therapy two to three days a week for neck and back injuries, is suffering from poor sleep “and feels hyper-aware and on high alert during his waking hours,” the suit says.

Officers Blassingame and Hemby declined through their attorney to be interviewed.

The concerns of other rank-and-file officers, who are typically not authorized to talk to the news media, were described by union leaders, lawmakers who oversee the agency and lawyers working on cases related to the riot.

Officer Evans’s death came just as the Capitol was beginning to regain some sense of normalcy — adding grievous insult to injury.

Authorities have named Noah R. Green, 25, as the man who rammed his car into two officers outside the Capitol on April 2, killing Officer Evans. Family and friends said Mr. Green had struggled with mental illness in the weeks before the attack, but police have not publicly identified a motive. Police fatally shot him when he left his vehicle and charged officers with a knife.

The second officer, Ken Shaver, suffered injuries that were not life-threatening; on Tuesday, wearing a medical boot, he lay a wreath beside Officer Evans’s coffin.

“These past few months have been devastating. Just as the scars of Jan. 6 had begun to heal, another wound was opened,” Senator Chuck Schumer, Democrat of New York and the majority leader, said on Tuesday. “I say to you now, our dear Capitol Police force that protects us: There is no shame in grief and sorrow and shock.”

In an interview, Mr. Papathanasiou said he was worried that the staggering casualties, what he called a leadership vacuum at the department and the continuing strain of the coronavirus pandemic could lead to a major hiring crisis.

By the union’s count, the agency is already 233 people short of what Congress has authorized, and could see up to 500 officers depart in the coming years as they become eligible to retire. That could create an enormous deficit just as Congress is expected to soon authorize the agency to expand its force by up to 800 new officers, a recommendation of a task force convened to address the security shortcomings exposed by the riot.

The task force found that officers clocked more than 700,000 hours of overtime in the last full fiscal year and that the agency was on pace to exceed its budgeted overtime hours again this year.

“They want to beef up our force, and we are already in the hole,” Mr. Papathanasiou said. “Couple that with what’s been going on with the two events, the morale is at an all-time low.”

A spokesman for the department said it had been providing 24-hour counseling for officers and their families, including specialists to work with military veterans, peer counselors from local police departments and the House and Senate chaplains. The department has also hired outside specialists to hold workshops on psychological trauma and stress.

After firing the Capitol Police chief after Jan. 6, lawmakers have tried to avoid blaming officers themselves for losing control in the face of an attack that sent the vice president and much of Congress fleeing. Plans to honor officers with a Congressional Gold Medal for their work have been bipartisan, as have policy discussions about what changes to mandate to the force.

There was no mention of those changes, though, only grief, as dozens of lawmakers and officers gathered to pay tribute to Officer Evans on Tuesday.

Mr. Schumer described how Officer Evans, who often stood guard outside the Senate, was known to tease lost tourists flocking to see the Capitol and goad them with “bad dad jokes” before offering directions or a word of advice.

“Officer Evans wouldn’t leave the poor guy hanging,” Mr. Schumer said. “‘Now let me ask you a question,’ he’d say. ‘How can I help?’ Summing up his life’s mission in those four simple words.”

Officer Evans’s wife wiped away tears as she listened, sitting beside her young children, both clutching stuffed animals. When his daughter Abigail, 7, dropped a toy replica of the Capitol Dome she had been holding, Mr. Biden leapt up from his seat to return it to her. The president gave a challenge coin to Logan, 9, who watched the ceremony from under an oversize police cap.

Speaking directly to the children, Speaker Nancy Pelosi said their father now lay where Abraham Lincoln once had in death. He, too, she said, had been a “martyr for our democracy.”