Tens of thousands of people trying to flee remain in the country, unable to leave. 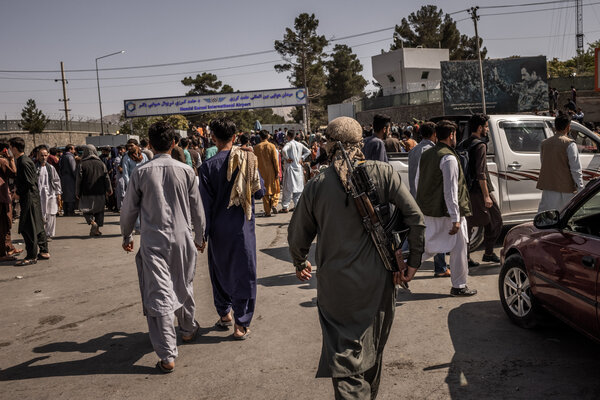 By Eric Schmitt and Helene Cooper

WASHINGTON — The Pentagon’s top two leaders said on Wednesday that the U.S. government is committed to evacuating all Americans who want to leave Afghanistan, as well as Afghans who helped the war effort and who are cleared to enter the United States.

Provided, that is, these people can get themselves past Taliban checkpoints to Hamid Karzai International Airport in Kabul, the Afghan capital.

“We intend to evacuate those who have been supporting us for years, and we are not going to leave them behind,” Gen. Mark A. Milley, the chairman of Joint Chiefs of Staff, told reporters. “And we will get out as many as possible.”

Speaking at a Pentagon news conference, both General Milley and Defense Secretary Lloyd J. Austin III stopped short of assuring safe passage to the tens of thousands of Afghan allies who have been blocked by the Taliban from reaching the airport. So far, American Marines and other troops have not been sent into Kabul to extract evacuees, the men said.

“The forces that we have are focused on security of the airfield,” said Mr. Austin, who added that the military would work with the Taliban to allow Afghans with proper paperwork to pass through. “I don’t have the capability to go out and extend operations currently into Kabul.”

General Milley said the State Department was in communication with the Taliban to ensure that passengers could make their way to the airport. But there have been numerous reports of Taliban fighters beating and harassing Afghans trying to get there, despite the Pentagon’s warnings not to interfere with the evacuation.

Neither Mr. Austin nor General Milley would commit to extending the operation, which has evacuated 5,000 people since it started over the weekend, beyond the Aug. 31 deadline the White House had set for ending the military’s mission in the country.