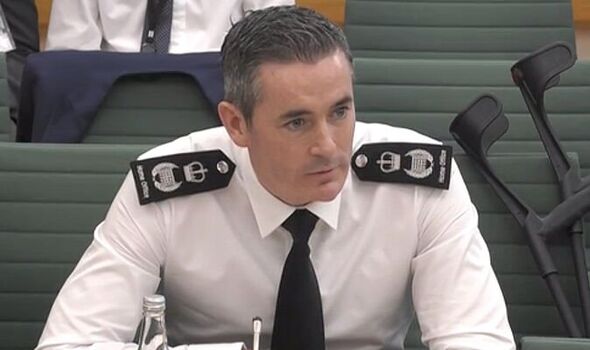 A record 38,000 migrants have made the dangerous crossing of the English Channel in 2022, with France blocking a smaller percentage of boats than last year.

Dan O’Mahoney, the Clandestine Channel Threat Commander tasked with tackling the problem, told MPs that so far this year 936 boats have made the treacherous journey.

He said France has stopped around 28,000 migrant crossings since the start of January, destroying 1,077 boats planning to travel to the UK.

Appearing before the Home Affairs select committee he added that the percentage of boats being intercepted by France was lower than last year “but a much much bigger number”.

He told MPs: “The percentages in terms of the people who have attempted to cross, 42 percent of them have been stopped from crossing.

“In terms of the boats that have been used, 53.4 percent of those have been intercepted and destroyed.”

He added: “Last year it was approximately 50 percent of people, and about the same for boats.”

The Home Office official said that the French legal system meant that many migrants intercepted were not arrested and processed but instead let free, allowing them to make multiple attempts to travel to Britain.

“The French legislation makes it very difficult for French officers to take any action in that way,” he said.

“I think it’s really important to mention the number of boats that have been intercepted and destroyed as well because that of course hits the organised criminal gangs in the pocket and makes it less profitable as well which is an important part of our response.”

The reduction in the percentage of boats being intercepted by French officials comes despite the UK handing over extra money to Emmanuel Macron’s Government to patrol beaches.

Over the past two years, the Home Office has paid France more than £80million to help prevent the crossings from taking place.

The money has been used to double the number of officials on patrol as well as to pay for aerial surveillance drones, dog detection teams, thermal imaging technology and radars.