In a desperate intervention, the Brussels diplomat vowed to “speed up” the wrangling over a free-trade agreement in the coming weeks. It comes after EU leaders scrapped plans for the Frenchman to “intensify” talks and instead ordered Boris Johnson to compromise. Mr Barnier told a news conference: “We’re available, we shall remain available until the last possible day.

“The negotiations aren’t over – we want to give these negotiations every chance to be successful. I shall say to David Frost we’re prepared to speed up negotiations in the next few days.”

The Frenchman said there is still a “real differences” on the main sticking points – fisheries, state subsidies controls and enforcement of the final agreement.

But he offered hope of an agreement in the coming weeks if Britain accepts his offer of accelerated talks.

Mr Barnier added: “I can’t say as we stand here that we would necessarily get a deal on the basis that. 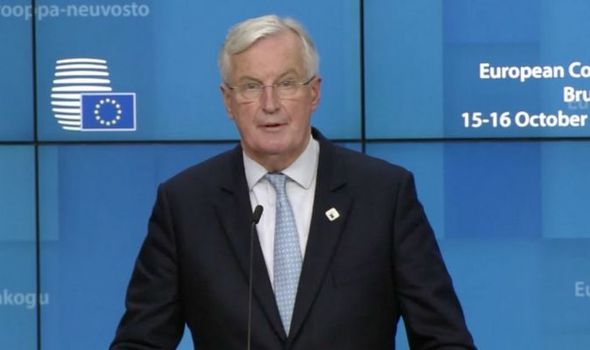 “We have got prospects of a deal, we need to make progress, in particular on the level playing field, governance and the fisheries dossier.”

Mr Johnson will tomorrow reveal whether he is prepared to walk away from the Brexit talks.

But Lord Frost, the Prime Minister’s Brexit envoy, said he was disappointed with the bloc’s recent announcement.