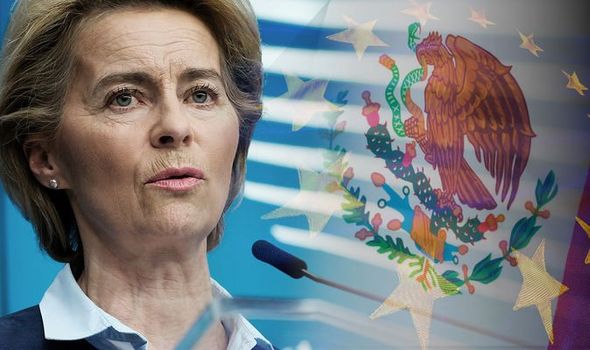 Politicians, scientists, environmentalist and campaigners say the deal struck between EU Trade Commissioner Phil Hogan and the Mexican Minister for Economic Affairs yesterday will trigger human rights abuses and crimes against the environment. A collective of so-called civil society European organisations which took part in the so-called Toxi Tour in Mexico demand the trade deal is scrapped. The group undertook a high-profile so-called Toxi Tour of Mexico just before Christmas touring some of the nation’s most polluted areas to raise awareness about environmental problems and denounce companies they blamed for causing them.

Latin-America news site Amerika21 said though the trade agreement was supposed to cover some areas of human rights and the environment it actually gave more power to big business to side-step government regulations.

They added the civic society group also felt all political energies in Mexico should be focused on fighting the coronavirus pandemic.

The paper wrote: “The updated trade agreement could lay the foundation for further human rights violations by European companies in Mexico.

“The new trade agreement between the European Union and Mexico should not be ratified or signed. In doing so, they are joining the global demand that the only commercial priority at the moment must be to remove obstacles to access to medical care and other resources, to strengthen public health systems and other social measures to deal with the current crisis.”

The free trade contract will also trigger the interest of Brexiteers as the contract is intended to enable duty-free trade of goods between the EU and Mexico and is part of the global agreement that entered into force in 2000. In addition to political cooperation, development cooperation and human rights are also covered.

Some commentators have pointed out this is largely what Britain is asking for in the Brexit deal.

The biggest complaint from the Toxi Tour critics is it would be the first trade agreement between the EU and a Latin American country to include investment protection clauses.

Amerika21 wrote: “This would strengthen the ability of transnational corporations to assert themselves against governments in both Europe and Mexico.2

The Toxi tour through Mexican industrial areas in December 2019 showed the downside of the increase in the number of multinational companies based in Mexico due to free trade agreements.

The bus convoy started off in El Salto, where industrial pollution in the Santiago river has been blamed for the deaths of more than 1,000 people from cancer and kidney failure.

More than 30 passengers included activists from Mexico, Argentina, Peru, the EU and the USA, but also scientists, a US senator, two EU parliamentarians and a representative of the Basque parliament.

At the time Mexico News Daily newspaper wrote: “At least three million people in those locations suffer health problems due to water, air and soil pollution, according to experts travelling with the caravan.

“The Toxi-Tour will “denounce United States, Canadian, German, French, Spanish and Mexican companies” that cause environmental damage, said Andrés Barreda, a representative of the National Assembly of Environmental Victims, which organized the caravan.”