The Work and Pensions select committee has agreed to launch its own investigation after campaigners brought evidence that conditions caused by asbestos are the biggest health and safety risk in the UK. It comes as the campaign group Airtight on Asbestos which is working with the ResPublica thinktank has produced a map of “cancer-causing” UK schools. Shockingly, the main areas are in the former Labour red wall heartlands which have recently been won over by the Conservatives.

The main problem is in so-called CLASP schools cheaply built out of lightweight materials in the late 1950s, 1960s and 1970s when they fell out of favour.

However, a central feature of the design – the steel-clad columns, which in nearly all cases contained ‘amosite’, one of the most dangerous types of asbestos.

When disturbed, the substance can release fibres that become airborne, and if inhaled, can damage the lung tissue, leading to mesothelioma, an incurable cancer responsible for over 2500 deaths every year.

Former minister Stephen Timms, who chairs the work and pensions committee, confirmed to the Sunday Express that they are planning to launch a full inquiry following a series of correspondence with employment minister Mims Davies.

He said: “Despite a ban on its use dating back over 20 years, asbestos is still devastating lives, with more than 5,000 related deaths a year. Worryingly, fatalities from related illnesses are increasing among jobs such as nurses and teachers.

“Questions are being raised about how asbestos is dealt with in the UK, particularly compared with some other countries such as France. The Health and Safety Executive (HSE) is rightly looking into how asbestos can be managed more safely. 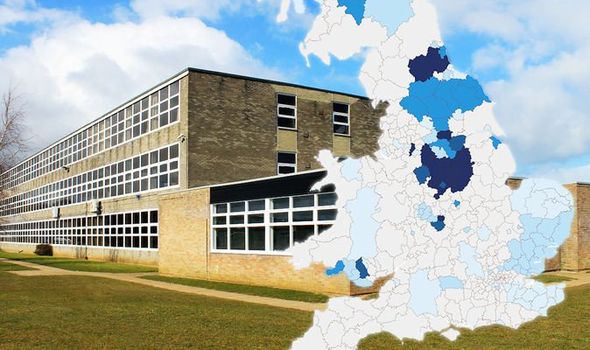 “The committee will look at this later in the year, to help make sure regulations are as effective and safe as possible.”

At least two-thirds of all CLASP structures are concentrated in the North of England and the East Midlands.

The county councils with the highest numbers are Nottinghamshire, Derbyshire and Durham.

The campaign describes the situation as a further example of the regional inequalities afflicting the UK, believing the government’s ambition to ‘level up’ must prioritise their urgent replacement.

Gateshead for example, has over 3 times as many schools with CLASP structures as London, despite only having a population of 200,000.

The North West is another regional ‘hotspot’ according to the data, and has seen several incidents highlighting the fatal consequences of asbestos exposure. 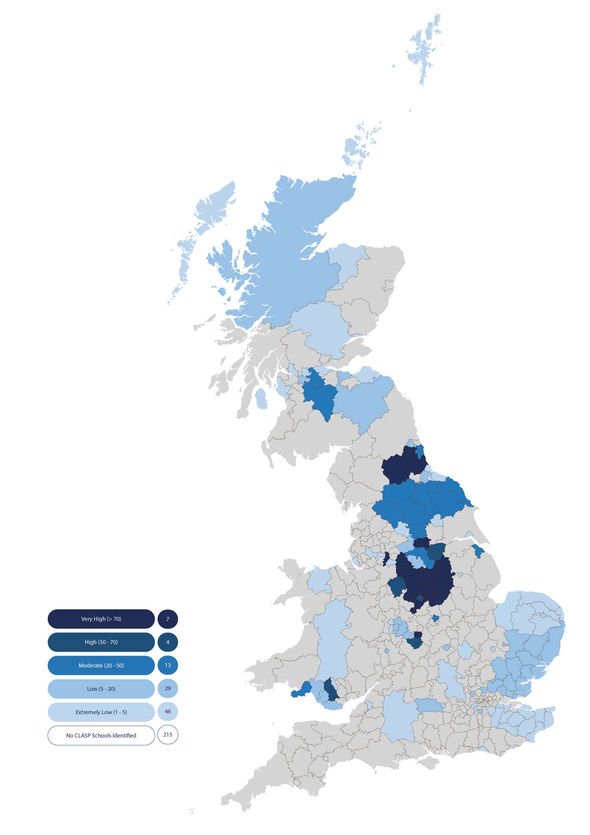 It has been established that 305 teachers of other education employees died of asbestos related conditions between 2001 and 2016.

The campaign has highlighted the case of Bernard Dawson who died in 2015 of mesothelioma after spending more than half a century teaching maths and science at secondary schools in Greater Manchester and Lancashire.

The father-of-five was diagnosed following his retirement in 1984. Similarly, Michelle Reed had worked as a French teacher at schools in the North West for her whole life, dying of mesothelioma in February 2017.

The campaign accused politicians and ministers of apathy over Britain’s number 1 occupational health killer with “only a handful of MPs” responding to letters of concern about CLASP schools in their constituencies.

A spokesperson for the campaign said – “The source of this apathy comes from the Health and Safety Executive, who’ve successfully persuaded Government and parliamentarians that the current regime is perfect.”