WASHINGTON — Acting Attorney General Monty Wilkinson asked the remaining Trump-era U.S. attorneys on a conference call on Tuesday to step down at the end of this month, according to a Justice Department official on the call, paving the way for the transition to new leadership under the Biden administration.

Though it was routine for new administrations, Mr. Wilkinson’s request that U.S. attorneys from the Trump administration leave over a period of weeks stood in contrast with former Attorney General Jeff Sessions’s demand without warning in 2017 that Obama-era officials tender their resignations immediately.

Mr. Wilkinson’s decision echoed transition processes of the Bush and Obama administrations, and it was in keeping with the Biden administration’s overall strategy of restoring executive branch norms.

U.S. attorneys, the top federal prosecutors in the Justice Department’s offices around the country, are typically political appointments made by presidents. When former President Donald J. Trump’s appointees leave office, their positions will be filled by acting officials, most often career prosecutors from those offices, until their replacements are confirmed, the department said in a statement on Tuesday.

“We are committed to ensuring a seamless transition,” Mr. Wilkinson said in the statement. “Until U.S. attorney nominees are confirmed, the interim and acting leaders in the U.S. attorneys’ offices will make sure that the department continues to accomplish its critical law enforcement mission, vigorously defend the rule of law and pursue the fair and impartial administration of justice for all.”

The Justice Department said that about one-third of the nation’s 94 U.S. attorneys’ offices were already being overseen by acting or interim leaders, and that President Biden would announce his nominees later.

Their confirmations will follow that of Judge Merrick B. Garland, Mr. Biden’s nominee for attorney general, whose confirmation hearing is not expected to begin until Feb. 22, according to a person briefed on the matter. 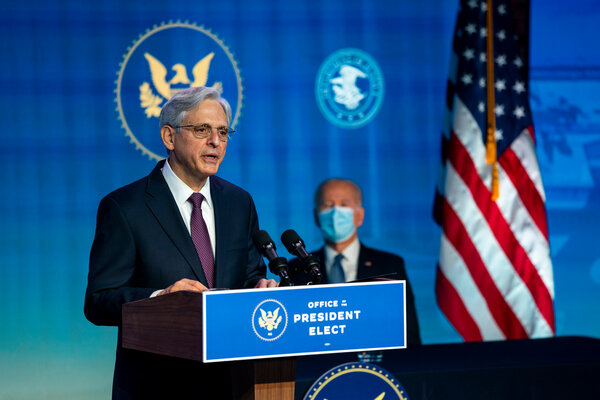 The confirmation process for Justice Department officials was slowed by an unusually fraught transition of power and by Mr. Trump’s second impeachment trial, which began on Tuesday.

This week, Mr. Wilkinson also addressed questions about who will lead investigations that pose political challenges for the Biden administration and its hope to restore the Justice Department’s image of impartiality.

He allowed John H. Durham, who will tender his resignation as the U.S. attorney in Connecticut, to remain at the department as the special counsel tapped to investigate the origins of the Trump-Russia inquiry, according to a senior Justice Department official.