From the beginning, the president has turned mask wearing and other preventive measures into a loyalty test. He and his aides have taken the same approach inside the White House. 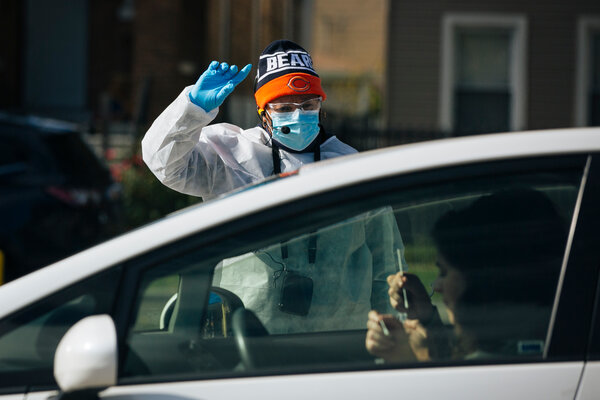 But just seven hours later, the White House made its own Covid headlines when officials acknowledged that another coronavirus outbreak had struck the White House, infecting Vice President Mike Pence’s chief of staff and four other top aides — and raising new questions about the Trump administration’s cavalier approach to the worst health crisis in a century.

“We’re not going to control the pandemic,” Mark Meadows, the White House chief of staff, said on CNN’s “State of the Union” on Sunday morning, essentially offering a verbal shrug in response to any effort to prevent an outbreak in the top echelon of the nation’s leaders. “We are going to control the fact that we get vaccines, therapeutics and other mitigations, because it is a contagious virus — just like the flu.”

Mr. Trump made no reference to the new cases during campaign rallies in New Hampshire and Maine on Sunday. But for voters, the new wave of infections at the White House just over a week before Election Day was a visceral reminder of the president’s dismissive and erratic handling of the virus, even in one of the most secure spaces in the country. And it comes just as the United States suffers its third surge in infections across the nation, with a record number of daily new cases on Friday and a death toll that has risen to almost 225,000.

Joseph R. Biden Jr., the Democratic presidential nominee, said Sunday that the statement by Mr. Meadows was “an acknowledgment of what President Trump’s strategy has clearly been from the beginning of this crisis: to wave the white flag of defeat and hope that by ignoring it, the virus would simply go away. It hasn’t, and it won’t.”

“It’s sadly no surprise then that this virus continues to rage unchecked across the country and even in the White House itself,” said the former vice president, who has sought to make the administration’s handling of the coronavirus the centerpiece of his campaign.

From the beginning, Mr. Trump has downplayed the threat of the virus, initially insisting that it would just “go away” and failing to ramp up testing that might have helped slow its spread. Mr. Trump clashed with his own scientists, pressuring officials at the Centers for Disease Control and Prevention to change their restrictive recommendations about how and when to reopen businesses and schools.

The president organized his pandemic response around his political ideology, warring with “blue state” governors while praising the hands-off approach of Republican leaders. And he publicly sided with people frustrated with restrictions and shutdowns, demanding on Twitter that the governor of Michigan, among others, “liberate” her state.

Mr. Trump turned mask wearing and other preventive measures into political loyalty tests, dismissing the critical importance of social distancing and pinning his hopes on Operation Warp Speed, a plan to accelerate development and distribution of a vaccine that has shown promise, but that scientists have insisted was never going to be quick or easy.

The president and his aides have taken the same approach inside the White House. They have declined to follow quarantine guidelines, ignored warnings from doctors, largely refused to wear masks and, in the case of the president, mocked reporters who did as recently as Friday in the Oval Office.