The return of a mask mandate on Capitol Hill has prompted a political fight in Congress, where Democrats from low-risk areas are complying while Republicans protest fiercely. 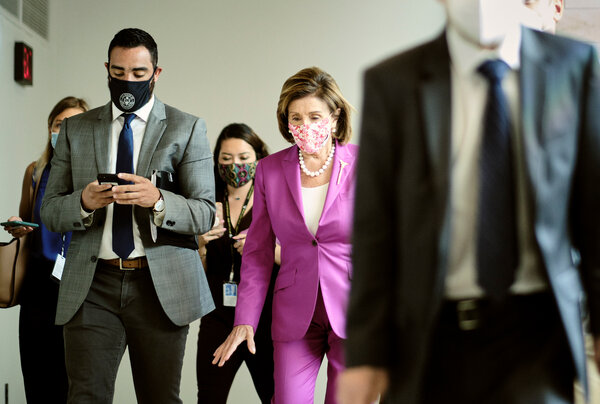 By Nicholas Fandos and Jonathan Weisman

WASHINGTON — Late Tuesday night, after the attending physician of the Capitol declared that the “People’s House” was once again under a mask mandate, the response from Republicans was immediate and emphatic.

“Make no mistake,” the minority leader, Kevin McCarthy, wrote, “The threat of bringing masks back is not a decision based on science, but a decision conjured up by liberal government officials who want to continue to live in a perpetual pandemic state.”

It was not clear what “liberal government officials” would get out of forcing Americans back into masks. Few relish donning their face coverings again. But the House mandate appeared to be playing out as a parable for the rest of the nation.

Lawmakers from districts with low rates of infection and high rates of vaccination — many of them Democrats — are compliantly wearing their masks, while members of Congress from areas where the virus is spreading rapidly — including many Republicans — have resisted, or are wearing their masks under protest.

In something of a twist, Republicans have co-opted a Democratic phrase and are insisting that they are the ones following the science, though the Centers for Disease Control and Prevention says its latest mask recommendations reflect the resurgent coronavirus, driven by a new, highly contagious variant ripping through unvaccinated populations.

It has not started well. Asked about Mr. McCarthy’s comments on Wednesday, Ms. Pelosi was overheard retorting, “He’s such a moron.” Ms. Pelosi’s spokesman later said he could not verify her precise words, but clarified that she indeed felt that Mr. McCarthy’s position “is moronic.” (She later softened her tone, saying the top Republican’s position was “not wise.”)

“If she’s so brilliant,” Mr. McCarthy shot back, “can she tell me where the science in the building changes between the House and the Senate?”

The Senate has not mandated masks, adopting voluntary recommendations instead.

For the C.D.C., the director, Dr. Rochelle P. Walensky, said on Wednesday, the tipping point for reinstating the mask guidance was new evidence that vaccinated Americans with “breakthrough” Covid-19 cases could infect others.

“Vaccinated people who are the breakthroughs have the same amount of virus as the unvaccinated people,” Dr. Walensky said on “Doctor Radio Reports,” a show on SiriusXM. “And that is very much leading us to believe that it is probably the case that those vaccinated breakthrough infections, rare as they might be, have the potential to infect others.”