WASHINGTON — He had been president for only two years, but that night in fall 1965 he had had enough. Lyndon B. Johnson had spiraled into depression, and from his hospital bed after gallbladder surgery, he talked of throwing it all away and retreating into seclusion back home in Texas.

To a visiting Supreme Court justice, he dictated thoughts for a statement announcing he was indefinitely turning over his duties to Vice President Hubert Humphrey while recovering from fatigue. “I want to go to the ranch. I don’t want even Hubert to be able to call me,” he told his wife, Lady Bird Johnson. “They may demand that I resign. They may even want to impeach me.”

Eventually, Mrs. Johnson coaxed him through that period of doubt and despair, enabling him to complete the final three years of his term. The episode was hidden from the public, and although Mrs. Johnson documented it in her diary, she ordered the entry kept secret for years after her death. But a new book reveals the full scope of those once-shrouded diaries as never before, shedding fresh light on the former first lady and her partnership with the 36th president.

The diaries reveal how central Mrs. Johnson was to her husband’s presidency. She not only provided a spouse’s emotional ballast but also served as an unrivaled counselor who helped persuade him to stay in office at critical junctures, advised him on how to use the office to achieve their mutual goals, guided him during the most arduous moments and helped chart his decision to give up power years later.

While she is remembered largely as a political wife and businesswoman with impeccable manners, an easy laugh, a soft Texas lilt and a quintessentially first-lady-like White House portfolio promoting “beautification” efforts, the diaries make clear that Mrs. Johnson behind the scenes was also a canny political operator and shrewd judge of people.

“The pre-existing image is one of two-dimensionality and stiff-upper-lipness and not a hair out of place,” said Julia Sweig, who spent five years researching the diaries for the biography “Lady Bird Johnson: Hiding in Plain Sight,” set to be published on Tuesday. “But when you get into this material, you see what a rounded, multidimensional human being she is.”

Mrs. Johnson began her diary shortly after the assassination of John F. Kennedy vaulted her husband to the presidency in November 1963, and she dutifully kept it up through the end of their time in the White House in January 1969. She released carefully edited excerpts in a 1970 book titled “A White House Diary,” but some portions remained sealed until long after her death in 2007 at age 94.

Ms. Sweig, a longtime Washington scholar, learned about the diaries from a friend and became captivated when she visited the Johnson presidential museum in Austin, Texas, and stepped into an exhibit that featured Mrs. Johnson’s voice from the taped diaries describing the day of the Kennedy assassination. The first lady’s voice was activated by a motion detector, so Ms. Sweig repeatedly stepped in and out of the museum room to hear the diary entry over and over.

She then embarked on a project examining all 123 hours of tapes and transcripts, the last of which were not released until 2017, combined with other research to produce the biography and an accompanying eight-part podcast, “In Plain Sight: Lady Bird Johnson,” produced by ABC News, that features Mrs. Johnson’s voice narrating her time in the White House. (The fourth episode airs on Monday.) 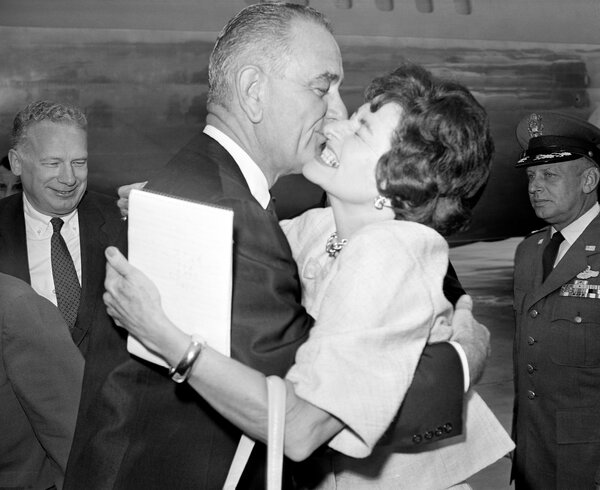 Johnson scholars said Ms. Sweig’s examination of the diaries flesh out the popular understanding of that era. “She fills out this picture now that we have of the Johnson presidency,” said the historian Robert Dallek, who spent 14 years researching two books on Lyndon Johnson.

Born Claudia Alta Taylor in a small East Texas town, Mrs. Johnson was a force in her husband’s political career from Congress to the White House. She advised him through the civil rights movement, the enactment of the Great Society program and the Vietnam War, and she helped figure out how to handle the arrest of a close aide and used her beautification program to promote an environmental and social justice agenda.

Perhaps most consequentially, she steered her husband through his inner turmoil. As early as May 1964, six months after taking office, he contemplated his departure by not running for election in his own right that fall. Mrs. Johnson drew up a seven-page strategy memo as well as a draft letter forgoing election to show him what it would look like. But she told her diary, “I hope he won’t use it,” and encouraged him to stay the course, which he did.

At the same time, her strategy memo presciently outlined his eventual course, suggesting he run for election but serve just one full term, then announce in March 1968 that he would not run again.

There were moments when he almost upended the plan, as in October 1965, after his gallbladder surgery. There was no particular precipitating event, and he was arguably at the height of his presidency, having passed major civil rights legislation while not yet mired in the worst of the Vietnam War. Indeed, he signed 13 domestic policy bills from his bed during a two-week convalescence at Bethesda Naval Hospital.

Yet for whatever reason, he became overwhelmed with the stress of the job one night as Abe Fortas, the longtime ally he had just appointed to the Supreme Court, sat at his bedside. The beleaguered president told his wife and the justice that he could handle “not one more piece of paper, not one more problem,” and he dictated thoughts about how he could escape the burdens of the presidency to Fortas, who wrote them out longhand.

“He was like a man on whom an avalanche had suddenly fallen,” Mrs. Johnson recorded. She knew his drastic mood swings better than anyone but had missed this one coming. “So here is the black beast of depression back in our lives,” she told her diary in a section she marked “close for 10 years, and review then.”

The diary entry reinforced how important she was to keeping her husband centered. “L.B.J. often let his demons roam with her, knowing that she would quietly ward them off by appealing to his better angels,” said Mark K. Updegrove, the president of the Lyndon B. Johnson Foundation and the author of “Indomitable Will” about the Johnson presidency. “He used her not only as a sounding board but revealed his subconscious to her, including expressing his darkest thoughts that he was trying to work through. She helped to work them out — or exorcise them.”

Mrs. Johnson helped exorcise them that fall, but by 1968, she, too, thought it might be time for him to move on. He had a secret ending drafted for his State of the Union address in January announcing that he would not run for re-election, but he was uncertain whether he would deliver it. Before he left for the Capitol, Mrs. Johnson noticed that he had left the secret draft behind, so she rushed over to tuck it in his suit pocket.

She then watched from the House gallery as he delivered his speech, not knowing herself whether he would use the secret ending or not. He did not. But then, when it came time for an address to the nation announcing a pause in bombing Vietnam, he finally issued the surprise declaration. That was in March 1968 — exactly according to the timetable Mrs. Johnson had outlined four years earlier.