Dominic Raab grilled over plans for increase in nuclear warheads

The Prime Minister criticised the aims of the Scottish National Party as he outlined the Government’s Integrated Review on the future of Britain’s security, defence, development and foreign policy in the Commons. The strategy on Britain’s role on the world stage was “the most comprehensive since the Cold War” according to Mr Johnson and was published in a 100-page document following a year-long review.

Defining the importance of the UK sticking together, he told MPs: “The greater our unity at home, the stronger our influence abroad, which will, in turn, open up new markets and create jobs in every corner of the UK, not only maximising opportunities for the British people but also, I hope, inspiring a sense of pride that their country is willing to follow in its finest traditions and stand up for what is right.

“With the extra investment and new capabilities of the Integrated Review, I believe the United Kingdom can thrive in an ever more competitive world, and fulfil our historic mission as a force for good.”

Confronting criticism of the plan from the SNP’s Westminster leader, he added: “This Government continues to invest massively in projects that will bring benefit to the whole of the UK, including to Scotland, and I can tell Mr Blackford there will be further investments in Lossiemouth, that there is no threat for instance to the Black Watch which I know that he and his colleagues sometimes like to raise in order to alarm people.

“We will continue to invest massively in overseas development aid which Mr Blackford rightly mentions and we’re very proud of what we’re doing, and by the way that delivers 500 jobs in East Kilbride. 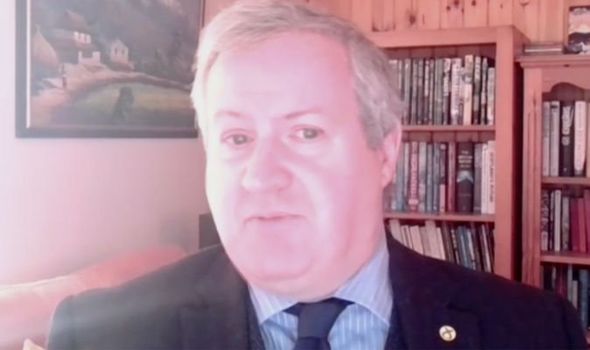 “We’ll continue to invest in shipbuilding, which drives jobs across the whole of the UK and particularly in Scotland, and I think it’s a fantastic thing to see those ships being built by apprentices in Govan as he has I’m sure.

“The only thing that endangers those investments and working together as one UK, working with all the fantastic people in the armed services in Scotland, is the reckless referendum which I think his party insists on calling in the most inapposite time possible for this country.”