PHOENIX — Democrats thought it would be enough.

After four years of draconian Trump immigration policies and divisive messaging, the Biden campaign courted Latino voters primarily by reminding them that Joseph R. Biden Jr. was not Donald Trump, that if they felt targeted in President Trump’s America, a vote for Mr. Biden would change that.

That argument resonated for many Latinos, who became the second-largest voting group for the first time this year.

“He’s come after people like me,” said Taylor Valencia, 23, a first-year elementary schoolteacher who showed up before sunrise on Tuesday to vote in person in Guadalupe, a predominantly Latino town near Phoenix. “His entire presidency is an attack on my moral values and who I am.”

But for others, it was Mr. Trump who made them feel a part of America, not targeted by it.

“I have been in this country since I was 9, I have been through a lot, and I am American,” said Teresita Miglio, an accountant in her 60s who immigrated from Cuba and attends an evangelical church in Miami where Mr. Trump spoke in January. “Abortion is the litmus test, Jesus is my savior and Trump is my president.”

Mr. Biden is now the president-elect, and as he vows to work “as hard for those who didn’t vote for me as those who did,” as he said in his victory speech on Saturday, he must grapple with the fact that Mr. Trump actually improved his showing among Latino voters, from under 30 percent in 2016 to closer to one-third this year, according to exit polls and voter surveys.

Democrats lost in Florida, in part because of lackluster support among Latino voters. They did basically no better than they normally do in Texas, in part because Hispanic voters in the Rio Grande Valley moved decisively toward the G.O.P. But in Arizona, Barry Goldwater’s home state and a once-conservative stronghold where Mr. Biden has a slim lead, Democrats will claim both of the state’s Senate seats for the first time in decades, fueled by young, progressive Latino voters.

For years, many Democrats have presumed demography as destiny, believing that Latinos would come to vote for them with the same kind of consistency that Black voters do. A growing Latino population, they hoped, would transform the political landscape and give the party an edge in the Southwest.

That dream ran into reality in this election, in which the results confirmed what was evident from conversations with hundreds of Latino voters in dozens of settings from the early days of the Democratic primary until the long ballot-counting hours in Arizona over the last week: The Latino vote is deeply divided, and running as not-Trump was always going to be insufficient.

At a Trump rally in Rio Rancho, N.M., last fall, Martha Garcia was part of the largely Hispanic crowd — many members of which wore Make America Great Again hats — waiting hours in the blazing sun to hear the president speak. She said she agreed with his harsh language on immigration: “We need to take care of the people who are already here.”

In east Las Vegas and Los Angeles, young progressives distraught over the Super Tuesday losses by “Tío Bernie” — Senator Bernie Sanders — remained politically active for the first time. At a Spanish-speaking evangelical megachurch in Miami, the pastor offered the president a blessing for re-election campaign early this year. And in South Phoenix on the eve of the election, grandfathers gathered last weekend for “Low Ridin’ With Biden,” showing off their custom Impalas. 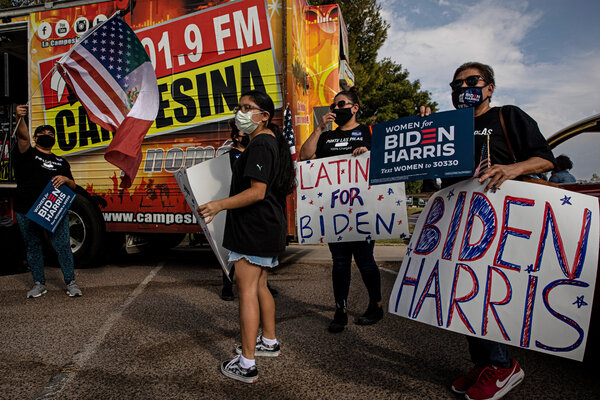 For Latinos, this was an election that turned on feelings about Mr. Trump above all else.

That just didn’t mean what Democrats, and the Biden campaign specifically, assumed it did.

“We went in the wrong direction, and we want to make sure that does not happen again,” said Julián Castro, the only Latino candidate in the 2020 Democratic presidential primary.

For months, he said, he had been publicly warning of the coming risks for Democrats from underinvesting in Latino voters, particularly in Texas. He said he was worried that even with a Biden victory, the party would find itself “winning the battle but losing the war.”

On Saturday, Representative Alexandria Ocasio-Cortez, a New York Democrat and one of the most prominent Latina members of Congress, spoke critically of her party’s efforts at connecting with Latino voters. “I don’t think that our party has ever seriously done the work,” she said, describing what she saw as concern only around election years. “That’s not acceptable for any community. I don’t know why it’s acceptable for so many communities of color.”

Both candidates in 2020 knew that Latino voters had the power to be decisive, and both campaigns went after them, at times with little sophistication. After the Democratic primary began with several candidates speaking Spanish on debate stages, the general-election approach — or as some critics call it, “Hispandering” — took a musical turn. Mr. Biden played the hit song “Despacito” on his cellphone speaker, and the Trump campaign commissioned a salsa music video played over Mexican folklórico dancers.

Fellow Democrats complained about the Biden campaign’s sluggish Latino outreach for months, though the campaign eventually spent a record $20 million on Spanish-language television and radio advertising, more than double the Trump campaign’s $9 million, according to Advertising Analytics, an ad tracking firm. And both campaigns tried to target voters based on regional and national origin — there were advertisements featuring Cuban, Puerto Rican and Mexican accents.

Indeed, the regional differences illustrate both political shifts and the way Latinos see themselves. In Arizona, for example, a historically Republican state shifted because of young Latinos who were politically activated by Senate Bill 1070, a 2010 state measure that was known as the “show me your papers” law and that critics called legalized racial profiling.

“People pretty much tend to attack us,” Alma Aguilar said at a small Black Lives Matter demonstration in the Phoenix suburbs this summer. “We are not treated the same way as white people.”

Even as votes were still being counted, many Democrats credited young Latinas such as Ms. Aguilar for their success in the state. Local activists noted that while the Democrats celebrated, organizing voters began long before the national party invested in the state.

“We did this,” said Alejandra Gomez, the co-executive director of Lucha, a voter engagement group that was established in response to anti-immigration state policies a decade ago. “We organized when nobody else was paying attention. It’s weird to say, but without that, I am not sure we would have flipped the state.”

Yet one lesson of Arizona — that political identity is often built in the face of persecution — did not bear out in Texas, where over a year ago a gunman killed 22 people in El Paso, the largest anti-Latino attack in modern American history, after the authorities said he wrote a manifesto that echoed much of the president’s language.

Texas didn’t even come close to flipping to the Democrats this year. Roughly 25 to 30 percent of Latino voters nationally have chosen Republican candidates for decades, but many Democrats said they were particularly alarmed by the loss of support in the Rio Grande Valley, where Mr. Biden won some border counties by significantly smaller margins than Hillary Clinton did in 2016.

“More people are waking up,” said Kelly Gonzalez, who attended a Republican election party in Harlingen, in South Texas, with her husband, her 1-year-old daughter and her 7-year-old son, each of them clad in Trump gear from head to toe. In the once reliably left-leaning region, Ms. Gonzalez said her opinion of liberals — particularly young ones — had changed in the last four years. “It’s like, ‘Give me this, give me that,’ and they don’t want to work for it,” she said.

Minerva Simpson, a district leader for the Texas Federation for Republican Women, who was one of the hosts of the party, said the president was critical to the energy she saw.

“We’ve seen the Latinos come out in a very strong way,” she said. “I’ve never seen a movement like that in my culture, and it’s all for Trump.”

Democrats also did not seem to account for how effective Mr. Trump’s efforts to tie their party to socialism would be, especially among Venezuelan- and Cuban-American voters in Florida.

“If Biden gets elected, America will go down the rabbit hole of socialism into communism within the next year,” said Gilbert Fonticoba, an internet marketer, who stood with a group waving American and Trump flags in front of a polling place in the city of Hialeah outside Miami on Tuesday. He said he became unemployed after his social media accounts were disabled because of his views as a member of the Proud Boys, a far-right group, adding that his parents had fled Cuba.

Mr. Fonticoba blamed the country’s polarization in part on the news media. “Millennials are brainwashed,” he said. “There’s a lot of dumb people that live in this country that believe the fake news.” Then, unprompted, he brought up the Proud Boys, denying that they had ties to white supremacy. “Proud Boys are for America, keeping America the way America was created,” he said. “The West is the best.”

The Biden campaign did recognize its potential weakness with Cubans and Venezuelans, but hoped that support from younger Latinos, particularly Puerto Ricans, might make up the difference. To make its case in Florida and elsewhere, the campaign emphasized the reality that Latinos were contracting and dying from the coronavirus and suffering economically at disproportionately high rates, and that the president had mishandled the pandemic. One of the final ads the campaign ran in battleground states, including Florida, Arizona and Nevada, focused on the Trump administration’s family separation policy.

But the fact that Mr. Biden is heading to the White House is not cause for a victory lap when it comes to engaging Latino voters, according to those who work on that issue.

“We were not choosing our savior, we were choosing our opponent,” said Marisa Franco, the executive director of Mijente, a Latino civil rights organization that originally backed Mr. Sanders, explaining her group’s work in 2020. “The Biden campaign may have chosen not to spend time in working-class, immigrant and people-of-color neighborhoods, but that is exactly where his victory is coming from and where the solutions he’ll need to champion will have to start.”

Most Latino groups have not expressed surprise at the election’s results. They have long noted, for example, how little conservative religious South American voters in Florida backing Mr. Trump have in common with progressive young Mexican-Americans in Arizona turning out for Democrats. But the groups’ leaders also argue that without pushing the idea of a pan-Latino political identity, Latinos in any one region might never get sustained attention from national candidates.

In September, a nonpartisan group called the Texas Organizing Project released a report based on interviews with more than 100 Latinos in Texas that offered a preview of how 2020 might go.

“The majority do not feel there is a singular ‘Latino Vote,’ the report concluded. “Though they see its potential.”