WASHINGTON — House Democrats introduced an article of impeachment against President Trump on Monday for his role in inflaming a mob that attacked the Capitol, scheduling a Wednesday vote to charge the president with “inciting violence against the government of the United States” if Vice President Mike Pence refused to strip him of power first.

As the impeachment drive proceeded, federal law enforcement authorities accelerated efforts to fortify the Capitol ahead of President-elect Joseph R. Biden Jr.’s inauguration on Jan. 20. The authorities announced plans to deploy up to 15,000 National Guard troops and set up a multilayered buffer zone with checkpoints around the building by Wednesday, just as lawmakers are to debate and vote on impeaching Mr. Trump.

Federal authorities also said they were bracing for a wave of armed protests in all 50 state capitals and Washington in the days leading up to the inauguration.

“I’m not afraid of taking the oath outside,” Mr. Biden said Monday, referring to a swearing-in scheduled to take place on a platform on the west side of the Capitol, in the very spot where rioters marauded last week, beating police officers and vandalizing the building.

Mr. Biden signaled more clearly than before that he would not stand in the way of the impeachment proceeding, telling reporters in Newark, Del., that his primary focus was trying to minimize the effect an all-consuming trial in the Senate might have on his first days in office.

He said he had consulted with lawmakers about the possibility they could “bifurcate” the proceedings in the Senate, such that half of each day would be spent on the trial and half on the confirmation of his cabinet and other nominees.

In the House, a vote was scheduled for Tuesday evening to first formally call on Mr. Pence to invoke the 25th Amendment. Republicans had objected on Monday to unanimously passing the resolution, which asked the vice president to declare “president Donald J. Trump incapable of executing the duties of his office and to immediately exercise powers as acting president.”

The House is slated to begin debate on the impeachment resolution on Wednesday morning, marching toward a vote late in the day unless Mr. Pence intervenes beforehand.

“The president’s threat to America is urgent, and so too will be our action,” Speaker Nancy Pelosi of California said, outlining a timetable that will most likely leave Mr. Trump impeached one week to the day after he encouraged his supporters to march to the Capitol as lawmakers met to formalize Mr. Biden’s victory.

The vice president had already indicated that he was unlikely to act to force the president aside, and no one in either party expected Mr. Trump to step down. With that in mind, Democrats had already begun preparing a lengthier impeachment report documenting the president’s actions and the destruction that followed to accompany their charge.

They were confident they had the votes to make Mr. Trump the first president ever to be impeached twice.

The impeachment article invoked the 14th Amendment, the post-Civil War-era addition to the Constitution that prohibits anyone who “engaged in insurrection or rebellion” against the United States from holding future office. Lawmakers also cited specific language from Mr. Trump’s speech last Wednesday riling up the crowd, quoting him saying, “If you don’t fight like hell, you’re not going to have a country anymore.”

The Republican Party was fracturing over the coming debate, as some agreed with Democrats that Mr. Trump should be removed and many others were standing behind the president and his legions of loyal voters. They were also fighting among themselves, with many Republicans furious over what took place a week ago and blaming their own colleagues and leaders for having contributed to the combustible atmosphere that allowed a pro-Trump rally to morph into a deadly siege.

Unlike Mr. Trump’s first impeachment, in 2019, few Republicans were willing to muster a defense of Mr. Trump’s actions, and Representative Kevin McCarthy of California, the top House Republican, privately told his conference that the president deserved some blame for the violence, according to two people familiar with his remarks. Mr. McCarthy remained personally opposed to impeachment and tried to hold his conference together during a lengthy call on Monday afternoon.

But as many as a dozen Republicans were said to be considering joining Democrats to impeach, including Representative Liz Cheney of Wyoming, the No. 3 House Republican.

“It’s something we’re strongly considering at this point,” said Representative Peter Meijer, a freshman Republican from Michigan, told a Fox affiliate in his home state. “I think what we saw on Wednesday left the president unfit for office.”

Mr. Trump gave his party little direction or reason to rally around him. Ensconced at the White House and barred from Twitter, he offered no defense of himself or the armed assailants who overtook the Capitol, endangering the lives of congressional leaders, their staffs and his own vice president.

Chad F. Wolf, the acting secretary of homeland security, became the latest cabinet official to resign in the aftermath of the Capitol riot, stepping down just nine days before he was expected to help coordinate the security at the inauguration.

If Mr. Trump is impeached by the House, which now seems virtually certain, he would then face trial in the Senate, which requires all senators be in the chamber while the charges are being considered. Democrats had briefly considered trying to delay an impeachment trial until the spring, to buy Mr. Biden more time without the cloud of such a proceeding hanging over the start of his presidency, but by late Monday, most felt they could not justify such a swift impeachment and then justify a delay.

Still, the timing of a trial remained unclear because the Senate was not currently in session. Senator Chuck Schumer of New York, the top Democrat, was considering trying to use emergency procedures to force the chamber back before Jan. 20, a senior Democratic aide said, but doing so would take the consent of his Republican counterpart, Senator Mitch McConnell of Kentucky.

House leaders said the timing and outcome of any Senate trial was secondary to their sense of urgency to charge Mr. Trump with crimes against the country.

“Whether impeachment can pass the United States Senate is not the issue,” Representative Steny H. Hoyer of Maryland, the majority leader, told reporters. “The issue is, we have a president who most of us believe participated in encouraging an insurrection and attack on this building, and on democracy and trying to subvert the counting of the presidential ballot.”

Other accountability efforts were underway in the shadow of the drive to punish Mr. Trump. Law enforcement fanned out across the country to track down and arrest members of the mob and heavily fortified the Capitol, where National Guard troops clad in camouflage uniforms roamed the ornate corridors and patrolled the sidewalks outside.

Representative Tim Ryan of Ohio said the Capitol Police were investigating roughly a dozen of their own officers and had suspended two for potentially aiding the insurrectionists. One took selfies with those laying waste to the Capitol; another donned a “Make America Great Again” cap and potentially gave them directions, Mr. Ryan said.

“Any incidents of Capitol Police facilitating or being part of what happened, we need to know that,” he said.

Progressive lawmakers called for investigations and possible expulsions of Republicans who had supported Mr. Trump’s attempt to overturn the election and helped stoke the violence. More moderate Democrats discussed plans to try to ostracize them going forward — including by refusing to sign onto their legislative efforts or routine requests — because they were likely to remain in Congress. Republicans stoking the bogus claims of election theft themselves were mostly unapologetic and insisted their actions had nothing to do with the violence done in Mr. Trump’s name. 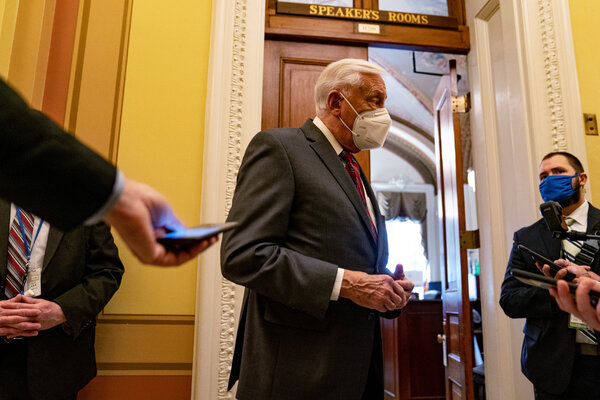 The four-page impeachment article charges Mr. Trump with “inciting violence against the government of the United States” when he sowed false claims about election fraud and encouraged his supporters at a rally outside the White House to take extraordinary measures to stop the counting of electoral votes underway at the Capitol. A short time later, rioters mobbed the building, ransacking the seat of American government and killing a Capitol Police officer. (At least four others died as a result of injuries or medical emergencies on Capitol grounds.)

“In all this, President Trump gravely endangered the security of the United States and its institutions of government,” the article read. “He threatened the integrity of the democratic system, interfered with the peaceful transition of power, and imperiled a coequal branch of government. He thereby betrayed his trust as president, to the manifest injury of the people of the United States.”

Modern presidential impeachments have been drawn-out affairs, allowing lawmakers to collect evidence, hone arguments and hear the president’s defense over the course of months. When the Democratic-led House impeached Mr. Trump the first time, it took nearly three months, conducting dozens of witness interviews, compiling hundreds of pages of documents and producing a detailed case in a written report running 300 pages.

It appeared this time that the House planned to do so in less than a week, with little more evidence than the fast accumulating public record of cellphone videos, photographs, police and journalistic accounts, and the words of Mr. Trump himself.

Mr. Trump’s most outspoken defenders opposed impeachment, though most did not explicitly defend his conduct. Many of them who just last week backed his drive to overturn Mr. Biden’s victory and voted to toss out legitimate results from key battleground states, argued that to impeach the president now would only further divide the country.

In a letter to colleagues, Mr. McCarthy wrote that impeachment would “have the opposite effect of bringing our country together when we need to get America back on a path towards unity and civility.” He tried to point Republicans toward possible alternatives, including censure, a bipartisan commission to investigate the attack, changing the law that governs the electoral counting process that rioters disrupted and electoral integrity legislation.

“Please know I share your anger and your pain,” he wrote. “Zip ties were found on staff desks in my office. Windows were smashed in. Property was stolen. Those images will never leave us — and I thank our men and women in law enforcement who continue to protect us and are working to bring the sick individuals who perpetrated these attacks to justice.”

Some moderate Democrats were growing uneasy about the implications of such fast and punitive action, fearful both of the consequences for Mr. Biden’s agenda during his first days in office and of further igniting violence across the country among Mr. Trump’s most extreme supporters. They tried to cobble together support for a bipartisan censure resolution instead, but it appeared it might be too late to stop the momentum in favor of impeachment.

Ms. Pelosi shut the idea down during her private call with Democrats, saying that censure “would be an abdication of our responsibility,” according to an official familiar with her remarks.