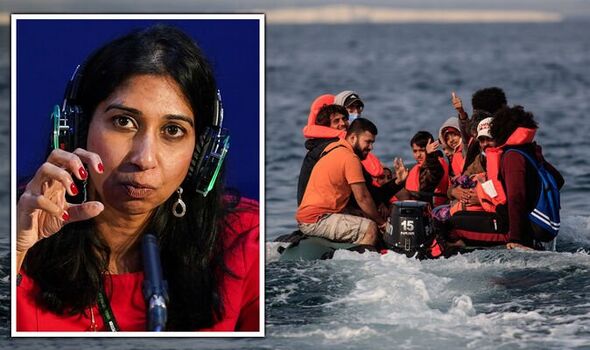 The Home Secretary warned the number of arrivals “must come down” as “mass and rapid migration” puts too much pressure on public services.

She warned that the Government will face months of battles with activists and campaigners over plans to deport Channel migrants to Rwanda.

Ms Braverman said that every Government victory would be appealed, and each appeal could take months to resolve.

And the new Home Secretary revealed her “ultimate aspiration” is to get net migration down into the tens of thousands, but she refused to set a target for the next election.

“I’m not going to commit to a number. I think we have got to definitely substantially reduce the number of students, the number of work visas and in particular the number of dependents on those sorts of visas.”

Ms Braverman said it was her “dream” to see a removal flight finally head to Rwanda after months of disruption. The Government has faced numerous legal challenges, and is awaiting a decision from the High Court on whether the flights can go ahead.

Expressing her determination to reduce the number migrants who successfully seek refuge in the UK, she said: “We need to get net migration down.”

“That is my unfiltered unvarnished, unapologetic view overall. Migration, net migration, however you want to call it needs to come down as 230,000 was a large number.”

“That is the same as pre-Brexit levels. There are structural pressures that mass and rapid migration has on housing supply, house prices, on the number of GP places, school places.”

“I think it is incumbent on Government to take a rational and pragmatic view on the numbers coming into this country.”

“I think poor universities are being bankrolled by foreign students and I would really like to see that number come down.”

The Home Secretary said of the Channel crossings: “It is a deeply entrenched and complex problem”.

She said that a photograph on a newspaper front page of a migrant plane going to Rwanda is her “dream”.

She said: “When will that happen? You have got to ask the courts that. By Christmas would be amazing.”

“The reality is, the French are stopping about 40 to 50 percent of embarkations from the coast. That’s not good enough, but it is better than nothing.”

“That interception rate should be 80/90 percent. They have got 200 Gendarmerie on the French beaches. We need to double that.”

“They want to solve this. It is ruining communities.”

The Home Secretary, who was previously the attorney general, said that efforts by Boris Johnson and Ms Patel were “thwarted by our laws” and hinted at changes to the Human Rights Act and modern slavery legislation.

She confirmed that the Bill of Rights drawn up by former justice secretary Dominic Raab had been shelved, but that elements concerning the impact of the European Court of Human Rights were being taken forward.

Asked if ministers would consider providing funding to other countries to deal with migrants, as the EU does with Turkey, Prime Minister Liz Truss said: “That is essentially what we are doing with Rwanda.”

She added: “I think that is an option and we will look at all options but certainly we need to deal with this problem upstream, we need to help people stay in their own country rather than taking what is a very perilous journey.”

Asked about setting a target for immigration, Ms Truss said: “I don’t want to see numbers going up, what I want to see is the right people coming in with the right skills that can contribute to Britain.”

Foreign Secretary James Cleverly said he had a “lovely chat” with the French President at the Queen’s funeral.

He said: “We had a very friendly chat, I said to him that the comments that he made about Her late Majesty were pitch perfect.”

The UK and France have a “degree of sibling rivalry” and “our proximity sometimes adds friction”, Mr Cleverly said.

“No doubt we’ll find ways to have blazing rows with France,” he said, because “that’s our thing”.

But, he added, “we have a real ability to pull together and work collaboratively”.