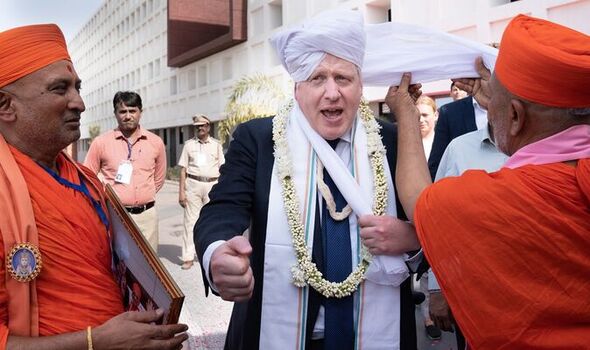 The Prime Minister insisted his Government “will do everything we can” to help hard-pressed families ahead of the autumn Budget. But he rejected calls from the Net Zero Scrutiny Group of Tory MPs for levies on energy bills to be dumped in response to price surges. The green levy – which adds £153 to the average energy bill – is used to fund renewable energy schemes, a key feature of the Government’s recently unveiled supply security strategy.

However, it has been a source of backbench ire during the escalating energy crisis. Some 20 Tory MPs and peers wrote to the PM demanding the scrapping of green taxes on energy bills earlier this year.

Chancellor Rishi Sunak has now provided households with up to £350 of annual savings on household energy bills through a £9billion rebate scheme. But he has maintained the green levies, which have continued under successive Tory prime ministers since David Cameron.

In remarks likely to enrage his Tory critics, the PM hit out at “prejudice” surrounding his green policies and insisted levies designed to encourage the use of renewable energy could save money.

Speaking during his trade visit to India, Mr Johnson said: “I want to do everything we can to alleviate the cost of living.

“But, actually, if you look, there’s a lot of prejudice against the green agenda.

“Overall, if you look at what we have done with renewables, it has helped to reduce bills over the last few years and will continue to do so.

“That’s why one of the things I want to do is use this moment to really drive towards more offshore wind turbines.

“This country used to be number one for offshore wind, then China overtook us. We need to regain our lead, we need to build them faster and we can do it.”

Asked if the Government could bring in new measures to help families cope with the cost of living, the PM ruled nothing out while highlighting the £22billion package of support already unveiled this year.

He said: “We’ll do whatever we can to help, but don’t forget what we’ve already done. So there’s the council tax abatement of £150 for everybody in bands A to D homes.

“We’ve cut taxes for most people by lifting the National Insurance threshold. That’s actually quite a big tax cut for loads of people.

“We’re continuing with all the support that we’ve got. We’ve cut fuel duty by the biggest amount ever, a 5p cut in fuel duty.

“Together, the package is worth £22billion. But the best answer is to have high wage, highskilled jobs, which is why we’re off to India, to get more investment into this country.”

Pressed on the possibility of more support, he said: “I’m saying we’ll do everything we can” to help, but I’m pointing to what we’ve already done. “

Tory MP Craig Tracey, a member of the Net Zero Scrutiny Group , said: “I’ve really welcomed the stance from Government that they will be doing all they can to help families with the cost of livingand that they are exploring all options.

“But that has surely got to include looking at how much our constituents are disproportionately burdened by the green levies that add a considerable amount to their energy bills.

“That doesn’t mean we need to jettison future ambitions to provide greener options.

“It just sends the clear message that Government do understand the issues people are facing here and now, and are prepared to act to help.

“While there are many parts of the current cost of living challenges which are out of Government control, this is certainly one lever that can be pulled which could have such a positive impact, helping our constituents.

“Particularly some of those most vulnerable to sudden price changes.”

The energy price cap, which spiked 54 percent this month to an eyewatering £1,971 per year, is likely to rise again in October.

Energy specialists Cornwall Insight predict a further 34 percent increase to £2,599 per year when the cap is updated in the autumn.

Office for Budget Responsibility (OBR) analysis of wholesale oil and gas prices suggests bills could increase by as much as 40 percent.

In either scenario, this would mean price-capped energy bills will have more than doubled in less than 12 months.

Bosses of the UK’s largest energy firms have warned that four in 10 people could fall into fuel poverty in October as wholesale prices rocket.

They have called for a “social tariff” to help protect the poorest customers.

As costs soar and wages fall, the OBR has warned living standards face their biggest drop in a single year since records began in the mid-1950s.

Inflation, now at a 30-year high, rocketed to seven percent during March with analysts expecting it to reach 8.7 percent later this year.

March’s inflation figure does not take into account the average 54 percent hike in energy bills that was applied to around 22 million households three weeks ago.