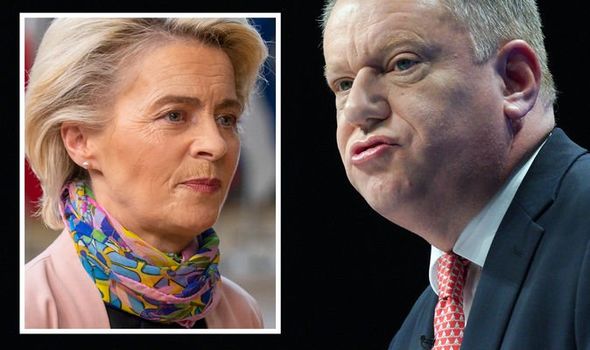 The minister warned the EU that the UK would not hesitate to take retaliate if Paris broke international law in a strop over fishing licences.

France has threatened to block British boats from some ports and tighten checks on those travelling between France and the UK if the Government does not issue more licences for European vessels to access UK waters.

It has given the UK until next Tuesday to meet their demands.

However, officials in London insist licences have been issued to all French boats who have provided the necessary paperwork to support an application.

They say the UK is granting access as laid out in the EU trade deal signed last December.

Both Britain and the EU first heard of Paris’s ultimatum through the media on Wednesday evening after the French government failed to formally notify their counterparts in London and Brussels of their threat in advance.

A UK Government spokesperson said: “Lord Frost set out to the Vice President our concerns about the unjustified measures announced by France earlier this week to disrupt UK fisheries and wider trade, to threaten energy supplies, and to block further cooperation between the UK and the EU, for example on the Horizon research programme.

“Lord Frost made clear that, if these actions were implemented as planned on 2 November, they would put the European Union in breach of the Trade and Cooperation Agreement (TCA).

“The Government is accordingly considering the possibility, in those circumstances, of launching dispute settlement proceedings under the TCA, and of other practical responses, including implementing rigorous enforcement processes and checks on EU fishing activity in UK territorial waters, within the terms of the TCA.”

Foreign Secretary Liz Truss has also summoned the French ambassador to the UK, Catherine Colonna, to be reprimanded this afternoon for the menacing comments coming from across the Channel.