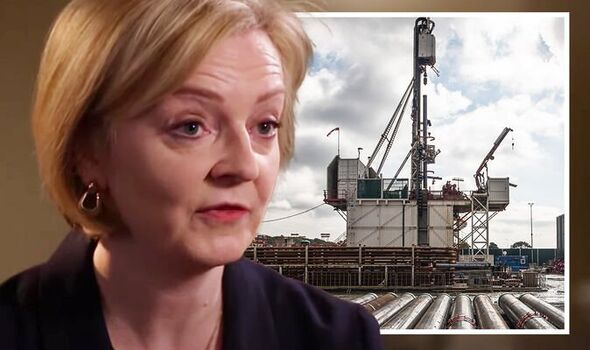 Speaking on Thursday, the prime minister said she would not rule out drilling in Lancashire, where the council is opposed, along with most members of parliament. In 2016 Lancashire County Council refused planning permission for fracking but was overruled by then Tory communities secretary Sajid Javid.

Cuadrilla’s site at Preston New Road is the only place in the UK where fracking has taken place. Drilling was stopped after a series of earthquakes.

Ms Truss said: “We will only press ahead with fracking in areas where there is local community support for that.

“Fracking is carried out perfectly safely in various parts of the world and the business secretary will make sure that any fracking that takes place is safe.

“We have to be very clear about why we are doing this. The UK has become dependent on global energy prices.

She continued: “The UK has become dependent on global energy prices. We have seen through Vladimir Putin’s appalling war in Ukraine how energy prices have shot up and Russia has used the fact that it produces gas as a way of exerting pressure on other countries.

“We simply don’t want to be in that position so what I want to see is more home-grown energy in the UK.

“That means using more resources in the north sea, more renewables and more nuclear and it also means fracking in areas where there is local support.”

In her interview it was put to Ms Truss was fracking in other countries such as the US took place “in the middle of nowhere” rather than in built-up areas.

Asked whether she knew where Preston New Road, the site of previous drilling was, she replied: “I don’t think I’ve been to that site in the past.”

BBC Radio Lancashire presenter Graham Liver asked “what local consent looks like” and said Fylde MP, Mark Menzies, asked her to outline how local consent will be given. Ms Truss did not have a clear explanation.

She said: “Well… the energy secretary will be laying out in more detail exactly what that looks like, but it does mean making sure there is local support to go ahead.”

Ms Truss replied: “There are variously detailed issued to be worked through. I can assure Mark Menzies I will make sure there is local consent if we are to go ahead in any particular area with fracking.”