Boris Johnson and Priti Patel have been branded “total hypocrites” over their condemnation of racist abuse of England players – as critics highlighted ministers’ equivocation over whether football fans should jeer the national side for taking the knee.

Following England’s defeat to Italy in the Euro 2020 final, police have launched an investigation into offensive and racist social media comments being directed towards Three Lions players.

Both the prime minister and the home secretary have since condemned the abuse of England’s players.

Yet critics have questioned a previous lack of support from Mr Johnson and Ms Patel over the England side’s decision to take a knee before matches to show their opposition to racism. 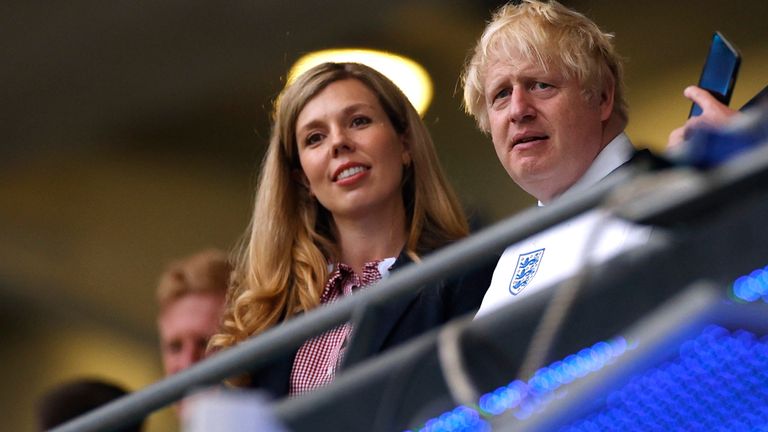 Last month, ahead of the Euro 2020 tournament, the prime minister told England fans not to boo footballers taking the knee.

But it came after he had previously failed to criticise supporters who jeered the protest against racial injustice.

Meanwhile, Ms Patel described taking the knee as “gesture politics” and said England fans had a “choice” over whether or not to boo players as they made their protest.

Speaking to Sky News on Monday, former England defender Gary Neville said that dealing with racism “starts at the very top” while he also highlighted some of the prime minister’s past comments.

“He said Muslim women look like letterboxes,” the Sky Sports pundit said. “Should we not be highlighting this more often?”

The ex-Manchester United player described Mr Johnson and England manager Gareth Southgate as “absolutely poles apart”, adding: “You can be a leader and a gentleman, you can be ruthless but have empathy and compassion.”

And, as well as politicians, he also called for more action from social media companies and football authorities over racism in the game.

“There is an issue obviously in football, there is an issue in society where we feel it’s acceptable, basically, to criticise players for sporting actions because of the colour of their skin,” he said.

“But, I have to say, accepting and validating that players who take the knee are promoting equality and inclusion and defending against racism, it’s coming from the very top.

“You know full well that if your parents do something, your children will follow.

“I’m not saying that each individual person who directed that abuse towards the players shouldn’t take accountability, they absolutely should.”

“The prime minister and the home secretary gave licence to the racists who booed the England players and are now racially abusing England players,” she posted on Twitter.

She also likened the pair to “arsonists complaining about a fire they poured petrol on”.

“I’m afraid the prime minister has failed the test of leadership,” he said.

“The prime minister failed to call that out and the actions and inactions of leaders have consequences.”

Former Conservative Party chair Baroness Warsi said the racist abuse of players after the Euro 2020 final “proved that taking the knee was an important and essential part of this tournament”.

She added: “Those that booed and failed to condemn the booing are feeding a culture where racism thrives and shames our nation.”

And, in a message to Ms Patel on Twitter, the Tory peer said: “If we ‘whistle’ and the ‘dog’ reacts we can’t be shocked if it barks and bites.

“It’s time to stop the culture wars that are feeding division.”

Meanwhile, a Conservative MP has apologised after suggesting England forward Marcus Rashford should have spent more time “perfecting his game” than “playing politics” after he missed a penalty in Sunday night’s shoot-out.

After Dover MP Natalie Elphicke made the comment in a message to fellow MPs, as reported by GB News, she said: “I applaud the England team who gave their all in Euro 2020.

“Last night I shared the frustration and heartbreak of millions of other England fans.

“I regret messaging privately a rash reaction about Marcus Rashford’s missed penalty and apologise to him for any suggestion that he is not fully focused on his football.

“Onwards to the World Cup and I look forward to Marcus Rashford’s contribution at that time.”

Rashford was awarded an MBE last year following his campaigning over child food poverty in the UK.