The senior MEP ordered a tough crackdown on the firm the firm for failing to fulfil its contract with the bloc. And he insisted Brussels should adopt a hardline position on exports abroad – warning that European factories have shipped more life-saving jabs to the UK than they have Spain. Mr Weber said: “We have sent nine million vaccines to the UK and they delivered zero.

“We sent more vaccines in the last three months to the UK than we have given Spain.”

The German added: “I would say that it is unthinkable that we, from now on, export any kind of doses from AstraZeneca to the rest of the world until the company is fulfil the contract, which they have with the European Union.”

Earlier eurocrats announced the beefed-up powers to prevent life-saving Covid immunisations from being sent abroad for at least six weeks in response to growing anger over the bloc’s jabs shambles. 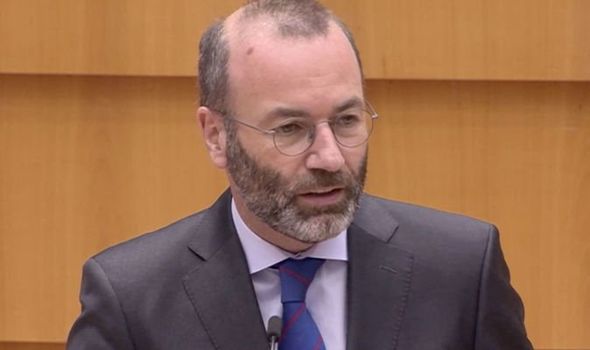 They will be able to use the draconian mechanism to block shipments to countries with higher vaccination rates and less infections than EU nations.

The German said: “We have to ensure timely and sufficient vaccine deliveries to EU citizens citizens. Every day counts.”

And her deputy Valdis Dombrovskis warned Britain was a potential target because our factories have not shipped any doses to the Continent.

The Commission vice-president suggested Brussels could retaliate by snatching doses of the Pfizer vaccine heading to our shores.

Mr Dombrovskis told a Brussels news conference: “The EU still faces a very serious epidemiological situation and continues to export significantly to countries whose situation is less serious than ours, or whose vaccination is more advanced than ours.”

“If we discuss reciprocity, solidarity and global responsibility, it’s clear we need to look at those aspects.”

And the top eurocrat insisted eurocrats would now review exports of the Pfizer vaccine to Britain from a plant in Belgium on a “case by case basis”.

Downing Street has called on Brussels to end its blockade on medical supplies and said it was willing to help the EU get its vaccination scheme back on track.

No10 insisted the bloc’s ultimatum would not impact the immunisation drive at home.

Responding to the threats, a Government spokesman said: “We are all fighting the same pandemic – vaccines are an international operation, they are produced by collaboration by great scientists around the world. And we will continue to work with our European partners to deliver the vaccine rollout.

“We remain confident in our supplies and are on track to offer first doses to all over 50s by April 15 and all adults by the end of July.

“Our plan to cautiously reopen society via our roadmap also remains unchanged.”

Angry insiders have accused the Anglo-Swedish drugs giant of using European factories to fulfil its contract with the UK.

And European sources say the scope of the export ban was expanded to give eurocrats more opportunity to target shipments to our shores.

Under the powers, vaccine manufacturers must apply for permission to send their doses of Covid vaccines abroad.

Brussels will review whether their destination has a “higher vaccination rate than the Union or where the current epidemiological situation is less serious than the Union”.

“Exports to those countries may thus threaten the security of supply within the Union,” the regulation states.