As he ran for president last year, Joseph R. Biden Jr. contorted his campaign to appease both wings of the Democratic Party, trying to excite progressives with an ambitious policy platform while assuring moderates he opposed structural changes to the political process.

Now, faced with the realities of governing and dual crises of public health and economic stagnation, Mr. Biden is increasingly squeezed by members of his own party who see an inevitable collision course between his deference to Washington norms and his promises of far-reaching change.

Some progressive Democrats, who have been keeping their powder dry on Mr. Biden since he won the presidency, spoke out in frustration after he staked out two moderate positions at a town hall event in Milwaukee on Tuesday: a willingness to negotiate on the $15 minimum wage he had proposed, and skepticism of a sweeping student loan cancellation program.

On Wednesday, after Mr. Biden also signaled flexibility on his sweeping immigration plans, activists said that they were willing to let him try for a bipartisan deal, but would not wait forever.

And on Friday, it was the Biden administration’s turn to be concerned: Senator Joe Manchin III of West Virginia, one of the most moderate Democrats in Washington, announced that he would oppose the president’s choice to lead the Office of Management and Budget, imperiling the nomination with an act of friendly fire.

It is all a sign that the big tent of the Democratic Party is set for a stress test under Mr. Biden unlike any it has faced while in power in recent decades. Democrats have long prided themselves on including liberals, moderates and even conservative Democrats in the tent, in sharp contrast to the recent Republican moves in several states to censure members for disloyalty to former President Donald J. Trump.

Still, even though Democrats control Washington, they are hardly united by the same governing goals: The party’s ideological blend of moderate and progressive voices helped it win back the White House and the Senate, but elements of that coalition could threaten the most ambitious parts of Mr. Biden’s agenda.

“History tells us two years after Obama won, two years after Clinton won — Republicans did phenomenally well,” said Senator Bernie Sanders of Vermont, a leading progressive and presidential candidate last year. “And they did because Democrats had the power and they did not exercise that power for working families. And I think Joe Biden understands that.”

Senator Elizabeth Warren of Massachusetts, who endorsed ending the filibuster during her own presidential run, said in an interview that Democrats “can’t give Mitch McConnell a veto over the same things as the American people sent us to Washington to do.”

“Our job is to deliver for the American people. Period,” she said. “And I think that Democrats are unified on that. But the point is not the unity. The point is the things we’re trying to get done.”

Progressives see issues like a $15 minimum wage, canceling student loan debt and expanding voting rights as a baseline to determining whether Mr. Biden’s legacy will be his defeat of Mr. Trump or, as his campaign slogan promised, building the country back better.

The moderates, including Mr. Manchin and other Democratic senators like Kyrsten Sinema of Arizona, argue that the path to success in battleground states begins with setting a tone of unity and bipartisanship, as evidenced by both senators’ commitment to keeping the Senate filibuster, which has often stood in the way of major legislation. 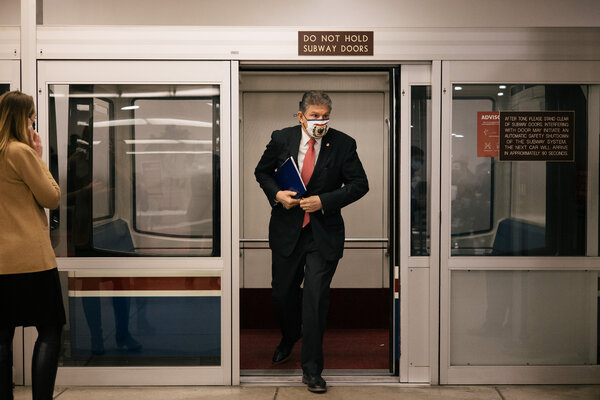 In Mr. Manchin’s statement opposing Mr. Biden’s nominee for the Office of Management and Budget, the Democratic operative Neera Tanden, he focused on unity. Citing old tweets of hers that were critical of Republicans and progressives, Mr. Manchin said her confirmation would have a “toxic and detrimental impact” on the administration’s relationship with Congress.

“We must take meaningful steps to end the political division and dysfunction that pervades our politics,” he said. “At a time of crisis, it is more important than ever that we chart a new bipartisan course.”

The debate among Democrats exposes the difference between vague pledges made during campaign season and actual governing values. For more than a year, the party was held together by its shared goal of defeating Mr. Trump, a mantra that kept moderates at bay and progressives in line in addition to driving activism and grass-roots fund-raising. Now, with Mr. Biden in office, the divisions that always lurked underneath the surface are taking shape.

Where Mr. Biden falls is the ultimate unknown. A longtime institutionalist, he has said he opposes ending the filibuster, giving cover to his party’s centrist wing. But some Democrats believe that his administration is playing out its options and that once he faces the inevitable opposition of Republicans, he will nix Washington traditionalism in favor of passing his agenda.

During his town hall event in Wisconsin, Mr. Biden signaled an openness to negotiations about the minimum wage, speaking of a gradual increase while also affirming his commitment to $15 per hour. He also rejected one question about whether he intended to cancel up to $50,000 in student debt via executive order.

“I will not make that happen,” he said.

The answer set off an outcry among progressives, student activists and some members of Congress, who argued that he had not only the legal authority but also a political mandate to act.

Ms. Warren penned a letter with Senator Chuck Schumer of New York, the majority leader, that said they were confident the Biden administration would “agree with the standards Obama and Trump used as well as leading legal experts who have concluded that the administration has broad authority to immediately deliver much-needed relief to millions of Americans.”

In the phone interview, she said Mr. Biden had run not only on unity and restoring bipartisanship, but also on the most progressive policy platform in history.

There is also an increasing activist drumbeat of pressure on Mr. Biden and senators like Mr. Manchin who have at times stood in the way of progressive change. During a virtual meeting last week between Mr. Manchin and low-income West Virginians that was convened by the grass-roots group the Poor People’s Campaign, worker after worker pressured the senator to embrace a $15 minimum wage, which he has opposed.

“It feels like he’s got his head in the clouds,” Brianna Griffith, a constituent who met with Mr. Manchin, said afterward. “Do they understand what’s happening to poor West Virginians?”

“Enough is enough,” said Pam Garrison, another worker who met with Mr. Manchin. “We’re tired of putting the filthy rich in silk beds and us sleeping on straws.”

In a statement, a spokeswoman for Mr. Manchin said he “appreciated the opportunity” to meet with members of the Poor People’s Campaign and “discuss the issues most important to them.” She pushed back on the idea that Mr. Manchin’s resistance to a $15 minimum wage meant he did not support low-income workers, and pointed to previous public statements in which he has said he would support a smaller wage increase, citing concerns from the business community.

Mr. Manchin’s position is also bolstered by a political reality that places moderate voters at the forefront — a fact that Mr. Biden’s White House is keenly aware of. For Democrats to maintain their House majority in the midterm elections next year, they must hold seats in Republican-drawn districts that are often populated by moderate suburban voters. In the Senate, where Democrats are seeking to expand their razor-thin control of the chamber in 2022, they must secure tough statewide victories in places like North Carolina, Ohio and Pennsylvania.

Those who want Mr. Biden to embrace major legislation say the moderates have it wrong — delivering for voters, they say, will protect the party during the midterms, not deferring to Washington rules.

Mr. Sanders took aim at the recent news that a moderate think tank, Third Way, was working on a project seeking to push Democrats toward the center for the midterm elections. He said that issues like canceling student debt, raising the minimum wage to $15 an hour and combating climate change were “political winners.”

The American working class today — white, Black, Latino — they are hurting. They want us to respond vigorously,” he said. “If we do so, I think that they will reward us in 2022. If we fail them, and the Republicans can go around and say, ‘Hey, you gave these people the House, the Senate and the White House and they did nothing for you,’ we will not do well in 2022.”

Still, the entrenchment by moderate senators — and the president’s current deference to it — presents a challenge for activists hoping to influence the administration. And while progressive elected officials are confident that Mr. Biden will side with them in the end, a growing chorus of activists is looking to him for more immediate action.

K Trainor, a student activist who has worked with progressive groups to turn out college students for Democrats, said Mr. Biden’s answer at the town hall was deeply disappointing. She said that if the administration didn’t deliver for young voters, it would make it harder to persuade them to turn out in future elections.

“I think a lot of people in my generation are asking, ‘Where is the courage?’” Ms. Trainor said. “It feels like they’re backtracking and we’re not even 100 days in.”

The Rev. William J. Barber II, a co-chair of the Poor People’s Campaign who organized the West Virginia workers’ meeting with Mr. Manchin, said the debate reflected an ugly underbelly of Democratic politics. While poor and low-income workers, particularly those who are racial minorities or young people, make up the core of the Democratic base, he said, the policies that they care about most have often been sacrificed because of political calculations.

They are the human cost of the big tent, he said.

“Democrats ran on this, they put it in their platform and they said this is what needs to happen,” Dr. Barber said. “It would be the ultimate abandonment and betrayal to then get here and have the power to do it, and then retreat.”