A need to retest more than one-and-a-half million vaccine doses – as well as delays to doses arriving from India – will lead to a “tighter” supply of COVID jabs next month, Health Secretary Matt Hancock has told MPs.

The NHS has warned of a month-long “significant reduction” in weekly supply of vaccines in a letter to local health leaders. 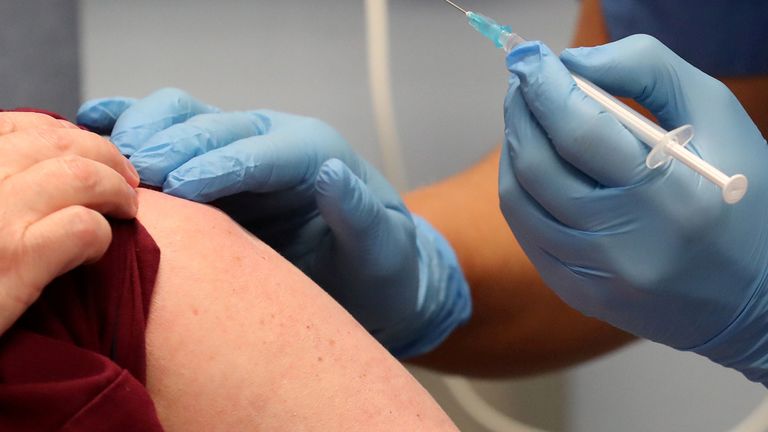 Explaining the reasons for the reduced number of vaccines in April, Mr Hancock told the House of Commons: “In the last week, we’ve had a batch of 1.7 million doses delayed because of the need to retest its stability.

“Events like this are to be expected in a manufacturing endeavour of this complexity and this shows the rigour of our safety checks.

“And we have a delay in a scheduled arrival from the Serum Institute of India.”

It is understood the delayed supply from the Serum Institute totals five million doses of the Oxford-AstraZeneca vaccine.

The health secretary said, during April, there are around 12 million people in the UK who require second doses of COVID vaccines.

“These second doses can’t be delayed as they have to be delivered within 12 weeks of the first dose,” he said.

He told MPs the UK was “currently right now in the middle of some bumper weeks of supply”.

But he admitted vaccine supply in April would be “tighter than this month and we have a huge number of second doses to deliver”.

Mr Hancock praised the partnership with the Serum Institute as one the UK “can be proud of”.

He thanked for them for their “incredible work” in producing one billion doses of the AstraZeneca vaccine for the UK and the rest of the world this year.

An NHS letter to local health leaders across the country has warned of a “significant reduction in weekly supply” from 29 March for a four-week period.

It added that “volumes for first doses will be significantly constrained”, with healthcare providers told those aged 49 and under should only be offered a vaccine in “exceptional circumstances” – such as if they are clinically vulnerable or a frontline care worker.

Vaccination centres were told to close unfilled bookings from 29 March onwards – and to ensure no further appointments are scheduled for the whole of April.

Vaccine supplier Pfizer has said its deliveries to the UK for the first three months of the year “remain on track”.

And AstraZeneca has said its UK domestic supply chain “is not experiencing any disruption and there is no impact on our delivery schedule”.

A spokesperson for the Serum Institute said: “Five million doses had been delivered a few weeks ago to the UK and we will try to supply more later, based on the current situation and the requirement for the government immunisation programme in India.”