Brexiteer minister Steve Baker apologised to Brussels today, claiming the behaviour of him and some of his colleagues was wrong during EU negotiations. Speaking at the Conservative party conference in Birmingham, the former depth chair of the European Research Group said he had not behaved “in a way that encouraged Ireland, the European Union and others to trust us” in talks.

He added that he had said “sorry” when meeting Irish leaders following the death of the Queen and that he believed “the ice is thawing a bit” as a result.

He told Conservative party members: “As one of the people who perhaps acted with the most determination to get the UK out of the EU, I think we have to bring some humility to this situation.

“And it’s with humility I want to accept and acknowledge that I and others did not always behave in a way that encouraged Ireland, the European Union and others to trust us to accept they have legitimate interests. 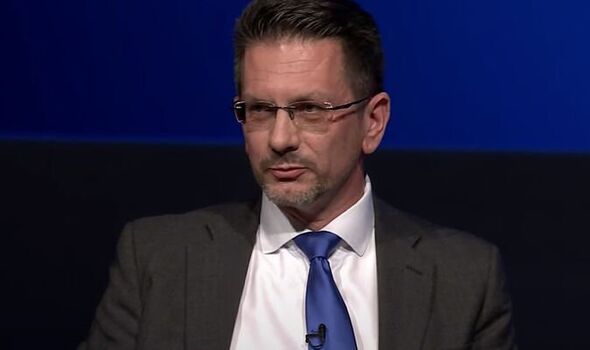 “And I’m sorry about that because relations with Ireland are not where they should be and we all need to work extremely hard to improve them.”

Britain and Brussels are currently locked in a row over the implementation of the Northern Ireland Protocol, signed as part of the 2019 Brexit Withdrawal Agreement.

Unionists argue the EU’s purist implementation of the agreement had undermined the province’s place within the United Kingdom.

They say bureaucratic customs checks have led to trade frictions.

Attempts to find a solution to the problems caused by the Protocol have so far failed, with a lack of trust between the two sides largely blamed for the deadlock.

However, there is thought to be a renewed desire to find a long-lasting fix before the anniversary of the Good Friday Agreement next spring.

Mr Baker added that while the UK wanted to show “humility” in order to help add fresh momentum into talks, ministers would continue to be resolute in ending the problems caused by the Protocol.

He continued: “No one should underestimate our resolve, this Government’s resolve, to get progress on the Protocol.

“It is not acceptable that Northern Ireland is so separate to GB right now under the Protocol.

“A Protocol at the moment that is only partially implemented.

“So, we are resolute in getting change.

“That change is set out in the Bill that we have presented that is going through Parliament in the House of Lords.”