Brexit: Patel says there are 'no plans' for deadline extension

The Brussels diplomat said Boris Johnson’s refusal to offer serious concessions was preventing a breakthrough in the talks. Ahead of a gathering of EU27 ambassadors, Mr Barnier told reporters the talks had reached a “crucial moment”. He said: “We are really in the crucial moment. We are giving it the final push. In ten days the UK will leave the single market.”

Mr Barnier warned the senior EU envoys the trade talks could go beyond the end of Britain’s transition out of the EU at the end of the year with Downing Street refusing to give in to the bloc’s demands.

An EU diplomat said: “Progress has been made. Most issues are preliminarily closed or close to being agreed. However, differences on fisheries remain difficult to bridge. Unfortunately, the UK is not moving enough yet to clinch a fair deal on fisheries.

“EU negotiators are in a last push now to make progress and to clinch a deal acceptable for both sides.

“The EU will not close its door to the UK and remains ready to negotiate even beyond January 1.” 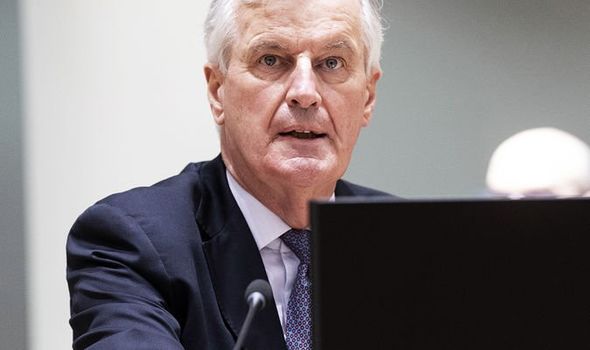 Meanwhile the Prime Minister and Ursula von der Leyen have taken personal charge of hammering out a deal on fishing as Brexit talks reach the endgame.

Mr Johnson and the European Commission President were been locked in frequent phone calls as they attempted to find a breakthrough on the last stumbling block.

They established a direct hotline between Downing Street and the Berlaymont to oversee the final stretch of the negotiations.

Officials on both sides are hopefully a deal could be reached as early as tomorrow if the talks go smoothly.

But some fear the wrangling over the Brexit trade deal could drag on until New Year’s Eve as they struggle to overcome “very, very difficult” differences on fishing and the so-called “level playing field”.

Mr Johnson was said to have tabled a fresh offer on fishing during two phone calls with Mrs von der Leyen on Monday night.

The PM proposed that EU boats should hand back 30-35 per cent by value of their current catches in Britain’s coastal waters, to be phased in over five years.

Experts said that would leave UK trawlermen landing 70 per cent of fish in our waters by 2026.

But EU officials were said to have rejected the plans and are pushing for a much longer transition of about seven years and a reduction of just 25 per cent.

Mr Barnier raised concerns that Britain wanted to strip Pelagic species – such as Mackerel – out of the agreement.

He also said the UK was refusing to grant access for European boats to our exclusive 12-mile zone.

There is still an ongoing row over how to manage the future relationship if the UK decides to largely lock European vessels out of our coastal waters.

A possible compromise may see the UK readily able to lock out EU vessels, but at the risk of punitive tariffs being applied across the trade deal.

Brussels could use an independent arbitration panel to apply for special “rebalancing measures” equal to the value of fishing opportunities lost.

European boats land around £590 million worth of fish from our waters each year, meaning the maximum tariffs applied to British goods would be £400m.

It is understood Mrs von der Leyen is so keen to wrap-up a deal and is now heavily lobbying EU coastal states to accept a compromise.

Mrs von der Leyen is also in “constant contact with all parties” and is likely to hold talks with key figures, such as France’s Emmanuel Macron and Angela Merkel, as the Brexit talks continue.