Concerned over future relations with the UK, Brussels is preparing provisions around the Northern Ireland protocol to try and ease traders in the nation. EU officials are even planning to hold an event to inaugurate the formal ratification of the Trade and Cooperation Agreement. Discussions have been undertaken at a senior level to mark the moment the deal is formally agreed and pave the way for a more harmonious future between the two sides.

Unless there is a clear reset in relations, there is fear in Brussels ties with the UK could become one of “perpetual tension”.

The appointment of Lord David Frost to oversee future relations is one seen as more “about confrontation than cooperation”, RTE understands.

Although an event to mark the formal ratification could be planned, officials are prepared for tough negotiations over the protocol and the recognition of the EU embassy in London.

RTE’s Europe Editor Tony Connelly reported said a “handshake moment” could be arranged between Boris Johnson and his EU rivals. 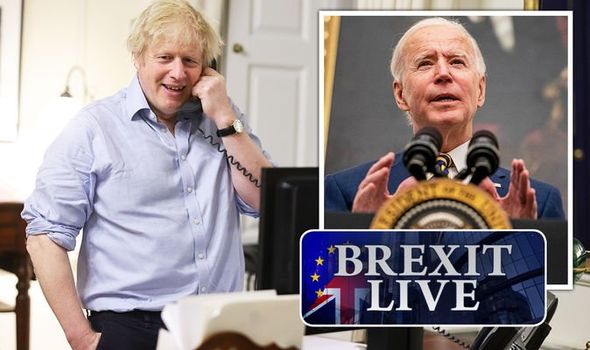 But he warned “hard negotiations” may have to come first to create enough “political space” to reach an agreement.

This week, the UK granted an extension to the formal ratification of the Brexit deal.

MEPs are now expected to ratify the deal later this month before member states give their formal approval next month, which could spark negotiations over the Northern Ireland protocol and the shellfish ban on UK exporters.

7.19am update: EU planning to reset relations with the UK in bad to smooth relations

EU officials are discussing plans to hold an event to mark the formal ratification of the Trade and Cooperation Agreement in order to reset relations with the UK.

Brussels officials are concerned over the future relationship with the UK and saw Lord Frost’s promotion to Cabinet, as indicative of impending confrontation rather than cooperation.

With the deadline to ratify the deal extended, it is hoped a symbolic event could be held to mark a more harmonious relationship with Britain.

Although relations may be reset, according to RTE’s Tony Connelly, tough negotiations are ahead concerning the Northern Ireland protocol and the ban on shellfish.

He said: “It’s understood that there would have to be hard negotiations in the coming weeks in order to provide the political space for a proper reset.

“The Protocol remains the most difficult issue, following the Commission’s move to invoke Article 16 at the end of January.”