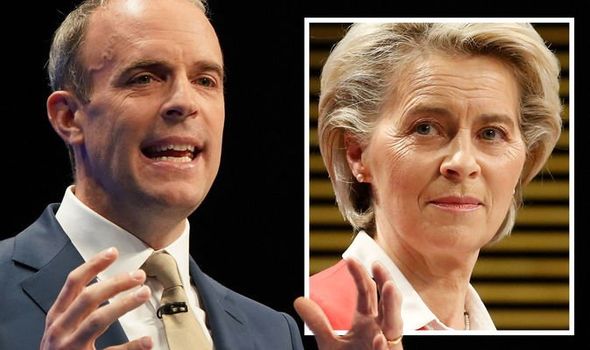 The Justice Secretary and Deputy Prime Minister will next week announce a proposed overhaul of the Human Rights Act (HRA) in a bid to prevent UK institutions and courts from being “dictated to” by European judges in Strasbourg. Mr Raab aims to protect UK laws and traditions from “undue interference” while continuing to obey laws within the European Convention on Human Rights (ECHR).

Though not detracting from the ECHR, Parliament is looking to reserve the right to interpret rulings in ways that fit the nation.

A source said: “You cannot overturn a Strasbourg ruling but you could decide how we interpret it.

“We decide how best to change the law based on UK traditions and laws.

“We would decide how to comply with Strasbourg case law.”

Mr Raab’s consultation paper will set out key measures by which he aims to curtail the influence of the ECHR. These are expected to include a mechanism that would allow Parliament to “correct” case law that it did not agree with “in a specific or special way”, and the right for UK courts not to abide by Strasbourg case law.

The source said: “They should give primacy to UK case law, first and foremost.”

Mr Raab told peers this week: “I think the drift towards continental-style privacy laws innovated in the courtroom, not by elected lawmakers in the House of Commons, is something that we can and should correct.”

It is thought the Justice Secretary will also propose tightening the interpretation of Article 8, which protects the right to family life, to avoid it being misused by failed asylum seekers and foreign criminals to prevent being forced to leave the UK. Article 9 is said to account for two-thirds of successful appeals.