Boris Johnson has called for “urgent action” from the EU to resolve “outstanding problems” with the post-Brexit arrangement for Northern Ireland.

The prime minister accused Brussels of having “undermined” and “provoked concern” over the Northern Ireland Protocol, following the recent row over COVID vaccines.

But he vowed that Northern Ireland’s place in the UK will be “protected and strengthened”.

Mr Gove and Mr Sefcovic are co-chairs of the EU-UK Joint Committee, which is responsible for overseeing and implementing the Brexit Withdrawal Agreement – including the Protocol.

The discussions will take place amid continuing tensions over the Protocol, which have also seen Ms Foster’s Democratic Unionist Party reassert their opposition to the EU-UK agreement.

The prime minister posted on Twitter: “Our commitment to the people of Northern Ireland and our Union is unshakeable.

“Let me underline that, now & in the future, Northern Ireland’s place in the UK will be protected and strengthened.

“What is needed is urgent action from the EU to resolve outstanding problems with Protocol implementation, so as to preserve the gains of the Belfast Good Friday Agreement & ensure that Northern Ireland benefits from Brexit just like every other part of our United Kingdom.”

Last week, the EU controversially attempted – and subsequently abandoned – an effort to trigger Article 16 of the Protocol, a means of overriding part of the Brexit agreement, as part of its plan for export controls on COVID vaccines. 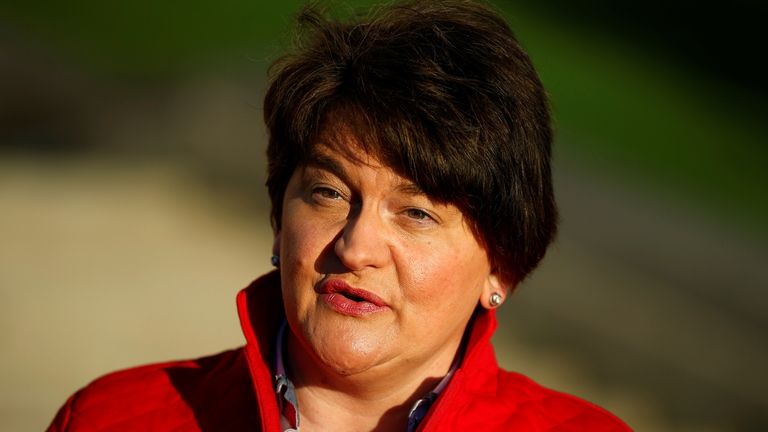 Meanwhile, post-Brexit border inspections have been suspended at two of Northern Ireland’s busiest ports due to safety fears for staff following recent threats.

Police have said loyalist paramilitaries are not involved in threats made to workers conducting border checks, but that disgruntled individuals or small groups may be responsible.

The DUP on Tuesday night reiterated their condemnation of the threats, but also launched a fresh effort to be “freed from the Protocol”.

They have been consistent critics of the arrangement, due to what they see as the imposition of a new economic barrier between Northern Ireland and Great Britain.

The Protocol was designed as a means of ensuring there was no hard border on the island of Ireland and so allows Northern Ireland to remain under some EU rules.

But this means there has to be customs declarations on goods entering Northern Ireland from Great Britain, including checks on some products.

Businesses have blamed the new post-Brexit requirements for recent shortages of some products in Northern Ireland’s supermarkets.

The DUP said Northern Ireland was “already suffering real economic and societal difficulties as a consequence of the first month of the Protocol”.

And they urged people to sign an online UK parliamentary petition calling for the UK government itself to trigger Article 16 as a means to “immediately remove any barriers to unfettered trade” between Northern Ireland and Great Britain.

In the House of Commons on Tuesday, Mr Gove said there were “significant issues” with the implementation of the Protocol that he “would not describe as teething problems”.

He called for the three-month light-touch regulation grace period for supermarkets following the end of the Brexit transition to be extended.

“We do need to make sure that supermarkets and other traders can continue, as they are at the moment, to be able to supply consumers with the goods that they need,” Mr Gove told MPs.