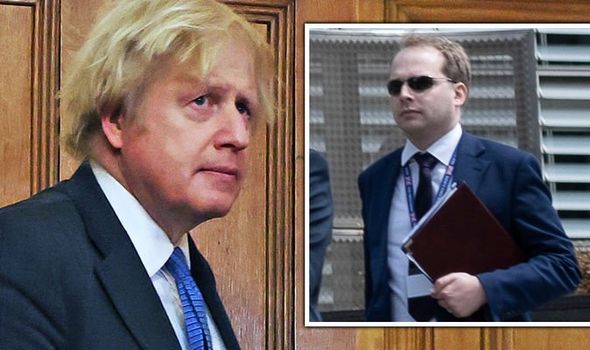 Oliver Lewis, who previously worked on the Brexit campaign, has resigned, according to The Times.

The former head of the unit, Luke Graham, stepped down at the start of this month.

The Times political editor Steven Swinford wrote on Twitter: “Oliver Lewis has quit Number 10 as head of the Union unit.

“Lewis – a Dominic Cummings ally – felt his position was being made ‘untenable’ by others in No 10.

Retweeting the comments from Mr Swinford, Scotland’s First Minister Nicola Sturgeon suggested Mr Lewis had quit after “realising how threadbare the case” was for the Union.

She wrote: “Disunity in the Union unit.

“Or maybe just despair at realising how threadbare the case for it is.”

The departure of Mr Lewis follows that in November of Mr Johnson’s most senior adviser Dominic Cummings and director of communications Lee Cain, who he worked alongside during the Brexit referendum campaign in 2016.

In 2014, Scots voted by a margin of 55 percent to 45 percent against Scottish independence and to remain part of the UK.

However, the SNP and Scotland’s First Minister Nicola Sturgeon have continued to ramp up their campaign for a second referendum on independence.

They have argued Brexit – which Scots voted against by a margin of 62 percent to 38 percent – was implemented against the will of the Scottish people, therefore providing the party with a mandate to hold a second vote on independence.

Prime Minister Mr Johnson has rejected repeated demands for another referendum, insisting the result from the original vote nearly seven years ago stands and must continue to be honoured.

But Ms Sturgeon has vowed the SNP would push further for a second vote should the party win a majority at the upcoming Scottish elections, scheduled to take place on May 6.