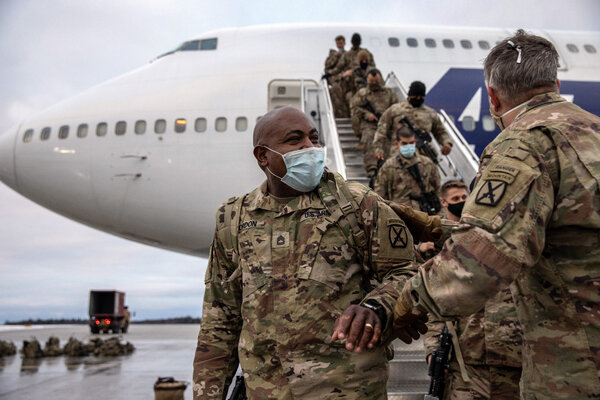 President Biden has decided to withdraw all American troops from Afghanistan by Sept. 11, 20 years after the terrorist attacks on the World Trade Center and the Pentagon launched the country into its longest war, United States officials said Tuesday.

The decision will keep more than 3,000 American troops on the ground in Afghanistan beyond the May 1 withdrawal deadline announced by the administration of former President Donald J. Trump.

But it signals what Mr. Biden plans to present as a definitive end to America’s “Forever War.”

Administration officials said that since Mr. Biden was fixing a definite date on an American troop withdrawal, he hoped to avoid an increase in violence — which the Taliban have threatened if the United States kept troops beyond May 1.

The decision was reported earlier Tuesday by The Washington Post.

A new intelligence report released Tuesday offered a grim assessment of Afghanistan and the prospects for peace. American intelligence agencies assessed that a peace deal was unlikely in the next year, and that the Taliban would make battlefield gains.

“The Afghan government will struggle to hold the Taliban at bay if the coalition withdraws support,” the report said.

Military and other officials who favored troops remaining in the country longer had used a similar classified intelligence assessment to argue for a slower drawdown, worried that an exit of American troops could trigger a wider civil war and an eventual return of terrorist groups.

The report released Tuesday did not contain an assessment of the likelihood of a return of Al Qaeda to Afghanistan, and some senior officials remain skeptical the Taliban would allow it. The report did say that Afghan government forces continued to hold major cities. But they have been “tied down in defensive missions and have struggled to hold recaptured territory.”

Secretary of State Antony J. Blinken and Defense Secretary Lloyd J. Austin III are in Europe this week and no doubt will be discussing Mr. Biden’s withdrawal plans with NATO allies.

Afghan officials are afraid that Mr. Biden’s decision to keep U.S. troops in Afghanistan beyond the May 1 deadline, as outlined in last year’s peace deal, would pressure Kabul’s government to release the roughly 7,000 Taliban prisoners the insurgent group has long asked to be freed.

Right now, those prisoners and the lifting of United Nations sanctions were some of the last leverage the United States had over the Taliban. The Afghan government has been staunchly opposed to any further prisoner release.

After 5,000 Taliban prisoners were released last fall to start negotiations between the Afghan government and the Taliban, government officials say many of them returned to the battlefield.