WASHINGTON — President Biden declared on Wednesday that “it is time to end the forever war” in Afghanistan, saying that the United States had long ago accomplished its main mission of denying terrorists a haven in the country and that leaving American forces there was no longer worth the cost in blood and money.

Speaking from the same spot in the White House where President George W. Bush ordered the start of the war after the Sept. 11 attacks nearly two decades ago, Mr. Biden made a case that there was no longer any justification — if there ever was — to believe that the United States military presence could turn Afghanistan into a stable democracy.

The roughly 2,500 American troops on the ground there and other NATO forces, he said, would be gradually withdrawn starting on May 1, with the process complete by Sept. 11, a timetable intended to signal his determination to end a vexing and largely failed chapter in American foreign policy.

Military officials suggested the exit could be even more rapid, leaving only a token guard force for the American Embassy. NATO forces, which today have a far larger presence than the United States, would also depart, European officials said.

“War in Afghanistan was never meant to be a multigenerational undertaking,” Mr. Biden asserted, noting that service members serving in Afghanistan now had parents who served in the same war.

“We were attacked,” the president said in a somber, 16-minute speech laced with flashes of emotion. “We went to war with clear goals. We achieved those objectives.”

Mr. Biden has been a critic of the American presence for more than a dozen years, though his concerns were often overruled when he was vice president. Now, invested with the authority to order an exit, he argued that the United States had succeeded in its one real task: ousting Al Qaeda and making sure that the country would never again be the launching pad for a terrorist attack on the United States, as it was on Sept. 11, 2001.

“We cannot continue the cycle of extending or expanding our military presence in Afghanistan, hoping to create ideal conditions for withdrawal, and expecting a different result,” Mr. Biden said.

“I’m now the fourth United States president to preside over American troop presence in Afghanistan,” he continued. “Two Republicans, two Democrats. I will not pass this responsibility on to a fifth.”

Mr. Biden’s tone underscored what a humbling moment it was for the United States. So many of the objectives cited by the military and other proponents of a continued presence in Afghanistan — transforming the country into a stable democratic ally, weakening the Taliban, fighting corruption and the drug trade — had either proved beyond the abilities of the United States and its allies or had yielded only partial or tenuous gains.

And the cost — in lives, treasure and the focus of the nation — proved staggering. Mr. Biden said that as of Wednesday, more than 2,400 American service members had died in Afghanistan.

Moments after speaking, Mr. Biden traveled to Arlington National Cemetery to visit the graves of service members who lost their lives in Afghanistan. He said the decision to withdraw American troops was not difficult because it was “absolutely clear” to him that it was time to bring the war to an end.

Standing in the rain among rows of white headstones, the president said he was “always amazed at, generation after generation, the women and men who are prepared to give their lives for their country.” He said visiting the cemetery made him think of his son Beau Biden, who died of cancer in 2015 after serving in Iraq.

In his speech, Mr. Biden — who said he was the first president in 40 years to have a child serving in a war zone — rejected the idea that putting soldiers like his son in danger was the only way to achieve the United States’ goals in places like Afghanistan, where efforts to stabilize and modernize the country by rebuilding its military, civil society and infrastructure have largely faltered.

“We gave that argument a decade. It’s never proved effective,” the president said. “American troops shouldn’t be used as a bargaining chip between warring parties in other countries. You know, that’s nothing more than a recipe for keeping American troops in Afghanistan indefinitely.”

In announcing his decision, Mr. Biden made only passing mention of the other objectives that were added to the mission over the years and that came to justify the continued American military presence, including assuring an education for girls and opportunity for women, nurturing a sustainable economy and, in the end, creating leverage to force the Taliban into peace negotiations.

All may have been noble goals, he suggested, but keeping American troops in the country until they were accomplished was a formula for a perpetual presence after the killing of Al Qaeda’s leader, Osama bin Laden. 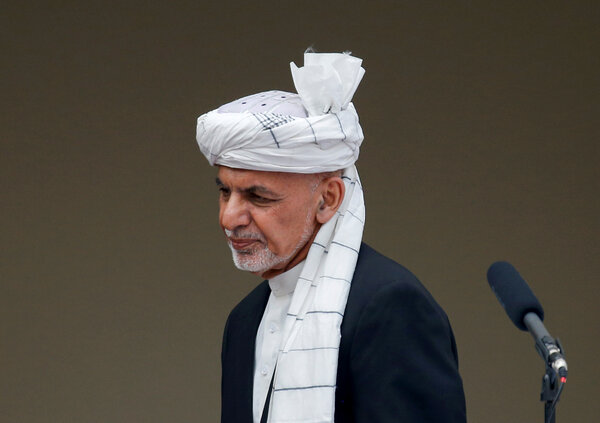 “We delivered justice to Bin Laden a decade ago,” he said. “And we’ve stayed in Afghanistan for a decade since. Since then, our reasons for remaining in Afghanistan have become increasingly unclear.”

Speaking after a meeting with allies in Brussels, Secretary of State Antony Blinken said that the NATO troop withdrawal by Sept. 11 did not mean an end to the American commitment to Afghanistan, which would include aid and advice to the military and to the government.

“Bringing our troops home doesn’t mean the end of our relationship with Afghanistan,” he said.

If Mr. Biden carries through on his vow to remove all American troops permanently based in the country by the 20th anniversary of 9/11, he will have accomplished a goal that his two immediate predecessors, Presidents Barack Obama and Donald J. Trump, embraced but never completed. Yet a clean break will not be easy, and the risks are considerable.

In a series of briefings for Mr. Biden in recent weeks, Pentagon officials have argued for a continued, modest presence in Afghanistan to collect intelligence and provide support to still-shaky Afghan forces. They also warned that the Taliban could attack American troops and their NATO allies on their way out of the country.

So Mr. Biden issued a warning on Wednesday, saying the United States would “defend ourselves and our partners with all the tools at our disposal.”

The president’s speech included an explicit reminder of his own, long-held belief that victory in the war was impossible, and that no matter how long Americans remained, the final result would be little different. With a somber tone, he neither declared victory nor admitted defeat; instead, he retreated to the original, narrow objective of protecting the United States interests, and said that had been achieved.

“We went to Afghanistan because of a horrific attack that happened 20 years ago,” Mr. Biden said, noting the bravery of the men and women who fought in the country after 9/11. But he added, “That cannot explain why we should remain there in 2021.”

On Oct. 7, 2001, just weeks after the attacks on the World Trade Center and the Pentagon, Mr. Bush used the Treaty Room, where the Spanish-American War was formally concluded in 1898, to tell Americans that the United States was invading Afghanistan.

Twenty years later, Mr. Biden, speaking from the same room, called that cause “just” but said that the clarity of the mission Mr. Bush committed to had become muddled, and he said that he could no longer accept the argument that more time in Afghanistan would produce better outcomes for the American people.

White House officials said Mr. Biden had spoken with Mr. Obama about his decision, and the president said he had also informed Mr. Bush.

“As he has maintained since leaving office, President Bush will decline to comment on private phone calls or his successors,” said Freddy Ford, his chief of staff.

A series of Afghan governments have failed to sustain control over vast sections of the country, the essence of the American military’s “clear, hold, build” strategy for years after the initial invasion. While a succession of Afghan leaders, supported by the United States and its allies, promised to fight corruption, end the drug scourge and establish stable governance, all of those gains have proved fragile at best.

Women have taken a more prominent role in the government, and girls have educated on a scale not seen before the war began, but the future of those gains is in doubt if the Taliban gain more ground.

In a statement on Twitter, President Ashraf Ghani of Afghanistan said his country “respects the U.S. decision and we will work with our U.S. partners to ensure a smooth transition.” He added that his country’s security forces were “fully capable of defending its people.”

But in private, Mr. Ghani has fumed about the American decision, according to people who have spoken to him. He fears that it will embolden the Taliban, and give them little to no incentive to stick to the terms of the agreement they reached a year ago with Mr. Trump. And many around Mr. Ghani fear that his own government, already diminished in influence, could fall if the Taliban decide to try to take Kabul, the capital.

“Just because we withdraw from Afghanistan doesn’t mean the war ends,” said Lisa Curtis, a top Trump national security official who dealt with Afghanistan. “It probably gets worse.”

Mr. Biden is the first president to have rejected the Pentagon’s recommendations that any withdrawal be “conditions based,” meaning that security would have to be assured on the ground before Americans pulled back. To do otherwise, military officials have long argued, would be to signal to the Taliban to just wait out the Americans — after which they would face little opposition to taking further control, and perhaps threatening Kabul.

The decision was cheered by many Democrats but harshly criticized by most Republicans, who predicted that the withdrawal of American troops would embolden terrorists and hasten the collapse of the Afghan government.

Senator Mitch McConnell of Kentucky, the Republican leader, called the decision “a grave mistake” and a “retreat in the face of an enemy.”

But even some architects of the original policy agreed that it was time to go. Douglas Lute, a retired general who ran Afghan policy on the National Security Council for Mr. Bush and then for Mr. Obama, wrote for CNN with Charles A. Kupchan on Wednesday that “those who argue that we need to stay in Afghanistan to thwart attacks against the homeland are wrong” because the terrorist threat from inside the country “has been dramatically reduced in the last 20 years.”

In a statement from Brussels, NATO foreign and defense ministers echoed Mr. Biden, announcing that the alliance would also begin withdrawing its own troops from Afghanistan on May 1. There are currently 6,000 to 7,000 NATO troops in Afghanistan, not counting those from the United States.

The NATO statement said that despite the troop withdrawal, it would “continue to stand with Afghanistan, its people and institutions in promoting security and upholding the gains of the last 20 years.”