A meeting with mayors and police chiefs was meant to show that the president is aggressively confronting gun violence. But he also risks alienating liberals pushing for criminal justice reform. 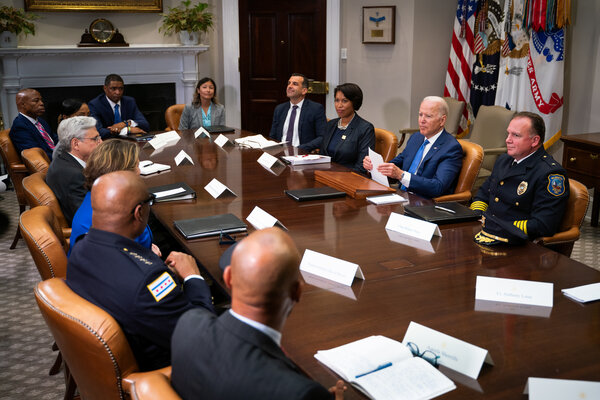 WASHINGTON — President Biden said on Monday that Americans owed law enforcement and community leaders “big time” as he met with mayors and police chiefs from some of the nation’s largest cities, sending a clear signal to progressives in his party and Republican critics that he would crack down on crime.

In a meeting at the White House, Mr. Biden urged the local officials to invest in police departments and establish community-based programs that could help rebuild trust between people of color and law enforcement.

“We know when we utilize trusted community members and encourage more community policing, we can intervene before the violence erupts,” Mr. Biden said.

The president and Attorney General Merrick B. Garland, who also attended the meeting, have “been at this a long time,” Mr. Biden said. “A long time. Most of my career has been on this issue.”

For Mr. Biden, the meeting was part of an increasingly urgent effort by the White House to demonstrate that the president is aggressively confronting gun violence as homicides rise in cities across the country and Republicans accuse his administration of being soft on crime. The president has called on Congress to pass measures that would close background-check loopholes, restrict assault weapons and repeal gun manufacturers’ immunity from lawsuits, but his call for a bipartisan gun control effort is stalled.

Last month, Mr. Biden called on states and local governments to use money from the American Rescue Plan to hire more police officers and beef up enforcement.

But the get-tough language is tricky for Mr. Biden, who risks alienating liberals in Congress and voters who are pushing for criminal justice reform after police killings of Black people last year. Some of the most vocal Democrats in Congress continue to demand that lawmakers defund police departments that employ racist tactics and instead invest in education, mental health or other social services.