WASHINGTON — President-elect Joseph R. Biden Jr. demanded on Friday that President Trump do more to confront the coronavirus infections exploding across the country, calling the federal response “woefully lacking” even as Mr. Trump broke a ten-day silence on the pandemic to threaten to withhold a vaccine from New York.

In a blistering statement, Mr. Biden said that the recent surge, which is killing more than 1,000 Americans and hospitalizing almost 70,000 every day, required a “robust and immediate federal response.”

“I will not be president until next year,” Mr. Biden said. “The crisis does not respect dates on the calendar, it is accelerating right now. Urgent action is needed today, now, by the current administration — starting with an acknowledgment of how serious the current situation is.”

Mr. Biden released his statement less than an hour before the president appeared in the Rose Garden at the White House, where he announced no new measures to slow the virus’s long-anticipated autumn surge, which he hardly acknowledged. 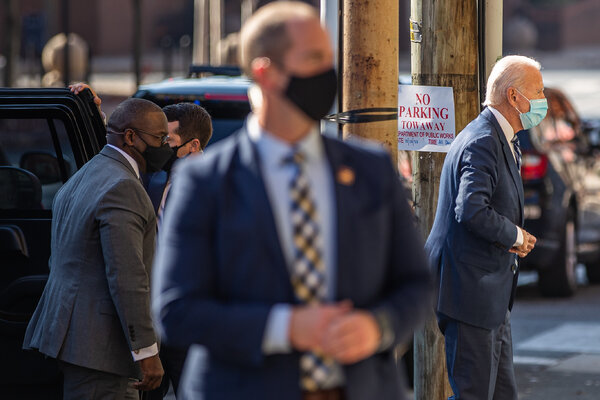 Mr. Trump hailed the news from Monday that a vaccine under development by Pfizer appeared to be 90 percent effective. But he vowed not to order widespread lockdowns as long as he remained in office and threatened to withhold distribution of the vaccine to New York because Gov. Andrew Cuomo said the state intended to conduct its own review of the vaccine’s approval by the federal government.

“He doesn’t trust the fact that it’s this White House, this administration, so we won’t be delivering it to New York until we have authorization to do so,” Mr. Trump told reporters in only his second public remarks since Election Day. “So the governor will let us know what he’s ready. He’s had some very bad editorials recently about this.”

It is not clear whether Mr. Trump would be able to follow through on that threat before he leaves office. Health care workers, older adults and other vulnerable populations could get access to a vaccine by mid-December, well before Mr. Biden’s Jan. 20 inauguration.

Standing next to Mr. Trump Friday afternoon, Moncef Slaoui, a pharmaceutical executive who was appointed by the president to oversee the vaccine development and distribution effort known as Operation Warp Speed, said that approximately 20 million people could be vaccinated in the United States in December.

But by the time broader distribution of a vaccine is underway next spring, Mr. Trump’s presidency will have long ended.

A spokesman for Mr. Cuomo, Rich Azzopardi, responded on Twitter, saying that Mr. Trump “has failed with his pandemic response, lied to Americans about how bad it was when he knew otherwise & was fired by voters for his incompetence. @NYGovCuomo is fighting to ensure the communities hit hardest by Covid get the vaccine. Feds providing 0 resources.”

Federal resources were very much on the minds of state officials as they grappled with infection numbers shooting skyward and hospitals on the verge of being overrun.

Gov. Tony Evers of Wisconsin, where the number of new cases reached a daily record 8,256 on Thursday, said whatever Mr. Trump said now could not make up for his refusals to wear a mask and his embrace of large public gatherings, at campaign rallies and at the White House.

While the outgoing administration could still help, Gov. Evers said, “they also report to a president who, frankly, isn’t the most consistent one as it relates to the things that count: masks, and making sure you’re not in public gatherings with a whole bunch of people to spread the disease.”

“They’re not going to play a huge political role here,” he added.

Jennifer Miller, a spokeswoman for the Wisconsin Department of Health Services, said much of the department’s response had been paid for by the Coronavirus Aid, Relief and Economic Security Act, known as the CARES Act, which is set to expire Dec. 31, thanks in part to Mr. Trump’s failure to negotiate new relief despite months of wrangling with Congress.

Kim Deti, a spokeswoman for the Wyoming Department of Health, said health officials there were also concerned about having enough money to continue contact tracing and other operations that they believed had kept the state’s virus cases low for much of the year.

“Will funding run out by the end of the year? Will it be continued?” Ms. Deti wrote in an email. “It’s clear our Covid-19 response will need to continue into 2021.”

On Friday, Dr. Slaoui told The Financial Times that Mr. Trump’s administration should share information about the program with Mr. Biden’s transition team, something that has not yet happened because Mr. Trump has refused to concede defeat.

“It is a matter of life and death for thousands of people,” he told the newspaper. “The operation has always been about making vaccines and therapeutics available faster for the country and for the world.”

Mr. Biden’s statement on Friday underscored his pledge to make the pandemic his top priority when he takes office. Since claiming victory last Saturday, the president-elect has named a 13-member Covid advisory board, delivered several speeches about the topic, and repeatedly urged the public to wear masks and practice social distancing.

By contrast, since Election Day, Mr. Trump has tweeted more than 264 times, much of it falsely claiming that the election was stolen from him and only twice about the virus.

There have been no public briefings by the Centers for Disease Control and Prevention and little public guidance on the pandemic’s latest deadly surge.

“I believe in one government at a time, but at the moment we have no government with respect to coronavirus,” said Richard J. Danzig, a former Navy secretary to President Bill Clinton and a senior adviser with the Johns Hopkins Applied Physics Laboratory.

The White House’s coronavirus task force still meets once a week, but with little resemblance to its functions in the spring, when it gathered to update reporters each day and published federal guidelines. Vice President Mike Pence, who leads the task force, said on Friday that members of the group would discuss the increase in cases during their weekly call with governors on Monday.

“I’m not silent, that’s for sure,” Dr. Fauci said in an interview this week.

Dr. Fauci, who has not spoken to Mr. Trump since weeks before Election Day, added that he was convinced the United States could turn the current trends around if everyone wore a mask, practiced social distancing and avoided crowded settings, particularly indoors.

“Those are tools that have been shown to be effective in blunting surges,” he said.

Mr. Trump claimed at Friday’s event that the effectiveness of Pfizer’s vaccine was the result of the company’s participation in Operation Warp Speed. Pfizer took no money from the program for research and development, but it did sign a $1.95 billion contract to guarantee the government would purchase its vaccine. Mr. Trump chided the company for initially saying that its vaccine had not been helped by Warp Speed.

More than 161 former public officials, many with deep national security and military experience, said in a statement Friday that the administration’s refusal to give Mr. Biden immediate access to intelligence briefings and other transition services posed “a serious risk to our national security.”

They noted that delays in the transition after the contested election of 2000 left the country vulnerable to the Sept. 11, 2001 attacks, and that the 9/11 Commission had recommended minimizing disruption during presidential transitions.

“That recommendation carries all the more force amidst a once-in-a-century pandemic,” they wrote.

Sheryl Gay Stolberg and Noah Weiland contributed reporting from Washington, and Nicholas Bogel-Burroughs and Will Wright from New York.