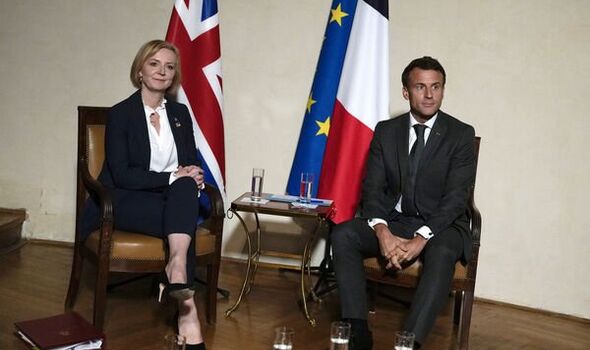 French President Emmanuel Macron has offered Liz Truss the hand of friendship as the embattled British Prime Minister seeks for friends and allies. With Tory MPs still plotting to have her replaced the man she once said “the jury is out” on whether he is a friend or foe has expressed his hope she will stick around to continue working with him.

Ms Truss and the French President had a call this evening to discuss the crisis in Ukraine.

Both have been pushing for a stronger international response against Russia and Vladimir Putin.

The readout from the meeting said: “The Prime Minister spoke to French President Emmanuel Macron this afternoon.”

“The leaders discussed their deep concern at Russia’s recent barbaric attacks on civilian areas in Ukraine.”

“They agreed the UK and France will continue to work closely together with allies to support Ukraine and coordinate our response to Russian aggression.”

However, the last part of the readout made it clear that President Macron had also lent Ms Truss some moral support.

It noted: “The Prime Minister and President Macron also welcomed the recent opportunity to meet in person at the leaders’ summit in Prague, and looked forward to continuing to deepen bilateral cooperation.”

The French President makes an unlikely ally for Ms Truss after the two have regularly clashed in the past.

The Prime Minister caused a stir at one of the leadership hustings in Norwich when she was asked whether Macron was “a friend or foe?”

She replied: “The jury’s out.”

She added: “I’ll judge him on his deeds not his words.”

Macron at the time responded: “If we are not able, between the French and British, to say whether we are friends or enemies – the term is not neutral – we are headed towards serious problems.”

Ms Truss has also clashed with him over fishing rights but most of all over the Northern Ireland Protocol which he has threatened the UK with a trade war over if it tries to water it down.

As Foreign Secretary Ms Truss introduced the legislation to amend the protocol and prevent the EU from breaking up the UK.

But the two have worked closely together since particularly on Ukraine.

Ms Truss has been short of political friends and allies in recent days after her mini-budget led to a collapse in the markets and forced her to replace Kwasi Kwarteng as Chancellor with Jeremy Hunt.

Yesterday Mr Hunt tore up her domestic tax cutting agenda and said he would be bringing in tax rises and spending cuts.

Meanwhile, Tory MPs are seeking to replace her with a unity candidate with names like Rishi Sunak, Mr Hunt, Penny Mordaunt and Defence Secretary Ben Wallace in the frame.