Top administration officials will meet with their Chinese counterparts for the first time on Thursday as the United States shifts to a more competitive posture with Beijing. 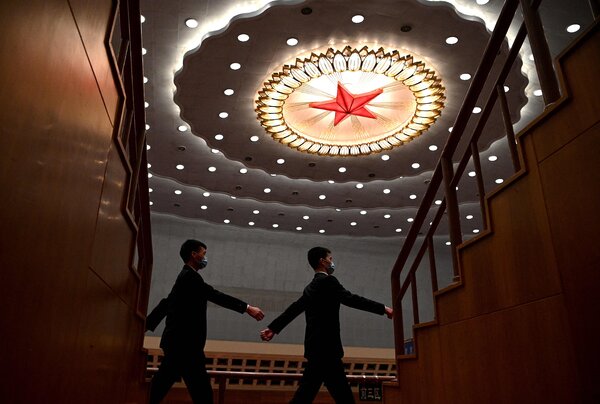 WASHINGTON — President Biden is engineering a sharp shift in policy toward China, focused on gathering allies to counter Beijing’s coercive diplomacy around the world and ensuring that China does not gain a permanent advantage in critical technologies.

At first glance, it seems to adopt much of the Trump administration’s conviction that the world’s two biggest powers are veering dangerously toward confrontation, a clear change in tone from the Obama years.

But the emerging strategy more directly repudiates the prevailing view of the last quarter century that deep economic interdependence could be counted on to temper fundamental conflicts on issues like China’s military buildup, its territorial ambitions and human rights.

It focuses anew on competing more aggressively with Beijing on technologies vital to long-term economic and military power, after concluding that President Donald J. Trump’s approach — a mix of expensive tariffs, efforts to ban Huawei and TikTok, and accusations about sending the “China virus” to American shores — had failed to change President Xi Jinping’s course.

The result, as Jake Sullivan, President Biden’s national security adviser, put it during the campaign last year, is an approach that “should put less focus on trying to slow China down and more emphasis on trying to run faster ourselves” through increased government investment in research and technologies like semiconductors, artificial intelligence and energy.

Mr. Sullivan and Secretary of State Antony J. Blinken will road-test the new approach in what promises to be a tense first encounter on Thursday with their Chinese counterparts in Anchorage. It is a meeting they delayed until they could reach the outlines of a common strategy with allies — notably Japan, South Korea, India and Australia — and one they insisted had to take place on American soil.

But it will also be a first demonstration of Beijing’s determination to stand up to the new administration, and a chance for its diplomats to deliver a litany of complaints about Washington’s “evil” interference in China’s affairs, as a Chinese Foreign Ministry spokesman put it on Wednesday.

The United States imposed sanctions on 24 Chinese officials on Wednesday for undermining Hong Kong’s democratic freedoms, an action whose timing was pointed and clearly intentional. Mr. Blinken said in Tokyo this week that “we will push back if necessary when China uses coercion or aggression to get its way.”

And that is happening almost daily, he conceded, including Beijing’s efforts to terminate Hong Kong’s autonomy, intimidate Australia and Taiwan, and move ahead, despite international condemnation, with what Mr. Blinken has said is a “genocide” aimed at China’s Uyghur minority.

It is all part of the initial resetting of the relationship that has marked Mr. Biden’s renewed, if now far more tense, encounters with Mr. Xi.