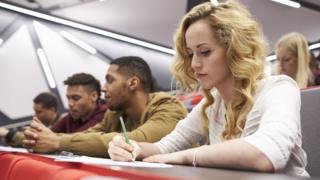 A student who gathered 330,000 signatures calling for a refund of university tuition fees says students are being “completely ignored”.

Sophie Quinn’s petition calls for a refund for teaching lost in the Covid-19 outbreak and lecturers’ strikes.

Her claim was brought before the House of Commons Petitions Committee.

Universities UK told MPs universities were under “severe financial pressure” and paying refunds to students could “put some institutions at risk”.

“Universities are doing all they can to make sure that students achieve the learning outcomes they need,” president Julia Buckingham said.

Ms Quinn told an online session of the committee students were feeling “angry and let down” and had not got what they paid for.

“This whole year has been disrupted by strikes and the coronavirus,” the University of Liverpool student told the committee.

She told MPs students were “frustrated” by:

“As students we feel we have been completely ignored,” she said, calling for a full or partial reimbursement of the tuition fees paid by students in England, Wales and Northern Ireland.

Ms Quinn said it remained unclear how the fees, which are for university services as well as teaching, were being spent this year.

Prof Buckingham said if students had concerns over fees they should pursue complaints through the processes of their universities and then through the independent adjudicator.

But Ms Quinn said as all students were disrupted by the Covid-19 outbreak it did not seem “efficient” or a good use of university resources for every student to put in a separate grievance claim.

UCU lecturers’ union leader Jo Grady said the petition showed students were not happy with “exorbitant fees” and were not “getting what they were told to expect”, while many academic staff on insecure contracts were also vulnerable.

She called for greater clarity on how campuses were meant to safely reopen in the autumn – and said there were discussions about students from some subjects going back in person while others would be taught online.

National Union of Students president Zamzam Ibrahim said students could be getting different levels of quality in their online lessons.

“There is no clear guidance of what adequate teaching looks like,” she said.

Earlier this week, Universities Minister Michelle Donelan said students would still have to pay full tuition fees if universities were teaching online in the autumn term – as long as the quality was good enough.