Universities have been moving to crack down on breaches of coronavirus regulations on campus, but many students who got in touch with the Guardian via a callout said they were struggling with their mental health as a result of university measures.

Since Sam Potter’s first day as a medical student at the University of Birmingham, security guards have patrolled his halls of residence, with an override key allowing them to enter students’ flats if they are suspicious that coronavirus rules are being broken.

“We received an email from the halls saying that if we were caught with more than six people in our flat, the university would be notified and we could be kicked off the course, but it seems to be just intimidation tactics,” he said. 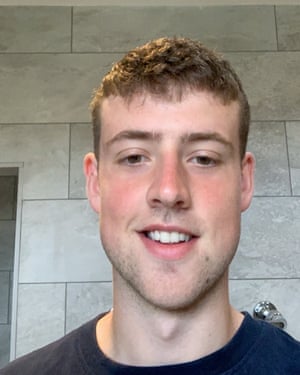 Potter, 20, said he didn’t blame the university for the situation, and understood it “had to enforce” measures, but found it frustrating to be unable to support fellow students who were struggling.

“My friend isn’t close to her flatmates and spends the majority of time doing nothing in her room, alone,” Potter said. “If you want to support someone and give them options, you’d get into trouble.”

“My issue is with the government guidelines,” he added. “It seems like the government hasn’t really thought about the idea of having loads of people from different places and telling them to mix with just five, and making us pay the same price as people who get a standard education. It’s £9,000 to sit and look at a screen.”

Eleanor*, a third-year music student at the same university, is planning to move home after all of her classes were unexpectedly switched online. However, she is still required to pay rent for her term-time address.

“I was told it would be a combination of online and in-person classes, but the night before our second in-person class, I was told our module was being moved online completely,” Eleanor said. “I am now paying almost £500 a month for a room I don’t need. I feel misled and cheated, and it’s too late in the term to find a replacement tenant for my room.”

Tensions among her housemates over coronavirus regulations also contributed to her decision to move home.

“I considered staying, but cases are rising among students and my housemates are going to other universities for visits and not planning to social distance,” she said.

“Many of us think it’s like a prison,” said Carys*, a first-year architecture student at Oxford Brookes University. “You’re stuck in your room all day. I’ve just gone home for a week because I felt like I needed to get out of there, it was too much.”

Carys suffered from depression and anxiety before starting university, but said her mental health problems had got much better before she arrived. At university, she said she could “feel myself slipping”, and decided she needed to go home. Just after she left, police were called to Carys’ flat after her flatmates brought a group of people over.

“It feels like since universities have gone back, students have been blamed for the spread. But when the pubs close at 10, students come out and everyone’s crowded together, then they go back to each others’ flats because there’s nowhere else to go,” she said. Now she is considering dropping out and trying to defer her place to next year.

“I’ve been running and going to the gym a lot, which helps. But I’ve been waking up and lying in bed, thinking: I just want to go back to sleep. Normally I’m up and about and ready to start the day, but the day is just being stuck in my room. I feel like I’m not getting what I’m paying for.”

Less than three weeks after dropping her son off at Northumbria University to start the first year of his degree, Penny Smith returned to take him home.

Smith and her family had become increasingly concerned about their son, whose mental health had deteriorated because of the isolation and anxiety caused by the coronavirus measures in universities. A cyber-attack on the university’s systems meant he wasn’t registered as a student, leaving him unable to access welfare support on online portals, and without any work to do.

“He was anxious from almost day one, to the point where after the first weekend I went and stayed in Newcastle to be a presence in the city, and his father did the same thing the following night,” Smith said.

During his freshers’ week, Smith’s son attended events online, but “nothing that would require him to leave his room”, and he did not receive his timetable.

“We got through to one of his tutors by email, and got a really nice, concerned response, but we just got the impression it was all a bit disorganised,” Smith said. “There don’t seem to be any [non-student] adults on campus other than security.”

Now at home, isolating for 14 days, Smith said her son is unsure whether he will return to university.

“He’s questioning the whole experience,” she said. “We’re all just really disappointed. In my opinion, after the cyber-attack, they shouldn’t have had people on campus. It doesn’t feel safe.”

* Not their real name