Day after day, they went to work.

While white-collar America largely worked from the cocoons of their homes, these workers left for jobs elsewhere. Most had no choice.

For many workers around the country, the Delta variant’s surge this summer upended long-awaited plans to return to the office this fall. But millions more — including nurses, cashiers, restaurant and grocery workers, delivery drivers, factory workers, janitors and housekeepers — never worked from home in the first place.

“They’re the people who often are working around the public, often working in jobs that are requiring them to be at particular risk from the virus,” said Eliza Forsythe, an economist at the University of Illinois. “All of these types of jobs where you’re not sitting at a computer — that’s what’s really been the backbone for allowing the rest of the economy to go remote.”

More than a year and a half after the pandemic disrupted nearly all aspects of everyday life, one of the starkest economic divides to emerge has been between workers who can work from home and those who cannot.

We asked six never-remote workers about their experiences and they shared their stories below.

Just 35 percent of Americans — fewer than 50 million people out of 137 million — worked from home at some point in May 2020 because of the pandemic, when remote work was at its peak, according to the Bureau of Labor Statistics.

Those who could not work from home were employed in a wide array of industries, including health care, agriculture, leisure and hospitality, retail, transportation, construction and manufacturing. Many were considered part of the army of frontline and essential workers, with jobs that were considered so critical that they could not be put on hold even during a public health crisis. They were typically lower-wage, less educated and disproportionately people of color.

During a time when millions of Americans lost their jobs, a portion of these workers — those who worked throughout the pandemic or who were only unable to work in the early days of the virus — could be considered relatively lucky.

At the same time, many of these never-remote workers could not afford, or did not have the necessary skills, to find other jobs despite the fear of contagion. And a large share also lost their jobs completely, in part because they were unable to work remotely when their businesses temporarily or permanently closed during the pandemic. Many of these workers had jobs in the service industry.

Perhaps most importantly, the pandemic has shed more light on how grueling and thankless many of these never-remote jobs are — a parallel universe of work in which millions of employees did not have the luxury of thinking about returning to the office at all.

(The workers’ interviews have been edited for length and clarity.) 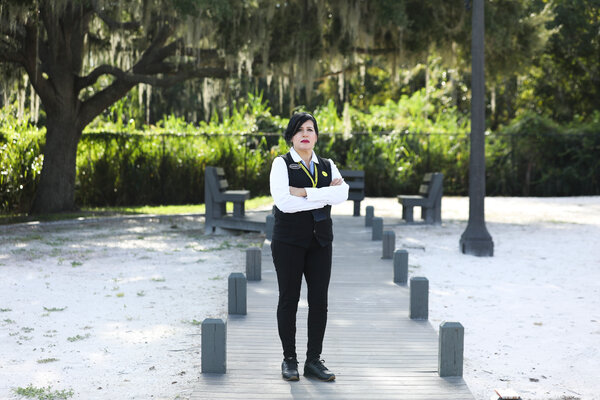 So many didn’t come back to work. People are afraid to work at the airport. We push more than one wheelchair at the same time because we don’t have manpower. Sometimes for international flights, we have 17 wheelchairs and only two of us. We take them through security and run to get the others. People miss flights. People cry. We’re constantly apologizing.

I was recently hurt from pushing too many wheelchairs. My whole arm felt like needles and pounding. The doctor said I had a tear. I was off for two weeks. I didn’t get paid for that.

I earn $7.58 an hour plus tips. You don’t get sick pay. You don’t get vacation pay. There’s no retirement pay. There are other people who are injured and still pushing chairs. There’s people with back ulcers and shoulder pain. Co-workers are getting sick. I tell them, “Go home.” But they don’t. They rely on the tips to survive.

Even though I’m going through this, I don’t feel safe getting another job out there. If there’s another breakout, we’ll feel safer at the airport. This is the only place that kept on going because they needed to move people around — people who were sick, doctors, lawyers. We needed to keep the airport open.

At first, I didn’t know how serious the virus was. I mean, I protected myself, but I didn’t pay that much attention to it until my sister got Covid. It was Dec. 27.

She had the symptoms. She’s 75. She decided to go to the emergency room so she took a shower and then, all of a sudden, she collapsed. She hurt her back. She’s been paralyzed since.

She’s in a nursing home now. I used to go and see her from the window and we would talk on the phone. She would tell me what she wants and I would bring it. She likes to eat Cape Verdean food.

Every time I think about it, I cry. Then I wipe my tears, put my mask on and go to work.

I clock in. I put all the trash outside. After I disinfect the bathroom, I vacuum the lobby. As long as it’s not that many cases on campus, I feel pretty good about it.

But if it goes up, that’s when the fear comes. I panic. I lose sleep. When I think about my sister, that could be me. I am out all the time, doing the work.

I was jobless from March 15 to August of 2020, and I had $200 left in my bank account. And some friends of mine opened a restaurant and they offered me a serving position there. I was the only server. And I thought ‘Oh my god, this was a godsend.’ Like, I had no idea what I was going to do. I’m down to $200 in my bank, no options. I didn’t really want to go back into the service industry but this was the only opportunity that presented itself.

I went back, and things were starting to look up and go well. And I started making money again and people were loving this food and we were really quickly building a name for ourselves. And in October, all three of us got Covid so we had to shut down for I think it was just over six weeks.

The husband-and-wife chef team — they got Covid really bad. Their symptoms were pretty severe. And for me, I just had a terrible headache, a very slight cough and severe exhaustion for about three days, and then I bounced right back. And they were unsure how long it was going to take them to reopen.

So during that time, I decided ‘Well, I can’t be jobless again for an indefinite period of time. I have to look for something else.’ So I applied at a local homeless shelter and I got a job there.

When the pandemic began, the number of people we saw in the offices, it almost dropped to half. It created panic. Many of us would have loved to work from home, but sadly, because we are cleaning people, how can we?

One employee from our group got sick and died. I felt sad. We were a team, you know? We talked about baseball, basketball, about the countries we came from.

This is the country that chose us. If in a moment of crisis, we got to choose between the things we like and the things we don’t like, what’s the contribution we are making? We have all done the essential work required — we have all contributed our grain of sand.

We didn’t stop working. I arrive at 6 in the morning. We take out the trash. We are always disinfecting. We always use masks.

My youngest daughter studied from home because her university was closed. She was watching over me. When I came back from work, she was all over me: Did you wash your hands? Take off your clothes! Take a shower right now! My other daughter called all the time.

I would tell them, ‘Remember that everybody who was born has to die, so calm down.’ They laughed. If you get more stressed, you’ll die faster. So, you better laugh.

I don’t want people to be treated the same way that I have been and to feel that loneliness and fear that I felt.

I started working at a major pet store in late September last year. I made $10.50 an hour. For the first five months of my job, I was just a cashier. One day, a tall, bulky man leaned around my Plexiglas shield and purposely coughed. I think we were out of the dog food that he needed or something.

My brother passed on May 22. He was my little buddy. He had a stroke that crushed his brain stem. He couldn’t keep going, so we decided it would be best if we took him off life support. My manager was not empathetic or compassionate. She even told me to just get over it, that my feelings from home didn’t transfer over to work. It was traumatic. I was not comfortable working in that store anymore. I transferred in mid-June.

My new store is short staffed. We’re all being wrung dry. You’ll be trying to unload inventory from a truck shipment and then there will be someone needing fish or four different phone calls. Sometimes someone will forget to give the birds more millet.

I’m worried about the weather getting cold again, if the cases will spike and whether my family and co-workers will be safe. I’ve already had one loss this year.

More people would have preferred to stay home or work from home. If I had that opportunity, I would have, most definitely.

I caught Covid at the end of March. I was not feeling well. My mom was in a nursing home. I called her on April 6 and told her that my birthday was soon. I told her, “I’m coming to break you out of the house.” She laughed. On April 8, the nursing home called me and told me she was taken to the hospital. A week later she passed away due to Covid.

I ended up using two weeks of vacation days, all of my sick days and they gave me my three days for bereavement. There was no time to even deal with the fact that I lost my mom while I was dealing with Covid myself.

The first day going back to work was scary. I’m still scared. It’s very crowded now. I try to stay six feet apart. If someone asks me a question, I try to keep them at a distance.