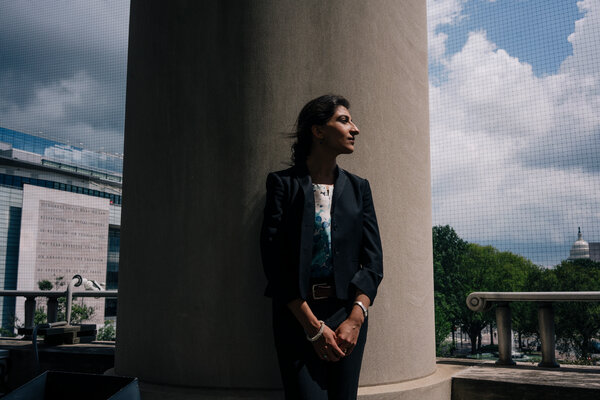 A muscular approach to antitrust emerges

Word that the White House plans to pick Lina Khan, a Columbia Law professor whose research has spurred a rethinking of competition law, for a seat on the Federal Trade Commission has Washington and business types speculating that the Biden administration is preparing to get tough on antitrust. (She would need to be confirmed by the Senate.)

Ms. Khan first shot to fame with a paper she wrote in law school, accusing Amazon of abusing its monopoly power. Having previously worked at the anti-monopolist nonprofit Open Markets Institute, she has since become a leader in the progressive movement known as “hipster antitrust.” That movement calls for new ways of reviewing companies’ market control, including how that affects people’s roles as citizens, workers and community members in addition to being consumers.

She recently helped lead the House’s bipartisan investigation into competition in digital markets, as tech giants have become a big focus of lawmakers and regulators. She also served as a legal adviser to Rohit Chopra, an F.T.C. commissioner who has been nominated to lead the Consumer Financial Protection Bureau.

Proponents of Ms. Khan praised the prospect of her nomination:

“Lina is the excellent and obvious choice for this moment,” Sarah Miller, the head of the nonprofit American Economic Liberties Project, told DealBook. She added that Ms. Khan’s scholarship had challenged “antitrust orthodoxy,” making her potential addition to the F.T.C. a big opportunity for bolder thinking.

Zephyr Teachout, a Fordham Law professor who supports tough antitrust policies, said that Ms. Khan — and her Columbia Law colleague, Tim Wu, who was recently named to the National Economic Council — were “two extraordinary, powerful choices” that give “hope that the last 40 years of consumer welfarism in antitrust could be on its last legs.”

Skeptics are worried, however. “If these reports are true, it is deeply concerning,” said Senator Mike Lee, Republican of Utah and the ranking member of the Senate antitrust subcommittee. He called her antitrust views “wildly out of step with a prudent approach to the law” and said that her nomination would signal intent from the Biden administration to “put ideology and politics ahead of competent antitrust enforcement.”

One concern expressed by both Mr. Lee and, privately, other Democrats is over whether Ms. Khan is being elevated too quickly. (She is in her early 30s.) A former Democratic antitrust official told DealBook that the Biden administration should seek balance by picking someone with more litigation experience for the remaining F.T.C. seat.

One big question around Washington is about regulatory balance. With two advocates for strong antitrust policies potentially joining the Biden administration, DealBook hears that some antitrust practitioners are speculating about whether the White House will pick a more moderate candidate to lead the Justice Department’s antitrust division.

But the former Democratic antitrust official told DealBook that the selection of Ms. Khan and Mr. Wu suggests that the White House may be favoring a team of tough antitrust regulators.

A “relief rally” for tech stocks. Shares in companies like Apple and Tesla bounced back yesterday after weeks of declines, pushing the Nasdaq out of correction territory. But skeptics said the gains might be fleeting as short sellers who were betting against tech stocks covered their bets.

Payment for order flow comes under greater scrutiny. The practice, in which online brokers like Robinhood sell customer orders to financial firms to be completed, should be examined closely, the S.E.C.’s acting chairwoman wrote in a letter that was made public yesterday. Payment for order flow was also a focus of a Senate Banking Committee hearing yesterday on the meme-stock frenzy.

Goldman Sachs pledges to invest $10 billion in businesses owned by Black women. The 10-year commitment is part of the firm’s new One Million Black Women program, which the bank says is meant to improve at least one million lives over the long term.

Roblox will begin trading today in a direct listing. The video game platform, which is popular with children, set its reference share price last night at $45, putting its likely market cap at $30 billion. Roblox decided to pursue a direct listing, in which it will make its existing shares publicly tradable, after calling off plans for a traditional I.P.O. in December.

Citigroup punishes investors that kept mistakenly wired payments. Companies that hung onto $500 million that Citi accidentally sent to Revlon creditors are reportedly blocked from some debt deals that the bank is overseeing, Bloomberg reports. A court ruled last month that Citi could not force those firms to give back the money.

Exclusive: The Teamsters take on a big convenience store deal

Months into a contract dispute with Marathon Petroleum, the Teamsters union is objecting to the company’s $21 billion deal to sell its Speedway convenience store business to the owner of 7-Eleven, DealBook is the first to report. Its effort is in part a bet on the Biden administration being tougher on antitrust and more favorable toward unions — and pits the union against Elliott Management, the huge hedge fund that helped make the proposed sale possible.

The Teamsters asked the F.T.C. to pause review of the deal. In a letter sent today to the agency’s acting chairwoman, Rebecca Slaughter, the union requested that the agency wait for one of two things:

Congress passes a bill by Senator Amy Klobuchar, Democrat of Minnesota, that would make broad changes to antitrust rules. The legislation would change the framework used by the F.T.C. to evaluate the deal, allowing the regulator to reject transactions based on the possibility of competitive harm instead of a determination that it will create such harm.

Or, at the least until the agency ensures “that all competitive effects from the transaction have been fully considered and remedied.”

There are other issues at play. Marathon has locked out 200 union workers at a refinery in Minnesota. And unions have had an often tense relationship with activist hedge funds like Elliott, whom they have accused of calling for layoffs that affect union members. (In its letter to the F.T.C., the Teamsters union criticized what it called “Elliott’s singular desire to liquidate Marathon’s assets to fund enormous share buybacks and special dividends.”)

But the agency is already far along in its review. Marathon executives, who hope to close the deal by the end of the first quarter, confirmed on a call with analysts last month that they had responded to a second request for information from the F.T.C. and were working on solutions. (The proposed buyer of Speedway, Seven and I, is reportedly looking to sell up to 300 gas stations to ease the agency’s concerns.)

The F.T.C. must follow statutory timelines for reviewing deals, which means the agency can delay its examination only for so long, even if it wanted to. And it’s not clear whether Ms. Klobuchar’s bill will pass, or in what form it might do so.

“It’s taken me 27 years to become an overnight sensation.”

— David Nussbaum, the investment banker who co-created the SPAC in 1993, on how his financial innovation has become a hot trend on Wall Street

The year of corporate transparency

Companies are increasingly under public pressure to be more open, with political spending getting particular attention since the Jan. 6 riot at the Capitol. Proponents of greater transparency say that demand is growing: “The disclosure train will be leaving the station,” Bruce Freed, the president of the nonprofit Center for Political Accountability, told DealBook.

The SEC is all about E.S.G. Transparency around political giving is considered a governance issue. Last week, the Securities and Exchange Commission said it would form a task force focused on issues around climate and environmental, social and governance concerns, making both priorities for its examinations division. And corporate disclosures — particularly around political spending — were a recurring theme in the testimony of Gary Gensler, President Biden’s pick to lead the S.E.C., in his Senate confirmation hearing.

This year “is going to be really transformative,” said Josh Levin, the C.E.O. of the investment platform OpenInvest, which lets financial advisers adjust client portfolios based on companies’ openness on political spending. The platform uses an annual ranking of S&P 500 companies based on their politics and lobbying disclosure policies.

Concerns about political donations already top investors’ E.S.G. proposals, according to new research from Roberto Tallarita, an associate director of Harvard Law’s corporate governance program. Among the findings from his survey of shareholder public interest proposals from 2010 to 2019:

Political spending initiatives made up 16 percent of all shareholder efforts, and on average drew support from 28 percent of companies’ investors, the highest level for such proposals.

Companies sought S.E.C. permission to exclude only 19 percent of political spending proposals, compared with 37 percent of climate change initiatives and 57 percent of animal welfare ones.

That suggests that demands for transparency on political spending are becoming mainstream and are generally accepted by management teams and the S.E.C. as a legitimate issue. “If the S.E.C. mandates disclosure of political spending, as it might, it will be in large part, as Gensler made clear in his confirmation hearing, thanks to the constant pressure from investors,” Mr. Tallarita said.

Coupang, the South Korean e-commerce giant backed by SoftBank, raised the top end of its I.P.O. price rage to $34 a share, potentially valuing the company at more than $58 billion. (Reuters)

Apollo Global Management’s talks to buy parts of Greensill, the embattled British lender, have reportedly stalled over a dispute with a key tech providers. (Bloomberg)

General Electric agreed to sell its aircraft-leasing business to AerCap Holdings in a cash-and-stock deal valued at $30 billion. The transaction would effectively wind down the conglomerate’s GE Capital unit. (WSJ)

Sarah-Marie Martin, most recently a partner in Goldman Sachs’s financial and strategic investors group, is the latest to leave the bank. She’ll become the C.F.O. of Yumi, a baby-food start-up co-founded by a DealBook alumna, Evelyn Rusli.

The House passed a bill that would drastically expand labor rights, including more protections for union-organization efforts, but the bill faces slim chances of Senate approval. (NYT)

The publisher of Gov. Andrew Cuomo’s book on leadership has halted sales of the title, citing investigations into New York State’s handling of nursing home deaths during the pandemic. (NYT)

A complete repeal of a legal shield for tech companies from user-posted content on their platforms looks increasingly unlikely — but Congress is studying more specific changes to the law. (NYT)

The Chinese internet giant Tencent reportedly had about $120 billion in paper gains last year on its investments in over 100 companies. (The Information)

How the pandemic has roiled New York City’s economy, in pictures. (NYT)

The growing rift between Prince Harry and Meghan and the British royal family is a lot like a workplace dispute — only with tabloid headlines and an Oprah Winfrey interview. (NYT)

Two House Republicans want a hearing on court-appointed conservatorships — and cited the movement to free Britney Spears from her conservatorship. (Insider)

We’d like your feedback! Please email thoughts and suggestions to [email protected]