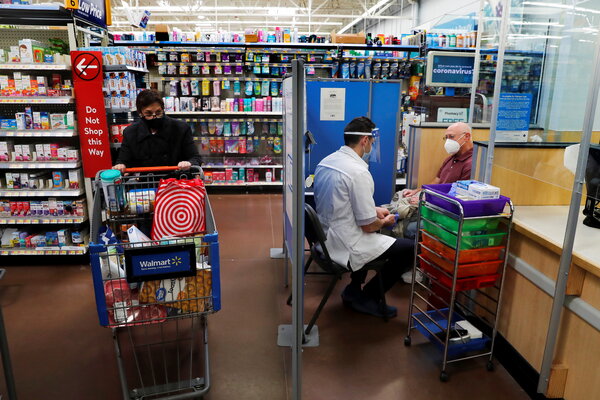 A class divide on vaccines

The tide has begun to turn on corporate vaccine mandates, with companies including Disney, Facebook, Google and Walmart recently introducing stricter requirements for employees returning to the workplace. But the policies come with some important caveats as executives juggle public health, labor relations and the bottom line.

Walmart’s vaccination mandate doesn’t cover the company’s most vulnerable employees: workers at its stores and warehouses. The retailer, the biggest private employer in the U.S., announced mandatory inoculation for employees at its headquarters and for managers who travel domestically. For a sense of scale, about 17,000 of Walmart’s 1.6 million employees work at its headquarters. For workers who fall outside the requirement, Walmart is doubling its cash incentive to get immunized, to $150.

Unions and labor shortages complicate the picture. One fear that companies have with broad vaccine mandates is that they could drive away employees at a time when workers are already in short supply, especially in industries like retail and restaurants. (At the same time, not requiring vaccines may make other groups of workers anxious and more likely to quit.) Negotiating mandates with unions, which are themselves mixed on the issue, adds complexity.

So far, with the exception of health care, corporate vaccine mandates tend to cover the white-collar workers who executives want back in the office, not the lower-income workers on the front lines who are less likely to be vaccinated.

Bridging the divide. “If you look at the divide of who is not vaccinated, it is people of lower income, it is people who are less likely to be insured, it is people in the states that reflect the politicization of the pandemic,” said Dr. Kirsten Bibbins-Domingo, vice dean for population health and health equity at the University of California, San Francisco. Companies that adopt partial mandates that “further widen” that gap, she said, would “only go so far” in achieving what the vaccination drives are meant to accomplish.

Senators put the finishing touches on an infrastructure bill. After working all weekend on the $1 trillion bipartisan legislation, which runs to more than 2,700 pages, they predict a vote in the chamber this week. Some progressive Democrats in the House could hold up passage of the bill by saying their support is linked to a $3.5 trillion budget package.

China’s securities regulator calls for cooperation with its U.S. counterpart. The request came after the S.E.C. said that Chinese companies listing in the U.S. would have to disclose the risk of government interference. Officials in Beijing promised to “engage closely” with investors, who are on edge after a crackdown on Chinese companies with foreign listings.

Goldman Sachs is the latest institution to raise junior bankers’ wages. The Wall Street giant pushed up base pay for its youngest investment bankers, according to Insider, after rivals like JPMorgan and Morgan Stanley made starting packages more generous amid fears of burnout and the lure of tech and other industries.

The White House enlists an army of TikTok stars to promote Covid vaccines. The Biden administration hopes the 50 social media influencers can fight misinformation online. But they may be no match for those who have made it their personal mission to question the shots.

Zoom settles a “Zoombombing” lawsuit. The videoconferencing company that became a mainstay of pandemic life agreed to pay $85 million to settle charges that it shared data with third-party services and allowed hackers to interrupt meetings. If the deal is approved by a judge, Zoom subscribers would be eligible for partial refunds.

Square is the latest tech company to take advantage of its soaring stock price to make a splashy bet. Yesterday, the company announced its biggest deal yet: a $29 billion, all-stock move for the Australian “buy now pay later” service Afterpay.

“Buy now pay later” is the next-generation version of layaway. Installment plans were traditionally for low-income people, but the latest iteration serves online shoppers who may simply have a distrust of credit, a remnant of the 2008 financial crisis. (Consumer advocates have said that the potential risks of the nascent service are not yet fully understood.) The industry has benefited from the pandemic boom in e-commerce, and could cover as much as $1 trillion in payment volume in a few years. Other players in the fast-growing sector include Affirm, Klarna, QuadPay and Sezzle.

Square will integrate Afterpay into its platforms for consumers and small businesses, pitching the deal as a way to take on traditional banks. Square reported a 177 percent rise in revenue from its Cash App in its latest quarter, bolstered by the shift to cash-free transactions, and its shares are up more than 80 percent this year.

Fintech deals aren’t a sure thing lately. Visa and Plaid called off their $5.3 billion tie-up after the Justice Department sued to block it, and the Biden administration has pledged to take a tough stance on corporate consolidation. Square’s deal still needs shareholder and regulatory approval. When asked about potential antitrust concerns, Amrita Ahuja, Square’s C.F.O., said the “buy now, pay later” industry was still “highly competitive.”

“I think what we will see on Monday is a drastic increase in eviction notices going out to people, and the vast majority won’t go through the court process.”

— Bailey Bortolin, a tenants’ lawyer in Nevada, told The Times about the likely outcome of the end of a federal eviction moratorium this weekend. The backlog of cases could clog the courts, prompting renters to vacate their apartments instead of fighting it out.

Jay Powell, the Fed chair, is under pressure to do something about property prices. He faces a tricky calculus in deciding whether to cool off the hot housing market, The Times’s Jeanna Smialek writes.

Prices are rising at their fastest pace in 30 years, but haven’t reached bubble territory. At the height of the subprime bubble, the price-to-rent multiple for the housing market, as calculated by the U.C.L.A. economist Edward Leamer, was 41. It’s currently at 29, and at least some of what’s pushing up prices is temporary supply issues.

For most Americans, a home is their single biggest asset. Rising prices raise important affordability issues, but in general, higher prices make for a more financially stable middle class.

The Fed may not have the power to deflate the market without doing broader economic damage. The Fed might be able to hold down housing prices by raising interest rates, but a potential drop in employment if the economy slows won’t necessarily make housing more affordable.

“For now, your local housing market boom is probably going to be left to its own devices,” Jeanna writes, “meaning that while first time home buyers may end up paying more, they will also have an easier time financing it.”

▶︎ A global chip shortage eats into profits. General Motors reports its earnings on Wednesday, and analysts will be watching for how the semiconductor shortage is affecting its business. Like other automakers, G.M. has been forced to halt or slow production, and that has hampered its ability to take advantage of booming demand.

▶︎ Companies tweak their back-to-office schedule. Shifting guidance on masks and rising concerts about the Delta variant have thrown a wrench into companies’ plans. Expect more companies to alter their schedules for returning to workplace and toughen their requirements for vaccinations and testing.

▶︎ New job numbers arrive. On Friday, the Labor Department will release data that will show whether a hiring burst in June continued in July. Economists will also learn whether the reopening of the economy is drawing back the millions of workers who left the labor force during the pandemic.

The crypto token known as ICP, tied to a project supported by prestigious investors, was introduced in May and has generated buzz, controversy and a lawsuit. In a proposed class action in California, aggrieved ICP investors are raising one of crypto’s fundamental questions: When is a token a commodity, like oil or gold, and when is it a security, subject to the stricter legal requirements of stocks?

Not all cryptocurrencies are created equal. Bitcoin is mined algorithmically and there is no central ownership, so it’s considered a commodity for regulatory purposes. But if a crypto token represents an investment contract — a stake in a project that raises an expectation of profits from a central entity’s efforts — it may be a security. The S.E.C. sued Ripple last year, saying that its token, XRP, was an unregistered security. The pending enforcement case is considered an industry litmus test.

“The S.E.C. has limited bandwidth,” said David Scott, a lawyer for the aggrieved ICP investors. He said that private litigation could “bring integrity to the market.”

The Dfinity Foundation mints ICP. The tokens support Dfinity’s Internet Computer platform, which hosts other blockchain projects and has high-profile backers such as Andreessen Horowitz and Polychain Capital. Shortly after its introduction, ICP’s value soared to the tens of billions of dollars but then suddenly tanked. Retail investors complained that Dfinity had made claiming their tokens difficult while insiders had profited. The lawsuit argues that Dfinity and its backers violated securities laws.

A spokesman for Dfinity said that the suit was “baseless” and that ICP was not a security, describing it as a “source of fuel that powers computation.” Andreessen and Polychain did not respond to requests for comment.

Discovery is reportedly holding discussions about a potential takeover bid for the British broadcaster Channel 4. (Reuters)

The delivery start-up Gopuff raised $1 billion from Blackstone, SoftBank and other investors, at a $15 billion valuation. (CNBC)

The crypto industry is pushing against a tax provision in the infrastructure bill that is intended to raise about $30 billion from the industry. (NYT)

New research shows how U.S. traders circumvent bans on trading derivatives on offshore platforms. Binance, the largest exchange, is winding down derivatives in several European countries, and was ordered to block access to its site in Malaysia. (WSJ, Bloomberg)

Covid has made the chief medical officer a C-suite fixture. (Bloomberg Businessweek)

The death of Scholastic’s leader is creating a succession battle at the publisher of the “Harry Potter” books. (WSJ)

“Why Bond Funds May Be Riskier Than They Seem” (FT)

Loafers and polos are in, heels and ties are out: A lookbook of Wall Street’s more relaxed return-to-work attire. (NYT)

We’d like your feedback. Please email thoughts and suggestions to [email protected]