The stock market has never seen anything quite like Tesla.

Led by the mercurial celebrity billionaire Elon Musk, the electric-car maker’s shares have soared roughly 14,000 percent since it went public a decade ago. Even amid an economy-roiling pandemic it’s up roughly 700 percent this year.

And now, a company that has provoked years of equally intense fandom and criticism among money managers and tech bros the world over is being added to the S&P 500 — traditionally a marker of corporate maturity.

In this, too, the stock market has never seen anything like Tesla: On Monday, the company will be the largest ever added to the index, and, with a market capitalization of $650 billion, the sudden weight it will throw into the market could have strange consequences.

“This is by far the biggest index inclusion that they’ve ever attempted,” said Steve Sosnick, chief strategist at Interactive Brokers in Greenwich, Conn. “The stock will immediately be a top 10 name in the S&P, which is nuts.”

Companies worth a fraction of Tesla would have been included in the index long ago, but the approach that has made it such a valuable company has brought challenges. Despite all its technological innovations, Mr. Musk’s celebrity billionaire aura and a high-risk, high-reward approach to business, Tesla for the longest time was unable to meet the most humdrum requirement of corporate America: turning a profit. Criteria for inclusion require the sum of the company’s fully audited profits in the four most recent quarters to be positive. Tesla hit that mark only this year.

Tesla was never short on ambition, though. From the beginning, it proposed to compete directly with the world’s biggest automakers by slowly rolling out a lineup of all-electric vehicles at a time the technology seemed impractical. General Motors’s electric EV1 had gone the way of the dinosaur a decade earlier, and Tesla’s plan seemed wildly unrealistic for a start-up that wanted to compete with Detroit. 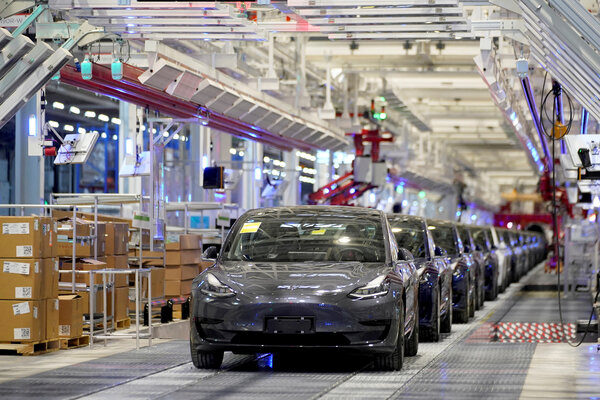 But the messianic mystique of Mr. Musk, a chief executive/hype man in the vein of Apple’s Steve Jobs, was alluring. He sold a vision that gave Tesla an endless appetite for investor cash, and pockets both deep and shallow bought it: Over the years, the company pulled in capital from venture capitalists, bond markets and stock investors, and inspired a wave of casual investors once it went public.

Even as Tesla struggled to produce and sell enough vehicles to sustain itself, its stock price was the subject of endless fascination and debate. Mr. Musk has feuded with skeptics on Twitter — he has often railed against the so-called shorts who bet that Tesla’s shares would fall — and in 2018, he casually tweeted that he planned to take Tesla private at a price of $420 a share. The next week, he gave an interview to The New York Times in which he acknowledged that he was fraying, his physical health suffering as he tried to met the production goals he’d set for the company, a longstanding challenge for the growing company.

Chris Mack, a stock portfolio manager at the investment adviser Harding Loevner in Bridgewater, N.J., has plenty of good things to say about Tesla as an innovative company. But he doesn’t own the shares in his funds, which is focused on buying large cap technology companies that have a proven track record of profitability, making them suitable for long-term holdings.

“We struggle with the quality of it,” Mr. Mack said of Tesla.

But many investors won’t actually have a choice about buying Tesla’s shares.

The S&P 500 is one of the most widely followed barometers of the American stock market, serving as the benchmark against which investors measure more than $11 trillion worth of investments. Of that, more than $4.5 trillion are in index funds designed to mirror the stocks in the S&P.

Those funds have been buying up shares of Tesla since mid-November in preparation for Tesla’s admission to the S&P 500, which has sent its shares up over 60 percent since the announcement that the company would be included.

S&P Dow Jones Indices, which owns the index, considered phasing Tesla in to make it easier for index funds to add the shares they need. The prospect of large amounts of the investing public having to buy large amounts of a single stock all at once can introduce volatility into a share price, if it’s not sufficiently liquid. But the company decided there would be enough available to do it all at once.

Because of its size — it’s roughly $100 billion larger than Warren Buffett’s Berkshire Hathaway — Tesla will immediately be one of the most influential stocks in the index, which is weighted by market capitalization adjusted for the number of shares available to be traded.

Although smaller than the biggest tech companies — Microsoft, Apple, Amazon, Alphabet and Facebook, which are together worth trillions of dollars and account for more than 20 percent of the index — Tesla is widely expected to account for about 1.5 percent.

“Tesla is a grabber as far as headlines go, and it’s going to have an impact in the pricing” of the index, said Howard Silverblatt, senior index analyst for S&P Dow Jones Indices.

And Tesla moves around a lot.

On Feb. 3, Tesla rocketed up nearly 20 percent on a relatively minor update about a joint venture on batteries turning a profit. A couple of days later, the stock took a 17 percent nosedive when a Tesla executive said the coronavirus outbreak, then centered in China, would hamper delivery of vehicles from its plant in Shanghai. In August alone, Tesla rose nearly 75 percent — buttressed by strong numbers on vehicle deliveries — only to collapse by more than 30 percent in the opening days of September.

There are different theories about why Tesla moves so dramatically. Financial academics would note the extremely high valuations investors are putting on profits they expect Tesla to earn far in the future. Betting on such far-off events gives added weight to relatively minor updates that could, over time, amount to big changes to the company’s profitability. More hard-boiled market observers point to the army of individual investors who hold Tesla shares — and may be more prone to buying and selling on the latest headlines.

Over the last five years, Tesla has been roughly 60 percent more volatile than the S&P 500, according to Bloomberg data. And its choppiness has grown to be almost 90 percent more than the market’s volatility this year.

There’s reason to believe that Tesla will remain volatile, at least in the short term. Some of the company’s gains this year are a result of bets investors placed that Tesla would enter the S&P 500 and the index funds would be forced to buy it.

In a research note this month, analysts at JPMorgan suggested they believed the price could come down once Tesla was included in the index. They recommended that investors who want to add Tesla hold off from buying right away.

“Tesla shares are in our view and by virtually every conventional metric not only overvalued, but dramatically so,” they wrote.

But there’s reason to believe that Tesla will start to behave a little more predictably.

For decades, academics have studied the behavior of stocks that are added to and pulled out of major indexes such as the S&P 500, uncovering a number of notable tendencies they attributed to the so-called index inclusion phenomenon.

Some studies have found that stocks tend to become more like the index they’re added to, with share prices moving more in lock step with the overall index. That makes sense: Inclusion in the S&P 500 changes the nature of a company’s shareholder base. After Tesla is added, roughly 17 percent of its tradable shares will be owned by investors who merely own them because they are in the index, according to analysis from Morgan Stanley.

These passive investors don’t make decisions based on how an individual company is performing. Instead, they buy and sell all 500 stocks in the index as a group, depending on whether money is flowing into their funds or out of them. Over time, this can mean the shares of companies in the index tend to move more as a group.

“As the stock gets included, its volatility goes down,” said Anna Pavlova, a professor of finance at the London Business School who has studied index inclusions. “That’s the dominant effect.”