In a letter, 21 officials asked the Treasury secretary, Janet L. Yellen, to clarify how expansively her department would interpret a portion of the law. 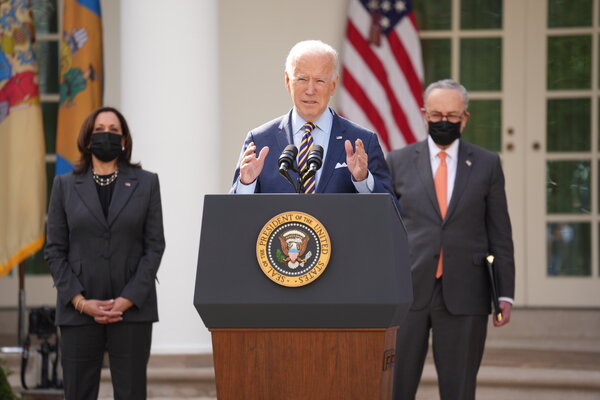 WASHINGTON — Twenty-one Republican attorneys general pressed the Biden administration on Tuesday to clarify a provision in the $1.9 trillion economic aid package that the president signed into law last week, warning that its restrictions on state efforts to cut taxes could be “the greatest attempted invasion of state sovereignty by Congress in the history of our Republic.”

The seven-page letter was signed by a host of Republican officials, including the attorneys general of Texas, Arizona, Georgia and Utah. They take issue with a restriction that lawmakers included in a $350 billion relief effort for state, local and tribal governments that prevents them from using the federal funds “to either directly or indirectly offset a reduction in the net tax revenue” as a result of tax cuts. These governments have suffered revenue hits and laid off more than a million public employees during the coronavirus pandemic.

The law requires repayment to the federal government of any money that violates those conditions.

In their letter, the Republican officials asked Janet L. Yellen, the Treasury secretary, to clarify how expansively her department would interpret that portion of the law. Does it simply prohibit states from using the federal dollars to offset new tax cuts, or instead prohibit them from cutting taxes for any reason, even if those cuts were in the works before the law passed? The officials said the broader restriction would be damaging and most likely unconstitutional.

“This language could be read to deny states the ability to cut taxes in any manner whatsoever — even if they would have provided such tax relief with or without the prospect of Covid-19 relief funds,” the attorneys general wrote. “Absent a more sensible interpretation from your department, this provision would amount to an unprecedented and unconstitutional intrusion on the separate sovereignty of the states through federal usurpation of essentially one half of the state’s fiscal ledgers” — their ability to collect revenues.

Oklahoma, for example, has already passed an income-tax cut through its House of Representatives, including an expansion of the state’s earned-income tax credit that is meant to help low-income workers, Mike Hunter, the state’s attorney general, said in a statement on Tuesday. “But,” he warned, “the federal stimulus bill might prohibit Oklahoma from providing this economic relief without losing its share of federal funding.”

A White House spokesman declined on Tuesday evening to comment on the letter. A Treasury Department spokesman did not immediately return a request for comment.

Republican lawmakers in Washington and around the country previously raised concerns over the provision.

“We were planning on giving — reducing the sales tax on used cars, that is low-income and middle-income,” Gov. Asa Hutchinson of Arkansas said on the CBS program “Face the Nation” on Sunday. “And now we’re worried about whether that’s going to be prohibited under this bill. The language seems to indicate it is.”