WASHINGTON — The most probable cause of a series of mysterious afflictions that sickened American spies and diplomats abroad in the past several years was radiofrequency energy, a type of radiation that includes microwaves, the National Academies of Sciences, Engineering, and Medicine has concluded in a report.

The conclusion by a committee of 19 experts in medicine and other fields cited “directed, pulsed radiofrequency energy” as “the most plausible mechanism” to explain the illness, which came to be known as Havana syndrome, though they said secondary factors may have contributed to symptoms, according to a copy of the report obtained by The New York Times.

The report, which was commissioned by the State Department, provides the most definitive explanation yet of the strange illness that struck scores of government employees, first at the U.S. Embassy in Havana in 2016, and subsequently in China and other countries. Many of the officers suffered from dizziness, fatigue, headaches, and loss of hearing, memory and balance, and some were forced into permanent retirement.

C.I.A. officers visiting overseas stations also experienced similar symptoms, The Times and GQ magazine reported in October. The officers were traveling to discuss countering Russia covert operations with foreign intelligence agencies, a fact that adds to suspicions that Moscow is behind the episodes.

Though couched in careful, scientific language, the new report reveals strong evidence that the incidents were the result of a malicious attack. It attributes the illnesses to “directed” and “pulsed” — rather than “continuous” — energy, implying that the victims’ exposure was targeted and deliberate, and not, for example, the result of a leaky electronic device.

It also said the committee found the immediate symptoms that patients reported — including strange sensations of pain, pressure and sound that often appeared to emanate from a particular direction, or occurred in a specific spot in a room — were more consistent with a directed “attack” of radiofrequency energy.

The committee considered other causes, like chemical exposures and infectious diseases, but ruled them out as unlikely.

The report said that the variability of the incidents, which appeared to affect different people in different ways, left open the possible influence of “psychological and social factors.” And it said that some of the victims may be experiencing a condition called “persistent postural-perceptual dizziness,” a nervous system disorder that produces a prolonged feeling of vertigo or unsteadiness.

The episodes have been the subject of much speculation and controversy. Many of the victims, as well as some government officials and outside scientists, have long argued that radiofrequency energy was the most likely cause, potentially the result of a weapon wielded by a foreign power.

But since 2018, the U.S. government has declined to speculate publicly on the cases, and some scientists have promoted alternate theories, like a kind of psychological illness that spread in the stressful environment of foreign missions.

Amid the controversy and confusion, some of the afflicted officers have complained that the United States has failed to support them. In several cases, the government initially refused to grant leave and provide the necessary medical care for officers who said they were affected, the officers said. And with the government silent on the possibility of a foreign attack, many of the victims were left feeling that the public believed they had made it all up.

Several of the victims have accused Secretary of State Mike Pompeo and other Trump administration officials of downplaying the issue in an attempt to avoid disrupting international ties. They now ask how President-elect Joseph R. Biden Jr. and his nominee for secretary of state, Antony J. Blinken, will respond, especially given the new scientific findings.

The State Department gave the report to some congressional officials and others on Thursday and Friday and told them not to share it, after lawmakers had pressured the agency for months to release the report. The Times and NBC News separately obtained the report on Friday, and NBC earlier reported the findings.

”We are pleased this report is now out and can add to the data and analyses that may help us come to an eventual conclusion as to what transpired,” the State Department said in a statement on Saturday.

The department also said that “each possible cause remains speculative” and that various factors, including the committee’s lack of access to some information because of potential security concerns, “limit the scope of the report,” though “they do not lessen its value.”

For the Trump administration, acknowledging that the incidents were the result of a foreign attack could have necessitated evacuating American missions in China, disrupting an important economic relationship. The administration did take a harder approach in Cuba, which aligned with its larger goal of reversing President Barack Obama’s diplomatic opening with Havana.

The question of Moscow’s possible culpability is a thorny one, given the sensitivities around President Trump on any matters involving Russia or President Vladimir V. Putin. Moscow has denied any role, and Gina Haspel, the C.I.A. director, has not concluded the Kremlin was responsible. But some C.I.A. analysts who are Russia experts, diplomats and scientists contend that evidence points to Moscow, which has a long history of experimenting with the technology. 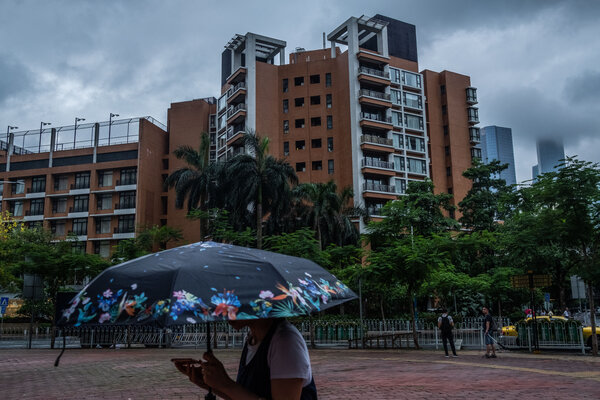 The report does not point to a perpetrator, though it mentions “significant research in Russia/U.S.S.R.” on pulsed radiofrequency technology, as well as the exposure of military personnel in Eurasian communist countries to microwave radiation. The Soviet Union bombarded the American Embassy in Moscow with microwaves in the 1970s and ’80s. In a 2014 document, the National Security Agency discussed a microwave weapon used by a hostile country, which people familiar with the document said was Russia.

Mark Lenzi, a diplomatic security officer who was afflicted with the symptoms while working in Guangzhou, China, in early 2018, said that the administration’s treatment of its employees, including its efforts to “deny and cover up inconvenient scientific and medical facts,” had left him angrier at his own government than the government that injured him.

“My government looked the other way when they knew I and my family were injured,” he said. “This report is just the beginning and when the American people know the full extent of this administration’s cover-up of the radiofrequency attacks in China in particular they will be outraged.”

The report by the National Academies also contains a stark warning about the possibility of future incidents, and the U.S. government’s ability to detect them, or to mount a response. The fact that American government employees reported afflictions not only in Cuba and China but also in Russia and other countries raises questions about how widespread the incidents may be.

The committee was not in a position to assess “specific scenarios involving malevolent actors,” David Relman, a Stanford University professor who led the committee, wrote in a preface to the report. Yet, he said, “the mere consideration of such a scenario raises grave concerns about a world with disinhibited malevolent actors and new tools for causing harm to others.”

The report recommends that the State Department act now to establish plans and protocols so it can immediately begin an investigation if similar incidents occur in the future.

“The larger issue is preparedness for new and unknown threats that might compromise the health and safety of U.S. diplomats serving abroad,” the report concludes. “The next event may be even more dispersed in time and place, and even more difficult to recognize quickly.”

The panel said its findings were hampered by the government’s slow and uneven response to the incidents, in which different patients were evaluated by various methods and clinicians at different points in their illness. It also said that the information made available on patients from China was “too sparse and fragmentary to be able to draw any substantive conclusions about these cases,” and therefore the report focuses on events surrounding the U.S. Embassy in Havana.

The scientists sent the report to the State Department in August, and agency officials there then put it under review. Lawmakers pressed the department to publicly disclose the findings, saying its failure to release the information fit with a pattern of secrecy and inaction by the Trump administration. In interviews in October, Mr. Relman criticized the department for not acting faster to release the report.

Some victims said at the time that the Trump administration was trying to avoid addressing its shortfalls toward the safety of U.S. government employees overseas, especially ahead of the November elections. Asked in late October by a reporter about the illnesses, Mr. Pompeo did not mention the report and said only that the government was unable to determine the cause.

Several lawmakers have forcefully pressed the State Department to be more accountable and provide proper health and work compensation benefits to all of the victims and affected family members. Senator Jeanne Shaheen, Democrat of New Hampshire, has inserted a provision on long-term benefits into the latest defense budget bill that Congress is expected to pass this month, though Mr. Trump has threatened to veto the measure for reasons unrelated to the provision.

“Their illnesses and suffering are real and demand a response from Congress,” Ms. Shaheen said. “While I’m encouraged by the progress we’re seeing, much more must be done to uncover the source of these incidents and ensure that no other public servant suffers in this way.”