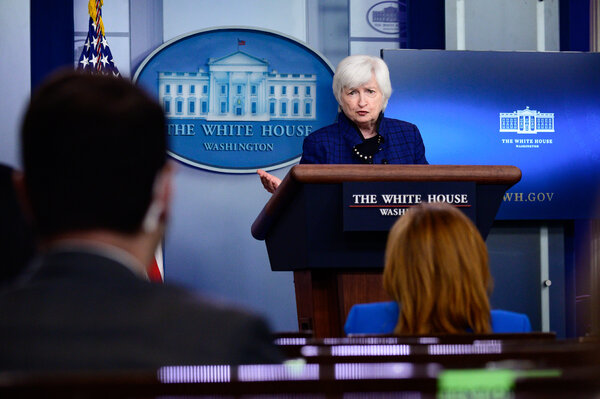 Treasury Secretary Janet L. Yellen warned on Thursday that her agency lacked sufficient resources to oversee an economic recovery that still has “a long road ahead” and called on Congress to provide her with more funds to oversee a sprawling set of relief programs.

In testimony before a House appropriations subcommittee, Ms. Yellen expressed confidence that the end of the pandemic recession was in sight, but said that the Treasury Department is facing an overwhelming task in disbursing hundreds of billions of dollars of relief money with the same budget that it had a decade ago. The Treasury Department has been central to the federal government’s response to the health crisis, funneling stimulus payments and aid to millions of Americans, states, cities and businesses.

“Our team has done valiant work implementing these programs with the resources at our disposal,” Ms. Yellen said in prepared remarks. “But we cannot continue to be good stewards of this recovery — and tackle the new bodies of work that Congress assigns to us in the years beyond — with a budget that was designed for 2010.”

The call for more funding comes as the Biden administration will formally propose a $6 trillion budget on Friday.

Ms. Yellen said that Treasury’s Domestic Finance, Economic Policy, and Tax Policy offices have all seen their budgets cut by about 20 percent since 2016, during the Trump administration. She noted that the Internal Revenue Service, which has seen its budget gutted in the last decade, has been responsible for making approximately $800 billion in stimulus payments in the last year and is now getting ready to start making monthly payments of the expanded child tax credit.

Making the case for beefing up the I.R.S., Ms. Yellen said that $7 trillion of government tax revenue is likely to fall through the cracks in the next decade because the agency lacks the staff to crack down on tax cheats.

Ms. Yellen is expected to face questions from lawmakers on the trajectory of the recovery, the threat of inflation and her remarks earlier this month that interest rates might need to rise as the economy recovers.