As President-elect Joseph R. Biden, Jr. prepares to take office this week, his administration and the Federal Reserve are pointed toward a singular economic goal: Get the job market back to where it was before the pandemic hit.

The humming labor backdrop that existed 11 months ago — with 3.5 percent unemployment, stable or rising work force participation and steadily climbing wages — turned out to be a recipe for lifting all boats, creating economic opportunities for long-disenfranchised groups and lowering poverty rates. And price gains remained manageable and even a touch on the low side. That contrasts with efforts to push the labor market’s limits in the 1960s, which are widely blamed for laying the groundwork for runaway inflation.

Then the pandemic cut the test run short, and efforts to contain the virus prompted joblessness to skyrocket to levels not seen since the Great Depression. The recovery has since been interrupted by additional waves of contagion, keeping millions of workers sidelined and causing job losses to recommence.

Policymakers across government agree that a return to that hot job market should be a central goal, a notable shift from the last economic expansion and one that could help shape the economic rebound.

Mr. Biden has made clear that his administration will focus on workers and has chosen top officials with a job market focus. He has tapped Janet L. Yellen, a labor economist and the former Fed chair, as his Treasury secretary and Marty Walsh, a former union leader, as his Labor secretary.

In the past, lawmakers and Fed officials tended to preach allegiance to full employment — the lowest jobless rate an economy can sustain without stoking high inflation or other instabilities — while pulling back fiscal and monetary support before hitting that target as they worried that a more patient approach would cause price spikes and other problems.

That timidity appears less likely to rear its head this time around.

Mr. Biden is set to take office as Democrats control the House and Senate and at a time when many politicians have become less worried about the government taking on debt thanks to historically low borrowing costs. And the Fed, which has a track record of lifting interest rates as unemployment falls and as Congress spends more than it collects in taxes, has committed to greater patience this time around.

“Economic research confirms that with conditions like the crisis today, especially with such low interest rates, taking immediate action — even with deficit finance — is going to help the economy, long-term and short-term,” Mr. Biden said at a news conference on Jan. 8, highlighting that quick action would “reduce scarring in the work force.”

Jerome H. Powell, the Fed chair, said on Thursday that his institution is tightly focused on restoring rock-bottom unemployment rates.

“That’s really the thing that we’re most focused on — is getting back to a strong labor market quickly enough that people’s lives can get back to where they want to be,” Mr. Powell said. “We were in a good place in February of 2020, and we think we can get back there, I would say, much sooner than we had feared.”

The stage is set for a macroeconomic experiment, one that will test whether big government spending packages and growth-friendly central bank policies can work together to foster a fast rebound that includes a broad swath of Americans without incurring harmful side effects.

“The thing about the Fed is that it really is the tide that lifts all boats,” said Nela Richardson, chief economist at the payroll processor ADP, explaining that the labor-focused central bank can set the groundwork for robust growth. “What fiscal policy can do is target specific communities in ways that the Fed can’t.”

The government has spent readily to shore up the economy in the face of the pandemic, and analysts expect that more help is on the way. The Biden administration has suggested an ambitious $1.9 trillion spending package. 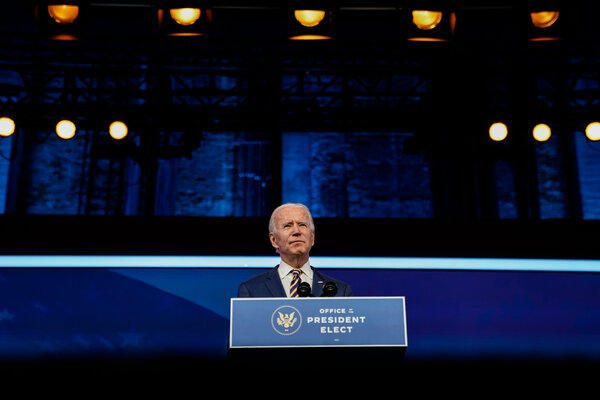 While that probably won’t pass in its entirety, at least some more fiscal spending seems likely. Economists at Goldman Sachs expect Congress to actually pass another $1.1 trillion in relief during the first quarter of 2021, adding to the $2 trillion pandemic relief package passed in March and the $900 billion in additional aid passed in December.

That would help to stoke a faster recovery this year. Goldman economists estimate that the spending could help to push the unemployment rate to 4.5 percent by the end of 2021. Joblessness stood at 6.7 percent in December, the Bureau of Labor Statistics said earlier this month.

Such a government-aided rebound would come in stark contrast to what happened during the 2007 to 2009 recession. Back then, Congress’s biggest package to counter the fallout of the downturn was the $800 billion American Recovery and Reinvestment Act, passed in 2009. It was exhausted long before the unemployment rate finally dipped below 5 percent, in early 2016.

At the time, concern over the deficit helped to stem more aggressive fiscal policy responses. And concerns about economic overheating pushed the Fed to begin lifting interest rates — albeit very slowly — in late 2015. As the unemployment rate dropped, central bankers worried that wage and price inflation might wait around the corner and were eager to return policy to a more “normal” setting.

But economic thinking has undergone a sea change since then. Fiscal authorities have become more confident running up the public debt at a time of very low interest rates, when it isn’t so costly to do so.

Fed officials are now much more modest about judging whether or not the economy is at “full employment.” In the wake of the 2008 crisis, they thought that joblessness was testing its healthy limits, but unemployment went on to drop sharply without fueling runaway price increases.

In August 2020, Mr. Powell said that he and his colleagues will now focus on “shortfalls” from full employment, rather than “deviations.” Unless inflation is actually picking up or financial risks loom large, they will view falling unemployment as a welcome development and not a risk to be averted.

That means interest rates are likely to remain near zero for years. Top Fed officials have also signaled that they expect to continue buying vast sums of government-backed bonds, about $120 billion per month, for at least months to come.

Still, some analysts warn that today’s policies could result in future problems, like runaway inflation, financial market risk-taking or a damaging debt overhang.

In the mid-to-late 1960s, Fed officials were tightly focused on chasing full employment. As they tested how far they could push the job market, they did not try to head inflation off as it crept up and saw higher prices as a trade off for lower joblessness. When America took its final steps away from the gold standard and an oil price shock hit in the early 1970s, price gains took off — and it took massive monetary belt-tightening by the Fed and years of serious economic pain to tame them.

There are reasons to believe that this time is different. Inflation has been low for decades and remains contained across the world. The link between unemployment and wages, and wages and prices, has been more tenuous than in decades past. From Japan to Europe, the problem of the era is weak price gains that trap economies in cycles of stagnation by eroding room to cut interest rates during time of trouble, not excessively fast inflation.

And economists increasingly say that, while there may be costs from long periods of growth-friendly fiscal and monetary policy, there are also costs from being too cautious. Tapping the brakes on a labor market expansion earlier than is needed can leave workers who would have gotten a boost from a strong job market on the sidelines.

The period before the pandemic showed just what an excessively cautious policy setting risks missing. By 2020, Black and Hispanic unemployment had dropped to record lows. Participation for prime-age workers, which was expected to remain permanently depressed, had actually picked up somewhat. Wages were climbing fastest for the lowest earners.

It’s not clear whether 3.5 percent unemployment will be the exact level America will achieve again. What is clear is that many policymakers want to test what the economy is capable of, rather than guessing at a magic figure in advance.

“There’s a danger in computing a number and saying, that means we are there,” Mary C. Daly, the president of the Federal Reserve Bank of San Francisco, said at an event earlier this month. “We’re going to learn about these things experientially, and that to me is the right risk management posture.”