The action is a sign that the bank is less worried about inflation than the economic distress caused by the pandemic. 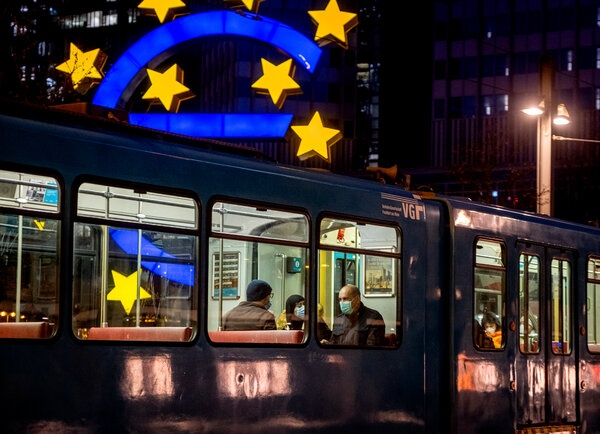 The European Central Bank moved Thursday to counteract market forces that are driving up borrowing costs worldwide, saying it would speed up its purchases of government and corporate bonds to make sure that credit in the eurozone remained cheap.

The action by the bank signaled that it was less worried about inflation than the economic distress caused by the pandemic and the likelihood that the eurozone was in recession.

The bank had earlier allocated 1.85 trillion euros, or $2.2 trillion, to fight the effects of the pandemic and keep borrowing costs low. That sum remains unchanged, but the bank will now buy bonds “at a significantly higher pace than during the first months of this year.”

Interest rates in the bond market have been rising in recent weeks because investors are worried that inflation could rise when growth bounces back. Investors have been less willing to buy bonds at the same exceptionally low rates as before.

But Christine Lagarde, the central bank’s president, told reporters Thursday that a recent increase in inflation was caused by higher energy prices and other temporary factors.

“Underlying price pressures remain subdued in the context of weak demand and significant slack in labor and product markets,” Ms. Lagarde said after a meeting of the bank’s Governing Council. She added that she expected the eurozone economy to shrink in the first quarter of 2021, the second quarterly decline in a row, because of the slow pace of vaccinations and extended lockdowns.

Prices in the eurozone rose at an annual rate of 0.9 percent in March after falling for the last five months of 2020. Some economists expect prices to rise further as the effects of President Biden’s $1.9 trillion stimulus plan spill over into Europe.

Ms. Lagarde said that the Governing Council did not take the U.S. stimulus plan into account because it had not yet been signed into law. The bill, which received final congressional approval this week, is expected to be signed by Mr. Biden on Friday.

The action announced on Thursday sends a strong signal to financial markets, which have been testing the central bank’s commitment to keep lending costs low in the eurozone while governments, corporations and individuals struggle through the pandemic.

Soon after the announcement, yields on 10-year German government bonds fell four basis points, to minus 0.36 percent. That is still higher than earlier this year, when they were minus 0.6 percent.

Bond yields feed into the broader economy because they set a benchmark for the rates that businesses pay for commercial loans and that individuals pay for mortgages and car loans.

On Thursday, Ms. Lagarde repeated several times an earlier promise to ensure “favorable financing conditions,” a phrase that has effectively become her mantra.

“Our monetary policy will contribute to taking economies across the bridge of the pandemic we have been suffering from,” Ms. Lagarde said.

On Wednesday, after the Governing Council had begun its meeting, Greenpeace activists landed motorized paragliders on the roof of the central bank’s high-rise headquarters in Frankfurt, Germany, and unfurled a banner reading, “Stop Funding Climate Killers!”

Ms. Lagarde said on Thursday that she was “on the same page” with the activists in many ways, but added, “We don’t think this is the necessary way to conduct a dialogue.”