PARIS — The European Union said Monday that it would begin imposing sweeping tariffs on around $4 billion worth of American aircraft, food, drinks and other products beginning Tuesday, an action cleared by the World Trade Organization last month after it said Europe could retaliate against the United States for years of illegal subsidies given to Boeing.

The decision, which stems from a 16-year-old dispute before the global trade body, comes after the Trump administration last year decided to impose tariffs on as much as $7.5 billion in European exports annually as retaliation for what the W.T.O. ruled were illegal subsidies given to the European airplane maker Airbus, Boeing’s main rival.

European officials, however, say they are hoping for a settlement between the two countries that would end to the tit-for-tat tariffs once and for all, perhaps even before President Trump leaves office on Jan. 20 to make way for President-elect Joseph R. Biden Jr., according to a European Union official with knowledge of the cases who spoke on the condition of anonymity in order to discuss private negotiations.

It remains to be seen if the European tariffs will encourage the United States to negotiate — or if they further inflame a trans-Atlantic trade spat where the Trump administration has vowed not to bend. Last month, Mr. Trump threatened retaliation if the European Union went ahead with its levies.

“If they strike back, then we’ll strike back harder than they’ll strike. They don’t want to do it,” Mr. Trump told reporters.

In a statement Monday afternoon, Robert E. Lighthizer, the United States trade representative, said the U.S. “is disappointed” by the European Union’s decision.

“The alleged subsidy to Boeing was repealed seven months ago,” Mr. Lighthizer said, referring to a Washington State tax break that was rescinded last spring. “The E.U. has long proclaimed its commitment to following W.T.O. rules, but today’s announcement shows they do so only when convenient to them.”

Boeing and Airbus have taken steps to remove subsidies and fiscal support that had been deemed illegal by the W.T.O., opening the door to both sides entering into a negotiated settlement quickly, said the official, who was not authorized to speak publicly about the matter.

In a statement, Boeing said that it was “disappointing and surprising” that the European Union had decided to impose the tariffs, saying that the burden would eventually fall on Europe-based workers, suppliers and customers as well. “Instead of escalating this any further, we hope that Airbus and the E.U. will take meaningful action to resolve this trade dispute,” the statement said.

At a media briefing in Brussels, Valdis Dombrovskis, executive vice president of the European Commission, called on the United States to come to the table and urged both sides to “drop existing countermeasures with immediate effect so we can quickly put this issue behind us.”

Removing the tariffs “would represent a strong win-win for both sides,” he said. “We now have an opportunity to reboot our trans-Atlantic cooperation.” 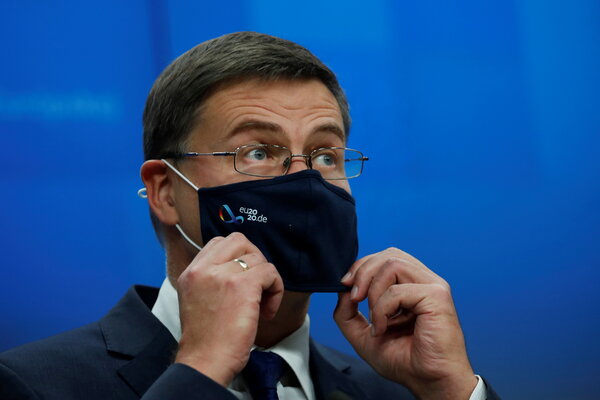 Peter Altmaier, Germany’s federal minister for economic affairs, added that Europe was “ready at any time to talk to the existing or new U.S. administration and withdraw” the tariffs. “We need to do something to avoid further escalation,” he added.

Any discussions, should they take place, may not be easy. Both sides have said they want to avoid inflaming a trade war, but a stumbling point is a standing demand by the Trump administration that Europe repay previous subsidies received by Airbus, the European official said. The W.T.O. rulings require only that companies halt current illegal financial support — not repay previous subsidies.

And it was not immediately clear whether the Trump administration would be interested in negotiating a settlement before Mr. Biden takes office.

Mr. Lighthizer added that the United States was determined to find a resolution to the dispute, but that it was still waiting for the European Union to provide a response to a previous U.S. proposal.

Chris Swonger, the president of the Distilled Spirits Council of the United States, said the tariffs would be a “major blow to the U.S. spirits industry,” which is struggling because of the coronavirus pandemic. The European Union already imposed levies on American whiskey in 2018 as retaliation for Mr. Trump’s tariffs on foreign steel and aluminum.

Both sides have argued that the support amounted to illegal financial aid that allowed each plane maker to sell its products at unfairly low prices around the world, stifling competition and sales.