Wetherspoons has suffered its biggest loss on record after coronavirus restrictions ravaged the hospitality industry.

Latest COVID updates from the UK and around the world 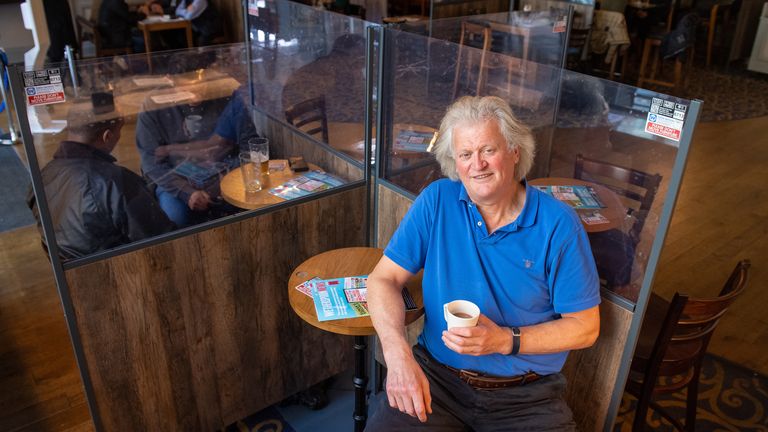 Despite this, founder and chairman Tim Martin said he was “cautiously optimistic” about the firm’s future financial prospects provided there were no further COVID-19 lockdowns or restrictions, which he branded “a threat to civil society and democracy”.

However, attracting staff has proved difficult in some areas, particularly “staycation” locations such as the far South West.

On current trading, Wetherspoons reported in the past nine weeks sales were 8.7% below the levels for the same period pre-pandemic, but that this had continued to improve and was just down by 6.4% in the past four weeks.

Total employee numbers averaged 39,025 in the financial year, but had increased to 42,003 towards the end of September, indicating recruitment was working.

Mr Martin said: “On average, Wetherspoon has received a reasonable number of applications for vacancies, as indicated by the increase in employee numbers, but some areas of the country, especially ‘staycation’ areas in the West Country and elsewhere, have found it hard to attract staff.

“During the pandemic, the pressure on pub managers and staff has been particularly acute, with a number of nationwide and regional pub closures and reopenings, often with very little warning, each of which resulted in different regulations.”

He added: “In spite of these obstacles, Wetherspoon is cautiously optimistic about the outcome for the financial year, on the basis that there is no further resort to lockdowns or onerous restrictions.”

Pubs were one of the hardest-hit sectors during the coronavirus pandemic, facing lengthy closures and rule changes, although they have also been entitled to government support in furlough scheme payments, VAT holidays and local authority grants.