Global indices have lost, on average, almost a third of their values in just the past month as investors have reacted to the spread of COVID-19 and the speed by which it has forced everyday life to be closed down.

Despite a renewed wobble in the US and Europe on Monday, Asian markets reacted positively on Tuesday to moves by the US central bank to bolster asset purchases – bond-buying – by an unlimited amount to support market functionality.

The Nikkei in Tokyo jumped by 7% to record its biggest daily increase in more than four years.

In Europe, the FTSE 100 opened 4% higher – recovering its losses of the previous day – while the CAC in Paris and Germany’s DAX also ticked up by 4% and 6% respectively.

Banks were among the big winners in London.

The Dow Jones Industrial Average on Wall Street was tipped to open almost 5% up.

Market falls of recent weeks have stuttered as a growing number of central banks and governments, including those in the UK, have announced action to mitigate the effects of virus disruption on markets, businesses and workers.

The stimulus measures are aimed at limiting the effects of what is likely to be a deep, but potentially short, global recession.

James Knightley of ING said in a report: “The pressure is now on Congress to get its act together and provide the support that the Fed cannot do – helping the vulnerable people who face the biggest health and economic consequences.” 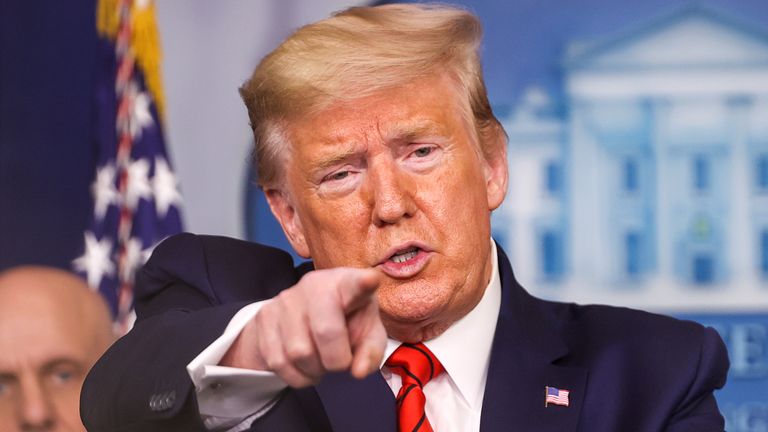 However, it is feared that deep political rivalries in the wake of the failed impeachment process against President Trump, may be hampering negotiations to agree the US government’s planned stimulus package.

It would send cheques to US households and offer support for small businesses and the hard-hit travel industry, but Democrats say it favours companies too heavily at the expense of workers and public health and blocked a vote to advance the measures.

Ahead of the market open in London, there was another deluge of listed companies reporting on their status.

Mulberry, the leather goods retailer, confirmed it was among chains to have temporarily closed its doors while warning investors that it now expected to report a small loss for the second half of its financial year to 28 March.

It blamed a recent slump in trading, particularly in the UK.

Banking group Santander said its chairman and chief executive would be taking cuts of 50% to their total pay packages while announcing a fund in support of medical equipment to aid coronavirus patients.

JD Sports, which has closed all its UK stores unlike rival Sports Direct, said it was unable to give guidance on its financial year and delayed the publication of its results for the year to 1 February.