Ryanair’s boss has accused Sir Richard Branson of trying to “fleece” the British taxpayer as Virgin Atlantic bids for a government loan to stop it collapsing.

Speaking to Sky News, he said Sir Richard Branson had more than enough money to cover Virgin Atlantic’s needs beyond wages, after Delta – which owns 49% of Virgin – refused a bailout. 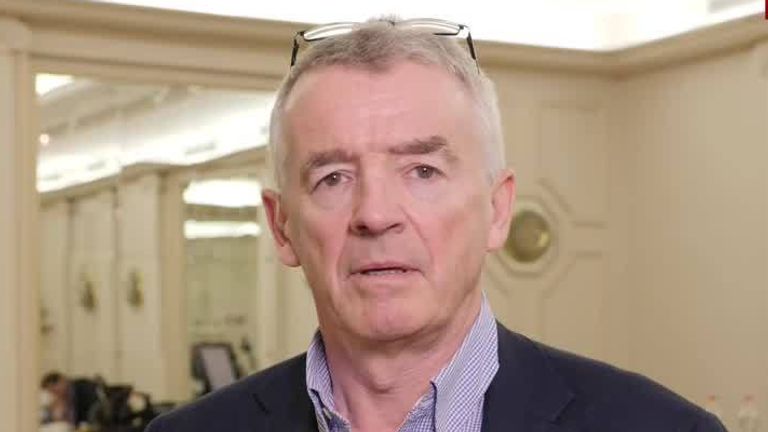 Sir Richard revealed in a letter to staff this week that he had offered his luxury island home Necker as security against a government loan – believed to be up to £500m – and that he was also seeking help from the Australian government to save Virgin Australia.

Just hours later, it was confirmed that Virgin Australia had entered voluntary administration.

“Frankly if he’s worried about Virgin he should write the cheque himself. It’s not like he’s short of money.”

He also compared Lufthansa to a “crack cocaine junkie” after it requested €10bn (£8.7bn) from the German government.

Mr O’Leary told Sky’s Ian King Live show that he expected his airline to be flying around 40% of its services by late June or early July.

But he warned any condition that middle aisle seats be left empty to maintain social distancing, a move that will be adopted by rival easyJet, must be paid for by governments.

He also apologised for delays to refund payments amid frustration over how long it is taking customers to get their money back.

He urged people to choose flight vouchers because it is an automated system, insisting Ryanair was doing its best but that it could take months for a cash refund to be processed.

“In a normal month, we process about 10,000 refunds for occasional flight cancellations – things like that,” said Mr O’Leary.

“We’re staffed up for that. At the moment, we’re working with about a quarter of the normal refund staff because of social distancing and bans on people travelling to work.

“But we’re dealing… just in the month of April with 10 million refunds because all the fights have been cancelled.