Retail, pub and travel stocks have plunged in reaction to the looming coronavirus lockdown in England.

While the FTSE 100 recovered some ground lost last week amid the spread of fresh COVID-19 restrictions across Europe’s largest economies, there was pain for the sectors exposed to the tightening of activity announced on Saturday by Boris Johnson.

Aviation and travel-related shares felt the worst backlash at the market open, with British Airways’ owner IAG and easyJet retreating by 6% as Ryanair confirmed the extent of the financial toll it had witnessed to date and rued advice not to travel abroad. Fashion retailers were also targeted, with Next and JD Sports Fashion among the biggest losers, while Primark – a pure bricks-and-mortar operator – warned of a £375m hit from lost sales across Europe during the latest lockdowns.

England’s new restrictions, due to be implemented on Thursday, will see non-essential retail closed until 2 December.

Those parts of the retail sector that are set to remain open through the latest economic disruption – such as supermarkets – were beneficiaries.

Tesco, Sainsbury’s and Ocado shares were all strongly up.

In Ocado’s case, its stock saw the largest gains – of more than 8% – as it ramped up profit guidance citing “strong” sales since the start of its grocery delivery partnership with Marks & Spencer.

It said shoppers were continuing to migrate to online shopping in record numbers and also announced the acquisition of two robotics companies as part of investment in its warehouse technology arm – the part of the business that has proved most lucrative for investors over the past few years thanks to partnership deals. 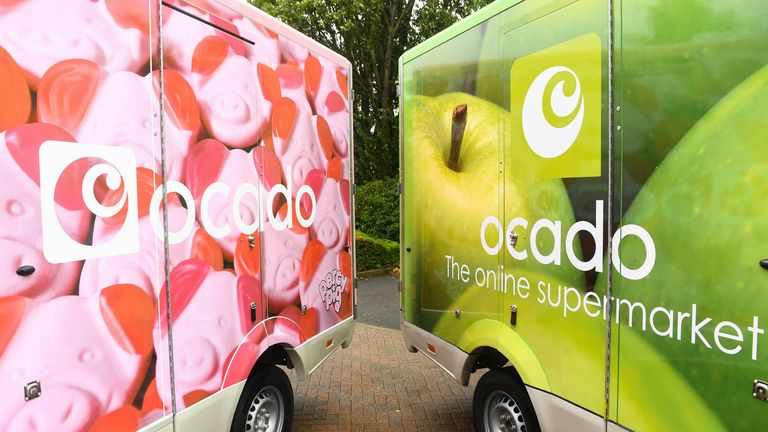 Pub groups JD Wetherspoon and Mitchells & Butlers were among the other UK fallers while Just Eat Takeaway saw gains.

Falls in sterling’s value tend to boost the value of constituent companies with strong dollar earnings as they are worth more when booked back in Britain.

Positive economic data from China also boosted sentiment at the start of, what is expected to be, a potentially volatile week given the evolving virus crisis and US presidential election.

The domestically focused FTSE 250 was trading slightly down, however, reflecting worries over the economic hit from England’s second lockdown and the possibility of wider restrictions in Scotland too.

Business groups have warned that while an extension of the furlough scheme until 2 December will help workers, companies face financial disaster from further loss of earnings.

BCC director general Dr Adam Marshall said: “There’s no getting around the fact that these new restrictions will be a
devastating blow to business communities who have done everything in their power to adapt and operate safely.

“Business and market confidence have been hit hard by the unclear, stop-start approach taken by governments across the UK over the past eight months, with little end in sight.

“Many firms are in a much weaker position now than at the start of the pandemic, making it far more challenging to survive extended closures or demand restrictions.”