The clock was ticking for David Hamamoto.

It was June 2020, and Mr. Hamamoto, a former Goldman Sachs executive who invested in real estate, was searching for a business to take public through a merger with his shell company. He had raised $250 million from big Wall Street investors including BlackRock, and spent more than a year looking at over 100 potential targets. If he couldn’t close a deal soon, he would have to return the money.

Then, around nine months before his deadline, bankers from Goldman gave Mr. Hamamoto an enticing pitch: Lordstown Motors, the fledgling electric truck maker that President Donald J. Trump had hailed as a savior of jobs. What followed was a swift merger, then a debacle that put two of the biggest forces shaping the financial world on a collision course.

Lordstown went public in October via a merger with Mr. Hamamoto’s special purpose acquisition company, DiamondPeak Holdings. A Wall Street innovation, SPACs are all the rage, having raised more than $190 billion from investors since the start of 2020, according to SPACInsider. At the same time, small investors have become a potent force in the markets, driving up the stock prices of companies like GameStop and lapping up shares of SPACs, which are highly speculative and can pose financial risks.

In Lordstown, those forces eventually collided, highlighting the uneven playing field between Wall Street and Main Street. Small investors began piling into Lordstown shares after the merger closed, attracted to the hype around electric vehicles. That’s exactly when BlackRock and other early Wall Street investors — as well as top company executives, who all got their shares cheaply before the merger — began to sell some of their holdings.

Now Lordstown is flailing. Regulators are investigating whether its founder, Steve Burns, who resigned as chief executive in June, overstated claims about truck orders. The heat is on Mr. Hamamoto. The company has burned through hundreds of millions of dollars in cash. Its stock price has plunged to $9, from around $31. Investors are suing, including 70-year-old George Troicky, who lost $864,201 on his investment, according to a pending class-action lawsuit.

And Lordstown has yet to begin producing its first truck.

A native of Hawaii, Mr. Hamamoto began his career at Goldman Sachs, where he helped run the bank’s real estate investment companies, known as the Whitehall Street funds. He became one of Goldman’s youngest partners before striking out on his own in 1997. Mr. Hamamoto, 61, has owned or operated splashy hotels, office buildings and nursing homes, eventually teaming up with others to build a real estate investment firm, NorthStar Investment.

Stephen Cummings, who has known Mr. Hamamoto for 15 years and served on the board of one of his companies, said the investor “has been successful because he is smart, creative and consistently reliable,” and has always kept the interests of all his shareholders at heart.

In 2017, NorthStar merged with Colony Capital, a firm run by Mr. Trump’s longtime ally Thomas J. Barrack Jr., to create a company with $58 billion in assets. Mr. Hamamoto left the next year, selling stock worth $27 million.

In early 2019, he launched his SPAC, DiamondPeak, with the intention of merging with a real estate business. By the time Goldman took Lordstown to him, Mr. Hamamoto’s team had lost out on several other opportunities, a person familiar with the matter said. He was eager to do a deal.

Mr. Hamamoto, along with members of his team and Goldman bankers, made at least two visits to the Lordstown factory in Lordstown, Ohio, to meet with Mr. Burns in June last year, according to regulatory documents. The company also shared additional information about itself with DiamondPeak.

Since he knew little about electric vehicles, Mr. Hamamoto hired McKinsey to assess whether the technology that Lordstown had licensed from others could be put together to build an electric truck, several people briefed on the matter said. The consulting firm said the technology was viable, and the deal came together in weeks.

Mr. Hamamoto’s scrutiny of Lordstown’s business was most likely far less than the inspection that a company undergoes in a conventional initial public offering. In an I.P.O., a company is held to strict reporting standards about its finances and prospects. By contrast, SPAC mergers give companies that would find it challenging to go public on their own an easier path to the public markets.

Lordstown also operated in an industry with one of the lowest rates of success; few start-ups have succeeded at mass producing electric vehicles. Even Tesla, the industry’s breakout star, didn’t deliver its first car until 2008 — five years after it was founded. And Rivian, a start-up that will begin delivering electric pickup trucks this year, has been working on its vehicles for more than 10 years.

So for a company like Lordstown — which had no revenue and no truck for sale — to succeed, having a management team that could oversee such a complicated endeavor was all the more important. But Mr. Hamamoto didn’t focus much on assessing the work experience of Lordstown’s management team, including Mr. Burns, who would continue to run the company after the SPAC merger, two people familiar with the matter said. 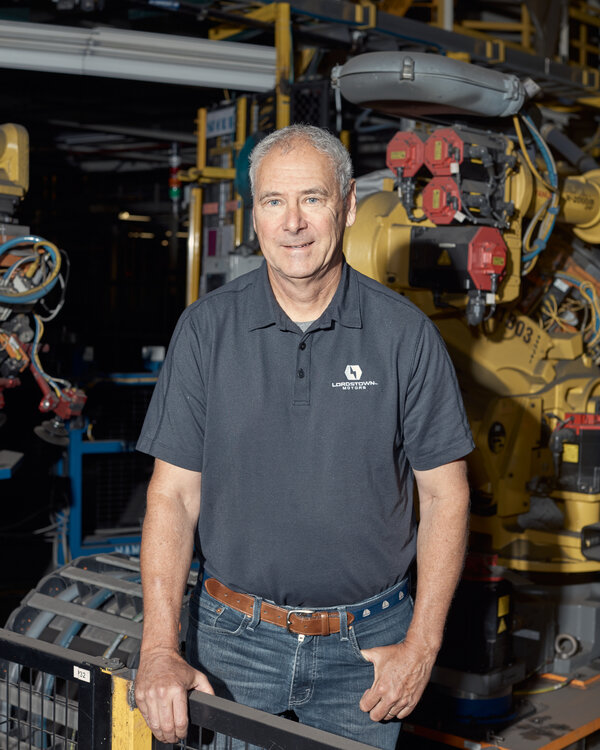 Mr. Burns, who fancied himself as the next Elon Musk, was known as a persuasive talker, prone to hyperbole, former Lordstown employees said. One said Mr. Burns liked to engage in “magical thinking,” behaving as if he could will things into existence.

At the rollout of Lordstown’s Endurance truck on June 25, 2020 — which was attended by Mr. Hamamoto and Goldman bankers, who by then were deep in merger talks with Lordstown — Mr. Burns was quoted in TechCrunch saying the company already had 20,000 pledges to order its truck and planned to begin producing the vehicle by summer 2021. In November, Mr. Burns said there were 50,000 “serious” orders, and in January the number shot up to 100,000.

Although he had previously run a public company, the electric vehicle start-up Workhorse Group, his record there was spotty. Mr. Burns, 62, left Workhorse in February 2019 to start Lordstown, leaving behind years of losses and a company that produced just a few hundred vehicles. At Workhorse, he often touted the viability of a personal hybrid-electric helicopter called Surefly — a vehicle that had never proved commercially viable.

Neither Mr. Hamamoto nor his representatives talked to executives at Workhorse about Mr. Burns’s stewardship or what had motivated him to suddenly resign and later pursue the factory in Ohio, a person briefed on the merger process said. General Motors sold the plant to Mr. Burns in November 2019 for $20 million, prompting Mr. Trump’s praise for the Lordstown founder.

Erik Gordon, a business professor at the University of Michigan, said Mr. Hamamoto had an obligation to check into all aspects of Lordstown before signing the deal, including Mr. Burns’s abilities to run a large public company.

A representative for Mr. Hamamoto said, “DiamondPeak performed extensive due diligence of Lordstown.”

Mr. Hamamoto declined to be interviewed. In a statement, he said: “During our diligence prior to entering into our business combination, it was clear that we have the technology and the assets to develop the first and best full-size all-electric pickup truck.” He added that “the board, management and the entire team are focused on making Lordstown Motors a success as we transition to the commercial stage of our business.”

Goldman, which was working with Mr. Hamamoto and arranged $500 million in additional financing for the acquisition, ran only a standard background check on Mr. Burns — a public-records search that took more effort than simply looking him up on Google but stopped short of any interviews, a person familiar with the bank’s activities said.

Mr. Burns did not respond to requests for comment.

In early August, news of the merger of DiamondPeak and Lordstown drove shares of the SPAC up 20 percent. Small investors, who have become active players in the stock market in recent years, were among those driving up the price.

One investor was Maximillian Lawrence, an artist and a high school teacher in Philadelphia. Mr. Lawrence, 46, said he believed Lordstown would succeed largely because of the implicit backing of G.M. — which had by then invested $75 million in Lordstown — and viewed it as a “long-term holding” in his portfolio.

In late September, Mr. Burns showed off a prototype of the Endurance truck at the White House — an unveiling attended by Mr. Trump. Between October, when the company started trading on Nasdaq under the symbol RIDE, and March, the stock continued to climb.

With Lordstown shares trading around $18 in November, George Troicky, a self-employed investor from Cleveland, dived in, and he continued to buy over the next few months. Mr. Troicky, who lost close to a million dollars on his investment, later said in his lawsuit that he had based his decision “on my own research of publicly available information.” A federal judge recently approved him as the lead plaintiff in the pending class-action lawsuit. A lawyer declined to comment on his behalf, citing the suit.

At the same time, some early Wall Street investors and senior Lordstown executives used the opportunity to sell their stock. BlackRock, which originally owned a little more than 2 percent of the combined company, reported owning about 1 percent in March. Millennium Management, a hedge fund firm, and Fidelity, a mutual fund company, also reduced their stakes, filings show. The firms declined to comment on their holdings.

In February, Lordstown’s president and its former finance chief were among those who sold about $8 million in stock. A few months earlier, other insiders had sold $3 million worth of shares. A special committee of Lordstown’s board reviewed the stock sales and said it had found nothing improper.

Also in February, the Securities and Exchange Commission began investigating Lordstown about statements that Mr. Burns had made about the company’s sales prospects. Recently, federal prosecutors in Manhattan opened their own inquiry.

Mr. Hamamoto, whose investment group once owned a fifth of the SPAC, got some of those shares at a steep discount — meaning that they lose little even if the stock collapses. He and Mr. Burns, who owns 26 percent of Lordstown, are bound by the merger agreement to hold on to their shares until October.

“I still think Lordstown is a great opportunity and they have a great product and a great factory,” Mr. Lukens said.

Mr. Lawrence, the artist, isn’t so sure. He began selling his stock after the company’s bullish predictions didn’t come to fruition and walked away with about $4,000 in profits.

“This was a buyer beware situation,” he said. “I was willing to overlook a lot of things because of the affiliation with G.M. I figured G.M. wouldn’t partner up with some schmucks.”

Mr. Burns and another top executive at Lordstown resigned after its board investigated the company’s statements about truck orders. Two people briefed on the matter said Mr. Burns was already considering a new venture.

Mr. Hamamoto remains at Lordstown, but has floated a new shell company, in which BlackRock is again an investor.

Some small investors continued to buy even as Lordstown unraveled. In March, Djordje Karacic, a 23-year-old information technology worker in Koper, Slovenia, bought the stock after learning that it had licensed technology from Elaphe Propulsion Technologies, a Slovenian firm.

Mr. Karacic, who hasn’t broken even, said he harbored no ill will toward the early investors. “It happens all the time, everywhere,” he said. “We’d be lying to ourselves if we thought this was a fair market.”